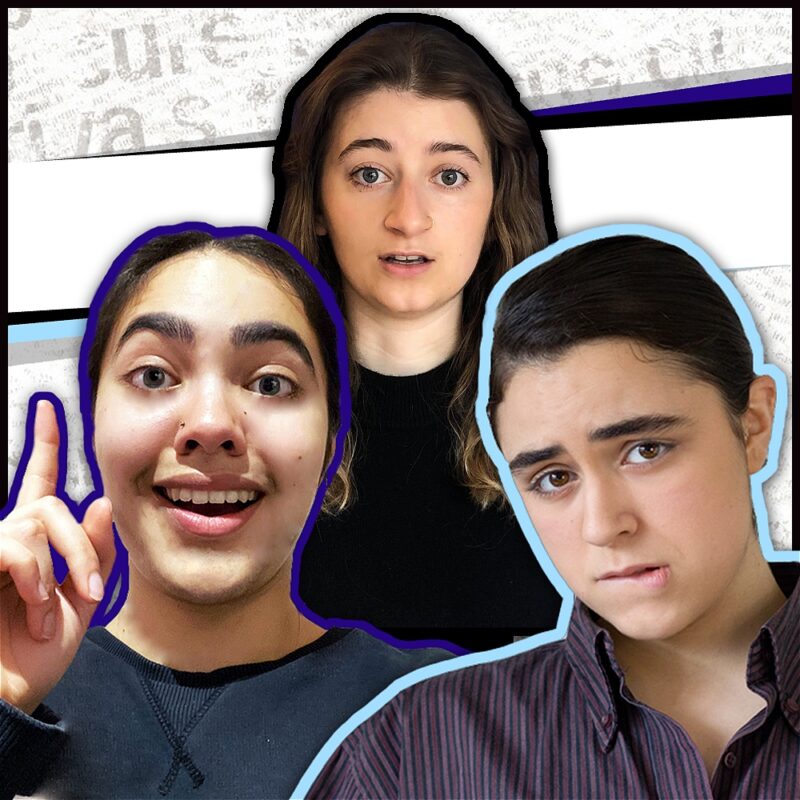 Paperboy, written by Eve Lytollis, is a raucous, albeit cantankerous play which aims to shed light on the perverse coterie of ‘old boys’ who still maintain that women are a source of fascination, are not worthy of respect, and are deserving of an uncomfortable amount of gawking.

The play features two over-privileged and under-qualified journalists, Matt (Giorgia Valentino) and Matthew (Nandini Bulchandani), in their quest to become the perfect journalists. However, their newspaper is bankrolled by Matthew’s father, and the pair rely more on their ‘British charm and intellect’ than any genuine journalistic ability. The paper purports to focus on politics, culture and ‘men’s issues’,  however, as you might expect, it does a poor job of advancing any stories beyond the boys’ narrow minded and conservative social quips. ‘Money is irrelevant to the pursuit of perfect journalism’ says Matthew. To top it all off, in and amongst this small writers room, is their assistant Phoebe (Phoebe Taylor-Jones). She is both an object of curiosity for them and an indicator of their success; they equate being able to hire their own assistant as a mark of professionalism and legitimacy. However, distracted by their own egotism, they leave her with no workload,  instead occupying their time by peacocking around each other, parading their droves of misogyny and office culture banter in front of her.

Their conduct here is largely and intentionally overwrought. Director Amy Tickner creates buffoons out of these men as she contrasts their characters against Phoebe’s. By instructing a realist and emotive tone within her prose and dressing her in ordinary clothes, Tickner renders Phoebe as an anchor of ‘normality’. On the contrary, Matt and Matthew appear ridiculous. Their cord on cord outfits, gelled back hair and their ever wavering depth of voice push them into the realm of caricature. This is emphasised by Matt and Matthew’s portrayal by female actors, which adds a fantastic level of irony to the production. Within in all of their sex jokes, penis size comparisons and chat about women, there is an added layer of mockery. Although this also pedals a sense of pantomime into the fabric of the play, positioning women on the enemy line to illuminate the absurdity of the characters’ stance is a powerful ploy. This is certainly one of the play’s most valuable comedic currencies and yet also pushes the play’s burgeoning tension and discomfort to the fore.

The intricate distinctions between Matt and Matthew are just as fascinating as the covert contrasts of the play, as they grapple with the power dynamic that exists between them. As the play progresses, their own insecurities emerge. It is evident that both men are at odds with their own sense of masculinity,  persistently cloaking themselves in what they believe to be the most ‘macho’ versions of themselves, whether that be aided by a cricket bat, condoms, weights or pejorative phrases. All of their performativity, though largely aimed at Phoebe, is clearly directed towards each other. It is difficult to ignore the entrenched sense of discomfort that these two men clearly feel in their own skin; it is unbeknown to them, but starkly obvious to the audience. Matt merely follows Matthew’s lead, hangs onto his every word and largely models his behaviour on Matthew’s: ‘now’s not the time for nicknames, homeslice’ Matthew advises him during one scene. Meanwhile, Matthew acts primarily according to his sex drive, unable to control his urges and hence coming across as more animalistic than refined. This is, as you might expect, amusing on the surface, but ultimately is construed into problematic views of women, to an almost incel level of operation.

All of this comes to a head in the play’s conclusion, when Phoebe, tired of her boss’ problematic behaviour, quits her job and stands up for herself through a conscientious monologue (the most she has spoken in the whole play). It’s a good monologue insofar as it says all the things that any liberal or moral person would claim ‘here, here’ to, but I can’t help but think that this conclusion detracts from the play’s overall poignancy. The monologue aims to clarify the message of the play – that we are not yet past the plight of gender inequality and that each and everyone of us hold some responsibility in speaking up and calling out that which is unacceptable – but in doing so, it largely undermines the hard work that has gone into the previous hour of the production. Is there much point in watching an entire play, only to be provided with the summary at its close?

Nonetheless, this play is filled with fantastic, funny and grotesque lines. It hammers home an important message and ultimately balances a number of tricky themes. It will certainly make you laugh out loud, whilst also leaving you with a relatively sour taste in your mouth; in this case, the combination of sweet and savoury is well served.