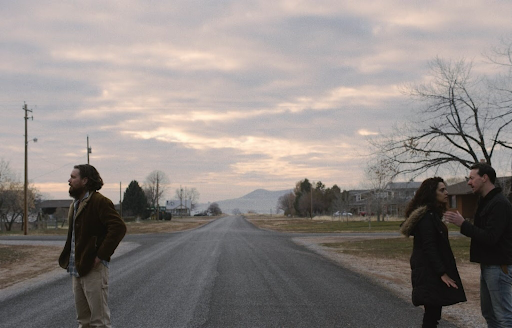 Once in a while, a film comes along so brutally raw that it seems more like a home documentary than a commercially-produced movie. That is the speciality of indie films – often, their low-budget production helps shift the emphasis from grandiose settings and flamboyant costumes to the story, the dialogues, the cinematography and the actors – things that don’t require money, but talent.

The Killing of Two Lovers (2020) certainly falls into that category. Directed by Robert Machoian, a professor of photography in Utah, the movie explores the lives of David and Nikki, a married couple going through a separation. It emphasises David’s experience, coming to terms with their changing relationship while parenting four kids.

The movie opens with David, played by Clayne Crawford, pointing a gun at a couple fast asleep in bed, who we later find out are his wife and her boyfriend, Nikki and Derek. At first glance, the movie seems to be verging towards a murder mystery, with its title foreshadowing an ominous event. This agonising opening scene is immediately juxtaposed with a close-up shot of David taking care of his sick father. While he seemed dangerous and callous at first, he’s now shown to be gentle and caring – signalling that each of us has both a good and evil side, and our actions depend on which urges take over.

The wide-ranging cinematic shots of a scenic town, where each frame could be compared to a painting, the close-ups of an emotionally troubled man, and the peripheral exploration of ramifications on the children are all reminiscent of Kenneth Lonergan’s Manchester by the Sea (2016), a drama about a self-punishing, depressive man’s struggles while taking care of his nephew. Crawford’s remarkable portrayal of a vulnerable, struggling man can be likened to Casey Affleck’s troubled Lee Chandler. The simplicity of the town setting helps mute the background noise and maintain a close focus on the characters lives instead.

Yet as gut-wrenching and powerful as this film was, the middle lacked substance. Watching David make awkward conversations with his kids about school, I wondered whether this time could have been used, instead, to better understand Nikki’s struggles and behaviour. Dialogues involving Jess, the eldest daughter, seemed unnatural and one-dimensional, further highlighting the superficiality of the film’s female characters. Jess’ angst could have been more nuanced and better performed, while Nikki was only presented through David’s perspective, which villainized her: she spent multiple scenes apologising for one action after the next while David huffed and sobbed. While the subjugation of female characters to the periphery is partially justified by David’s character development, one that is pivotal to the plot, they lacked substance and relatability that could have made the film more impactful. Manchester by the Sea, in contrast, did an excellent job of that: its most remarkable scene was the heartfelt confrontation between Lee and his ex-wife, which emphasised how both were struggling with the same grief and emotion.

The Killing of Two Lovers is a complex portrait of the male psyche and a passionate story of two partners’ separation. This film includes stunning landscape shots, and the soundtrack leaves one scrambling for Shazam. Despite not fleshing out the secondary characters to their fullest potential, Machioan brings the audience along for a bumpy ride through one of the most frequent occurrences in the world – break-ups, in a way that feels painful and renewing at the same time.

The Killing of Two Lovers was released in Curzon Cinemas on 4 June.