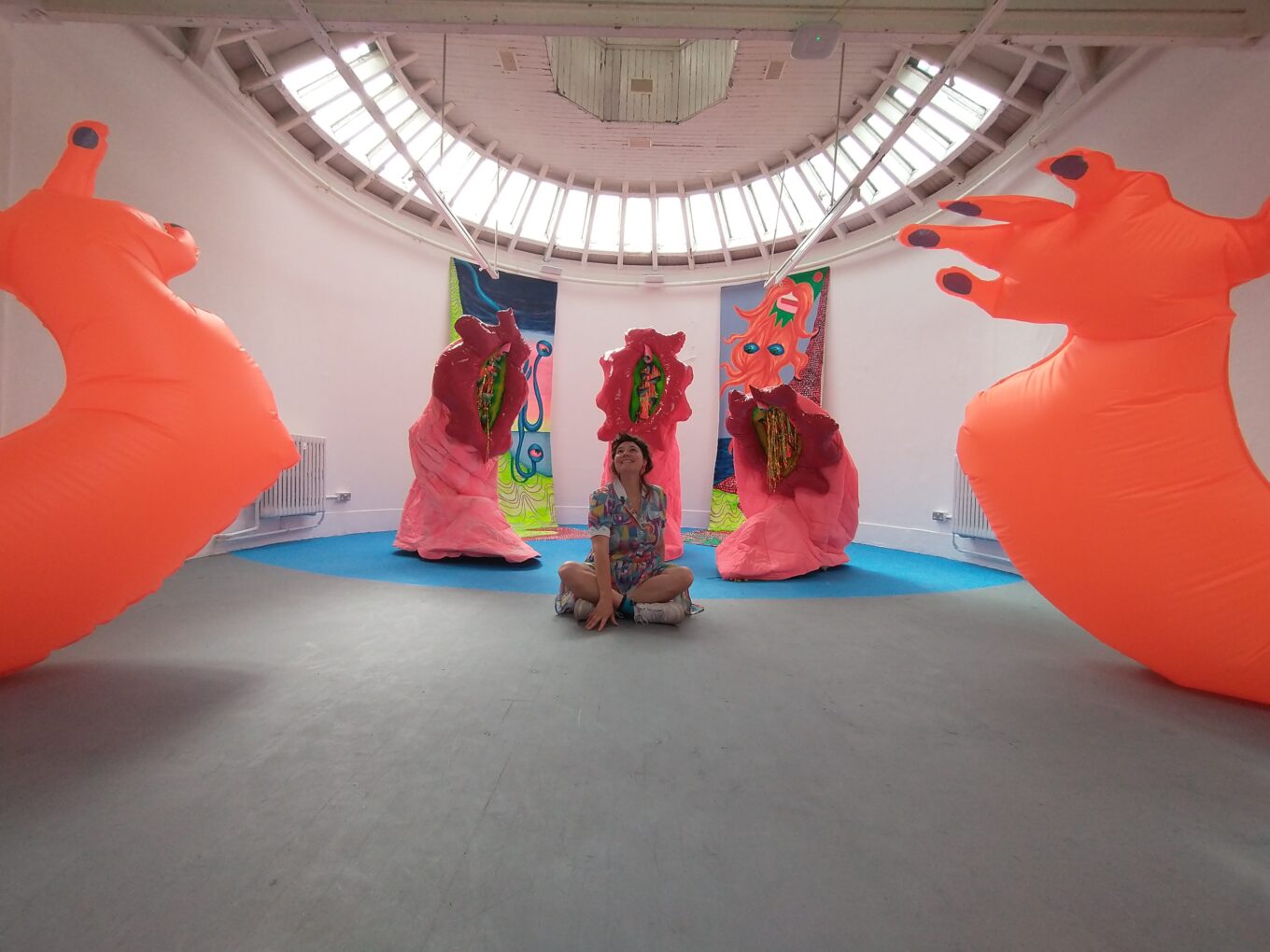 WILL FERREIRA DYKE catches up with master’s graduate FLORA BRADWELL to discuss her final year at Slade, her creative process, and dream project, before the artist heads off on a month-long residency in Cyprus.

Flora has exhibited in numerous international shows; this last year alone she has shown at the New Futures Digital (Kovert Gallery, London), Tehom (SIM Gallery, Reykjvaik) and digital show The Birthday Party (The Artists Contemporary). Most recently, Flora worked on  HOT AIR, an inflatable art exhibition by BAD ART, of which Flora acts as co-director, as well as putting together a momentous piece for the Slade MFA graduate show.

To start off, how have you been doing? I believe you’ve graduated!

Yes, I graduated from my MFA this month, which is mad! I’d deferred for a year, and so coming back to the Slade I had no sense of what it was going to be like. But then so many people didn’t show up that I got this massive studio space – it was like having a really shi-shi residency. I was alone in a six-person studio, and so I was just doing massive work and having lots of jacket potatoes for lunch. It was delicious!

How did you find finishing your degree in lockdown? How did it affect your work process?

Over lockdown, I was painting in my shed quite a bit. I was making smaller scale paintings exploring boundaries and liminality. I’d explored space before, but over this period it became more about claustrophobia, about looking through windows and the domestic space, the kitchen table as the horizon – that sort of vibe. In November, I applied for the SIM residency in Reykjavik , and ended up going to Iceland for a month in January. That took me out of the domestic, into landscape, which is something that I hadn’t really been playing with. In my year out it was like space closed and then opened again to the extremes.

So through lockdown you’ve had a push and pull of space – you’ve been pushed into the extreme closure, and then also exposed to immense landscapes! I know a lot of your work is mixed media – did you stick primarily with painting over lockdown?

The weird thing is, because I was meant to be graduating in 2020, I got a few shows as a ‘graduate’. One was the London Grads NOW at Saatchi, and another was with Georgia Stephenson who does Patio Project. She got some funding which meant I was able to make a sculptural work that went on her patio – the ‘patio as a plinth’. That was the first time I’d made outdoor sculpture. I started using concrete, rustoleum and ping pong balls. So, I was exploring sculptural work as well as painting. For the degree show, I worked with a trans inclusive womxn’s choir called ‘Lips’, and then that fed into a sort of sound piece.

Your work is so symbolic – ‘teeth, tits, boots and lips’! The choir ‘Lips’ fits into that so well. How have all of those iconographic references fed into your practice?

I was interested in the body before Slade. Pre-lockdown, I was making this four-metre-tall breast that you could go inside, like a temple or chapel, with painted walls – It was essentially one big tit. But I felt like that was too obviously bodily. And so, I then began thinking about the boot as something you can wear, as something that referenced the body, and has associations with vaginas. An ‘old boot’ is ‘urban dictionary’ slang for a used up, old vagina. And then there are all the associations of boots as something kinky, whilst simultaneously aggressive and military. I was recasting the boot as a vagina. I then found out about the vagina dentata through reading Barbara Creed’s The Monstrous Feminine (1993) which talked about things such as tooth vaginas in horror films. I remember thinking, ‘Oh, this is amazing! My boots will have lips and teeth!’ And then I thought: ‘what’s the clitoris? It’s an eyeball’. There was quite a lot of visual symbolism that had been living in the frescoed walls of my big tit temples, and suddenly they merged to create this creature: the vagina dentata booty with clitoris eyeballs. And there are loads of them, and they’re all mates.

Who would you say are your artistic references?

Loads of references, so many references! I love Monster Chetwynd, Tai Shani, and people like Lindsey Mendick. Yayoi Kusama, Leonora Carrington and Dorothea Tanning are great also. I’m especially influenced by artists working with the body, with different notions and levels of feminism, or at least with the female voice.

Your works are very theatrical, fluorescent, and camp. How did you come to work in this palette? From what I’ve seen of your work, I’ve assumed vibrancy from a young age.

For sure. I grew up with theatrical parents, and when I was small, I was left in the dressing rooms with my mum and the wig ladies, so there have always been camp shenanigans in my life. I did my BA at City and Guilds where I was doing lots of neon under painting, even though in many ways it was a mega-trad school. It’s always been about the carnivalesque, about theatricality and humour, but also thinking about political potential and the license of the fool. I had an alter ego called Bella Lordwarf, who for about five years was gigging in queer cabarets.

Talk more about her! How did she come about?

Jesus, it’s a long story! When I graduated from City and Guilds, I was making fake museums that told the stories of fictional circus families. I did a museum piece installation at Jacksons Lane, and I needed someone to be the expert voice of everything, and so I made this anagram of my name, Bella Lordwalf, to humanise this narrator. She became a historian or academic who knew about my fictional worlds and translated them. I then thought I could use this fictional character further, to do naff paintings and other performances. Bella Lordwalf was then suddenly doing music videos, she had a girl band, she performed in Lisbon, Oxfordshire, Birmingham and her videos were screened at festivals in Korea, New York and Oznabruck! An international audience grew through her films.  That was great, because it meant I didn’t have to send a bloody painting on a ship, I could showcase my films online.  When I got to the Slade, I realised I needed to be able to be myself without a mask; although that mask gave me the power to be an idiot, it’s more powerful to take the mask off and be yourself – or maybe not yourself but at least explore a more authentic voice.

When I went back to Slade, I was strategic. I saw that the rotunda had loads of crappy bits of wood inside it and asked if I could use the space for my degree portfolio. I then went ahead and made something specifically with that bit of architecture in mind, thinking about frescoes and temples and spiritual spaces, and wanting it to be a space that invited people in to interact. I simply used the rotunda as a starting point, and then made work for it. When it came to allocating spaces, I pleaded my case and they gave me the round room.

You’re also involved in BAD ART, which recently exhibited HOT AIR – can you talk more about that?

BAD ART is amazing – Anna Choutova invited me to be a part of it a few years ago, and when she came to the Slade we became friends. I am now the co-director. HOT AIR has been in the works for the last two years but, because of the lockdown, everything kept shifting around. In fact, it was originally meant to be in Berlin! There are more exciting things emerging from BAD ART that are super exciting.

What are your thoughts going forward? Any techniques you’re keen to explore, or initiatives you are getting involved with?

I’ll keep being involved with the BAD ART team – they are amazing. I’m also going to Cyprus for a residency in August with the Cyprus College of Art, which will be lush. There are a couple of other ‘Sladies’ going – so we’re going to explore the light and do paintings (but probably swim and drink lots of wine as well). So that is the immediate. There are lots of curatorial projects and other exciting things that are bubbling away that haven’t come to absolute fruition.

Final question: what would be your dream project, location and subject. Perhaps a space you would want to dominate with inflatables and vagina boots? Talk to me.

It would have to be an enormous space: covered in paintings floor to ceiling, complete with singing vaginas, projections, and a limitless budget! The space would be something with a big dome. Or even a lighthouse – that would be amazing because that’s like a massive cock. Fun. I’d love to do more international stuff, explore the Berlin scene in particular. I want it all and I want it now – but first I’ve got to go have a nap.

Featured image: Flora with Join US installation in the Round Room, 2021. Image courtesy of Flora Bradwell.