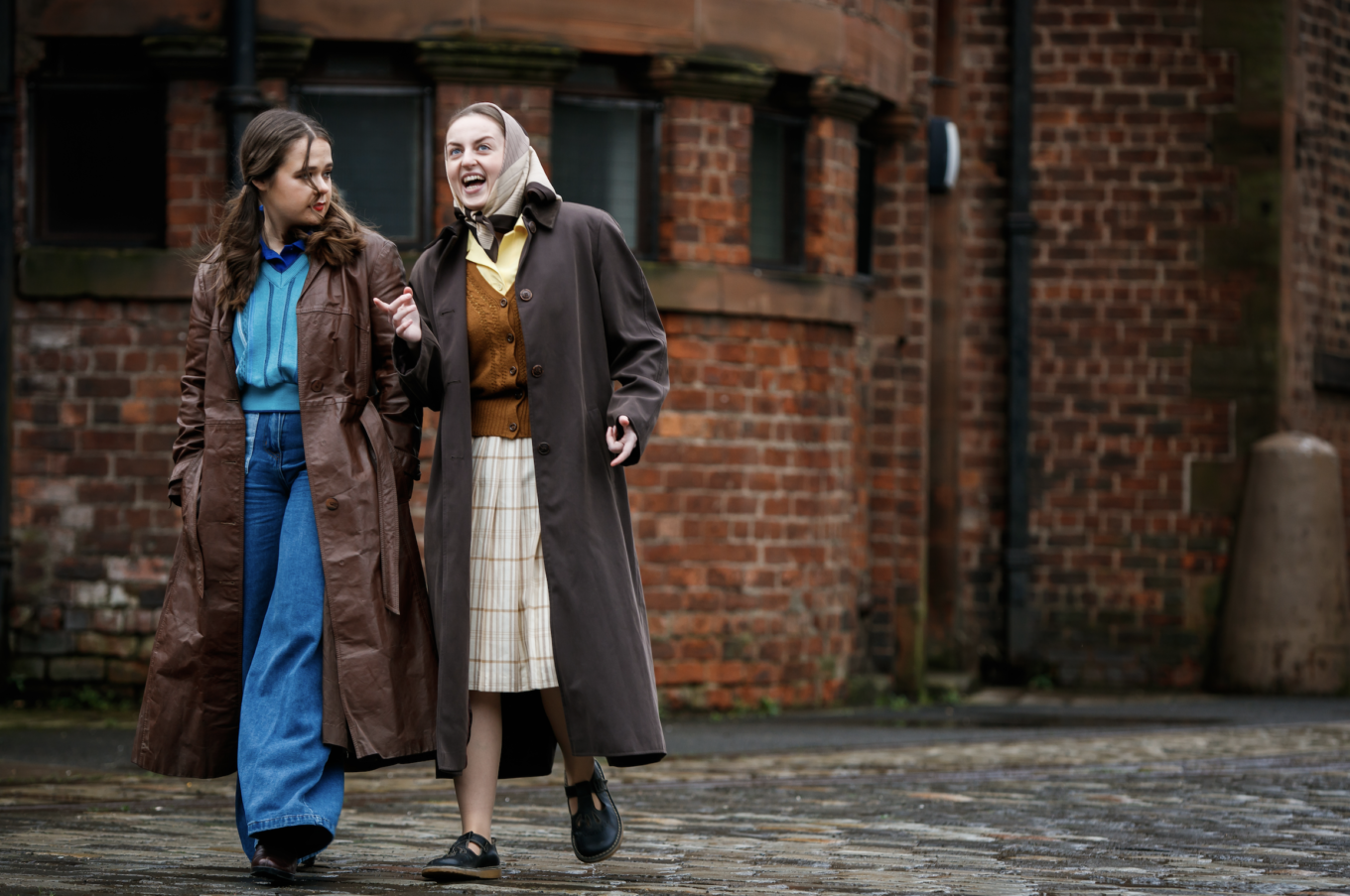 The year is 1971. Ted Heath’s Conservative government is in charge and unwilling to invest in ‘lame-duck’ industries, putting thousands of jobs on the line, including all those working at the Glasgow and Clydebank shipyards. For the Upper Clyde Shipbuilders (UCS), there was only one option: a work-in campaign at the company’s shipyards to save their jobs and livelihoods.

Yes! Yes! UCS! is a story of two women, Aggie McGraw (Janie Thomson) and Geraldine ‘Eddy’ Edison (Heather Gourdie). The pair work in the shipyards, becoming embroiled in the fight to save their industry. The story is one of female empowerment and alliance, a distinctly refreshing departure from the traditional history of trade union activism, whereby industrial action in the manual workplace is primarily told as a man’s story with supportive wives at the sidelines, if featured at all. The two women protesting for their jobs have widely contrasting personalities, and thus seem an unlikely friendship. This ensures each protagonist has much to learn from the other.

Comedic moments are not in short supply, especially from Thomson’s Aggie, a charming and relatable character. Aggie frequently broke the fourth wall both cleverly and wittily, without overdoing this trope, reminding the audience that these were real issues experienced by thousands of people not so far back in our nation’s history. Aggie’s character develops substantially over the course of two hours. At the onset of the play, she is fairly gormless and dowdy, simply pleased to have found employment anywhere. However, when talking to a group of female workers at the Tate and Lyle factory in Liverpool, Aggie gives an impassioned and rousing speech explaining what she has learnt from her experience: above all, that everything is political. The play weaves social and political history together by using clips and audio footage of Ted Heath in Parliament to demonstrate how decisions made by men in power trickle down to significantly alter the lives of workers that have not been paid a second thought.

Gourdie enters the stage as Eddy with a dramatic pose, introducing her character’s self-assurance. A subtle wink humanises and softens her immediately, however. Clothing represents the two characters’ differences. Eddy is dressed in stylish 1970s attire that would not feel out of place today, compared to Aggie’s bleaker, more modest appearance. Gourdie’s Eddy has an effortlessly fearless outer-shell, but as the play digs deeper into her character, the show is provided with its more solemn moments, exploring ideas around unfulfilled dreams and living up to parents’ expectations. Eddy dreams of going to art school, her job in the shipyard a means to an end. But, as the play progresses, we see how her involvement in the industrial action ultimately gives her the confidence to realise her potential. Her fathers’ worsening condition is a theme of the play that ultimately comes to a head in a powerful monologue, delivered to a portrait of him she created. Reflecting on childhood dreams, expectations and family life, Gourdie’s emotional range is honest and palpable, and brought a tear to many an eye in the audience.

As Gourdie has pointed out in an interview, the show is more a ‘play with music’ than a traditional ‘musical’; the music drives the emotion and sets the scene in the heart of Scotland from the outset. Mixing traditional industrial songs from the 1970s, such as Alex Harvey’s ‘Hammer Song’, along with original tracks heavily influenced by 1970s rock, written by playwright Neil Gore, the actresses’ talents are showcased in full glory. The pair not only tell their characters’ story, but sing and play their own instruments, Thomson playing guitar and drums, and Gourdie the keyboard, the cello and the violin. The actresses perform together in harmony, symbolising their characters working together too.

Written to celebrate fifty years since the Clydebank Work-in, this play follows a succession of work by Neil Gore that brings attention to the contributions of people in social history whose lives are overlooked or forgotten. As the play ended, an audience member asked if the 1984-5 miners’ strike would receive the same theatrical treatment by Gore when it reaches its own fifty year anniversary. ‘Maybe,’ Gourdie speculated, but commented that it would not have quite the same uplifting ending. Yes! Yes! UCS! ends on an optimistic note: the shipyard was saved, albeit temporarily, and Aggie becomes a shop steward just like the many men she had previously seen across the industry, not realising that one day she could too. Participating in industrial action gave these characters a voice, and now through this performance, the women of 1970s Clydebank have been given one too.

Yes! Yes! UCS! is touring the country until 1st May, and will return to London’s Sands Film Studios on 20th April. Find more information here.