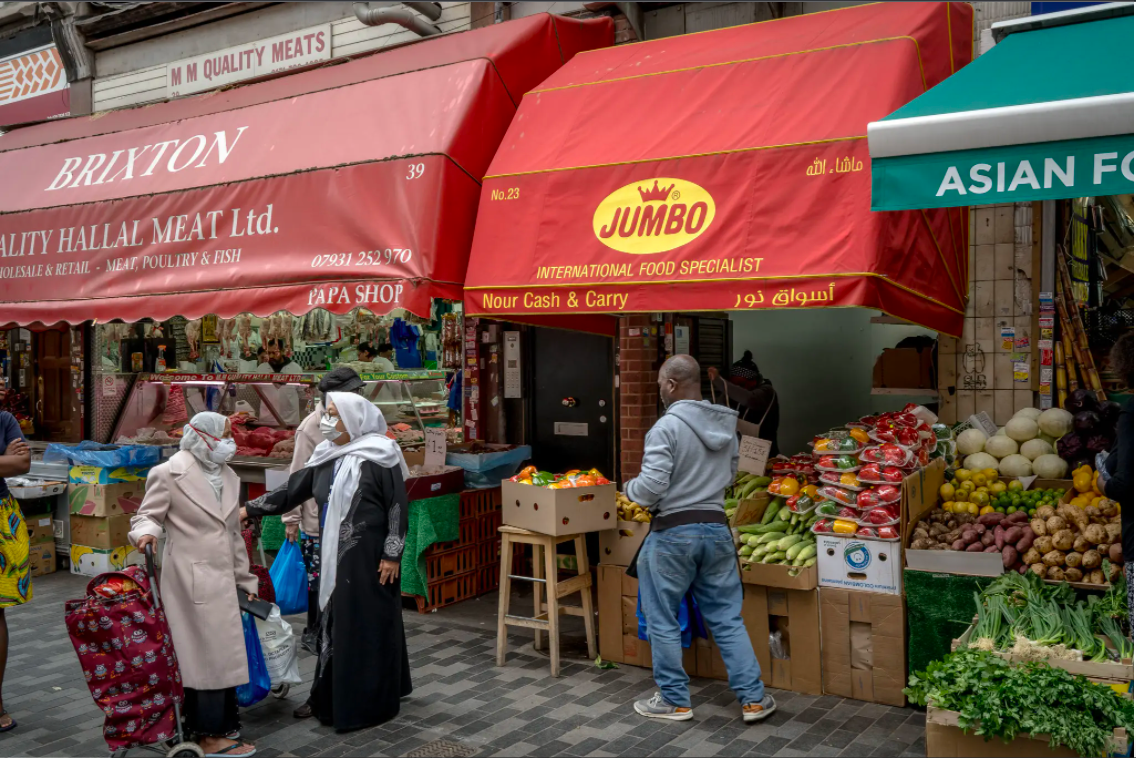 DISHA TAKLE considers the impact of gentrification on Brixton’s working-class and ethnic communities, in light of the attempted eviction of a local grocery store by an American developer and the ensuing community protests.

The sound of Afrobeats and Reggae music booms through large speakers on the vivid streets of Brixton – a place that is bright, chaotic and colourful, even on the greyest of London days. The lively reggae turns into subdued, elevator-esque music as you enter Brixton Village – an area with neatly planned artisanal cafés, boutique stores, a champagne-and-cheese place and a nearby mural of Brixton-born David Bowie: all places for Brixton’s weekend visitors to decorate corners of their Instagram feeds with. It only takes a four-minute walk across the street for this curated facade to wear out. Murals of fresh fruit, musical instruments and people dancing are plastered all over the neighbourhood walls and store shutters. Next to crowded fish-mongers and off-licences, Brixton’s ethnic residents are queuing impatiently, as they buy their weekly groceries.

Nour Cash and Carry is one of these stores. With an eclectic inventory of multicultural foods, Nour has served Brixton’s ethnic residents for the past two decades. It is a place of confusing, crowded mayhem on its busiest days, where shoppers sometimes elbow each other out for the last bag of rice. The shopping experience is unlike your regular Tesco trip.

‘It isn’t a fancy shop, it is for the community and we’ve built it organically’, says the owner, Saja Shaheen.

The aisles in Nour are narrow and the shelves overflow with exotic ingredients like yam, egusi, dates and za’atar. A local blogger calls it a ‘retail Tardis in Market Row with everyday and out of the ordinary pantry fodder’. The store caters for its many African, Jamaican and Middle-Eastern shoppers, as well as selling niche ingredients like barberries and rose harissa, for those trying to follow a recipe out of an Ottolenghi cookbook.

In the last twenty years or so, Nour has integrated into the fabric of Brixton’s community, and has a very loyal customer base. Some locals say that they have been going to the store since they were children. ‘This shop is our blessing! We get all our Jamaican products here – yam, cassava, crayfish and Maggi!’ remarks one customer. ‘My grandparents shopped here. My mother shopped here. My aunty and uncle shop here. It’s been here since forever!’, adds Yana, a shopper in her teens.

That is why it came as such a shock to the Shaheen family (who run Nour), its shoppers and the Brixton community at large when Nour Cash and Carry was served with an eviction notice in January 2020. Their landlord, a Texan multi-millionaire named Taylor McWilliams, intended to build a new power station where the store resided, to provide electricity for shops in and around Brixton Village. The plan was to vacate Nour by 22nd July.  Unfortunately, this happened during a global pandemic, when the store was already suffering from declining sales due to restrictions and no government protection from rent-related evictions, leaving the Shaheen family in a state of crisis.

‘My heart sunk when I found out,’ recalls Saja. When negotiations with Hondo Enterprises struck out, members of the community came together to protest against this wrongful closure. Brixton’s African-Caribbean community was frustrated with large, faceless gentrifiers shutting their community stores, and they were going to push back. The ‘Save Nour’ campaign was born. The battleground was Nour and the fight was against gentrification.

Brixton has long been a haven for immigrants arriving in  London. It was the low rents and tolerant community that attracted its first influx of African-Caribbean immigrants in 1948. Since this Windrush generation, the area has welcomed settlers, like the Shaheen family, with open arms. It was also long-neglected and suffered from poor infrastructure, low unemployment and high rates of crime, which set the scene for the 1980s Brixton riots.

When investors planned to redevelop the area, it was met with enthusiasm, excitement, and hopes for a new Brixton. Yet the neighbourhood and its members were largely ignored by the City Government. What was once called the ‘24-hour-drug supermarket’ quickly reinvented itself as a ‘food hub’ and Brixton Village slowly became one of London’s hotspots, with fashionable restaurants and vegan cafés –  attracting young, white city-workers looking for some flavour for their cheese. Over the last decade or so, Brixton residents have noticed that the pace of this change has accelerated. As Brixton’s popularity rose, so too did rent prices and the cost of living. Stores were driven out, residents were displaced, and what was once a curious amalgamation of vivid chaos and colour has now become a tame pastel background for ‘yuppies’.

Over the last two or three years, Brixtonians have been vocal about their discontentment with gentrification. Protests have been organised online and offline, as local artists express themselves through documentaries, art installations and street graffiti. The sign ‘Yuppies Out’ outside the office of the upmarket real estate developer Foxtons is just another testament to the residents’ growing frustrations with Brixton’s changing landscape.

‘This isn’t our Brixton. We’re being driven away,’ says Mack, a Brixton local, as he shows me Taylor McWilliams’ latest plans to build a twenty-storey office building in the middle of the area, called the ‘Taylor Tower’. McWilliams and his company Hondo Enterprises took ownership of Brixton Village in 2018, and have since made many alterations. He plans to rejuvenate Brixton, describing his love for the area’s music and culture. He has already spent over £2 million fixing Brixton Village’s infrastructural issues, such as improving plumbing, and cancelled rent during the first three months of the pandemic. He sees himself as someone invested in the community, which is why he wanted to build a power station where Nour was – to ensure a secure power supply to all the stores.

‘I don’t know why I am being cast as the villain here. Cancel culture is crazy. I only want to help’, he says in a New York Times article, talking about the protests to keep Nour Cash and Carry. Some locals also see this gentrification as regeneration. Arnold, an owner of a nearby restaurant says, ‘some people have a false sense of nostalgia. These investors are improving what was once an ignored, downtrodden and crime-infested area!’.

Yet many gathered to protest against Nour’s closure, forming the Save Nour campaign. ‘If they could do it to Nour, they could do it to anyone. The message was clear,’ remarks Hiba Ahmad, the brains behind the campaign. She goes on, ‘Hondo says that their intentions are only to help the community of Brixton but that’s simply not true. Brixton has been gentrified by white yuppies, and Hondo is taking our spaces, raising our rents to make us leave.’

The campaign’s website provides further details into Hondo’s actions, and how they disregard  the concerns and objections of Brixton locals. To bring more attention to their campaign, protestors infiltrated McWilliams’s DJ Collective Housekeeping’s online performance with signs such as ‘You Party While Your Tenants Suffer’. This stunt helped gain the campaign a lot of traction and coverage from news and media channels, including Vice, Vox and the New York Times. It worked, and soon many other news and blog sites were covering Nour’s campaign. Over 50,000 petitions were signed and local celebrities, such as chef Yottam Ottolenghi, voiced their support. Nour’s dubious fate was on everyone’s minds. For some, this was reminiscent of the closure of the nearby A&C Deli in 2015, whose owners were faced with the same story – rising rents and council indifference. Everyone was hoping that history wouldn’t repeat itself.

Increasing rents have driven out many local stores in Brixton, to the point where many deli-owners and butchers say that they are just hoping to get by. ‘Brixton’s changing visually’, they note. ‘We don’t know how long we fit in this image.’ According to Alessio Kolioulis, a UCL Professor of Urban Planning, this visual, gentrifying change in Brixton is a common practice in urban planning called ‘city branding’: ‘they consider this area as a product and try to make it visually appealing to their consumer base. It commodifies areas like Brixton and brings about investment, higher sales and an insurgence of middle-class people. In this bargain, Brixton’s predominantly working-class and ethnic community is segregated and left behind.’

After months and months of campaigning and multiple negotiations later, a deal was reached on 29th June  2020. The Shaheen family were to keep their store until they were moved to another location in the market, with cheaper rents. Campaigners and locals were celebrating, congratulating the family on their win against the faceless gentrifiers. ‘I feel relieved’, says Ms Shaheen, as she hugs her father, Saalam.

Nour Cash and Carry is a pillar of Brixton’s community. ‘Do you think Tesco or Aldi is going to have my crayfish or eight different flavours of jerk sauce?’, chuckles Ife, a forty-something Jamaican lady and one of Nour’s loyal customers. ‘This is where we go to get food from home’, says another.

After the campaign’s success in preventing Nour’s eviction, locals are more optimistic about making their voices heard. ‘We are tired of being forced out of here and we will make Lambeth Council listen,’ says another campaigner. Now, the Save Nour campaign has its eyes set on an even bigger goal: boycotting the Taylor Tower, which is now being lobbied as ‘creat[ing] more jobs for the community’. Brixtonians are undivided and determined on this issue, believing that it will only add to Brixton’s gentrification problem. ‘No one wants this tower here. The jobs they will create will be filled by some city workers. This isn’t for the community. It’s for profit,’ says the Save Nour website, with the call to action ‘#FightTheTower’.

For Nour itself and the Shaheen family, it’s business as usual. They want to move on from this debacle, continue to do their jobs and keep serving the community. Ms Shaheen believes that Nour will adapt to Brixton’s evolving identity and embrace the change as much as it can. ‘This means a lot to my family. It really validates our identity in this country’, she says in a New York Times interview.

As Brixton’s identity shifts in ebbs and flows, the fight for gentrification shapes its future. Between discussions of community versus profit, and preservation versus regeneration, a new Brixton will, hopefully, emerge – unique, vocal and resilient.