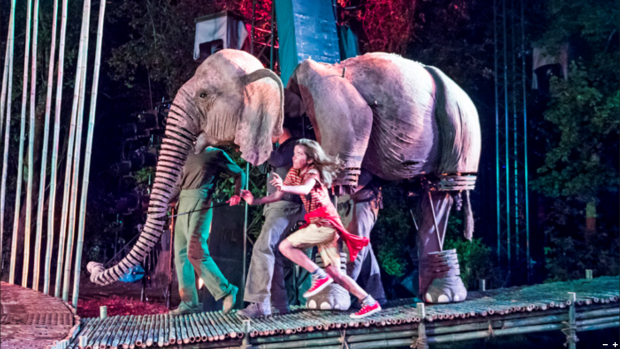 NW1 4NU – a fifteen minute stroll from the buzzing restaurants of Fitzrovia, Euston Hospital and the BT Tower, and yet not the roar of an engine or the howl of a siren to be heard. Encompassed by towering trees in the heart of Regent’s park, the Open Air Theatre transports city-dwellers to the jungles of Indonesia. A theatrical adaptation of the book by Michael Morpurgo, ‘Running Wild’ is an extravaganza of puppetry.

Children and adults alike gasp as Lilly (Ava Potter) emerges from the trees mounting an enormous elephant. This beautiful puppet was designed by former War Horse Puppetry Directors Finn Caldwell and Toby Olié. The movement and sound of four performers create a captivatingly realistic representation of an elephant, from its cumbersome footsteps to its billowing ears. The presence of the puppeteers does not destroy the illusion; Laura Cubitt emulates the fluid movements of an elephant’s trunk with her entire body, becoming an extension of the trunk rather than an external machinist.

With stunning puppets, a backdrop of mountainous foliage and a sunset dappled stage, the set requires little embellishment. Different locations are created by an ensemble cast, the largest ever to appear at the Open Air Theatre. The ensemble perform in their entirety only a few times to emphasise key moments. Their presence is particularly powerful when they symbolise the tsunami that hit Sumatra’s east coast in 2004; the ensemble use slow, smooth choral movement and soft chanting, before descending into chaotic, disparate movements and dissonant harmony.

At the heart of this fantastical adventure is an ordinary ten year old, fanatical about football and fascinated with stories. Following the death of her father, Lilly reminisces about the stories he used to read to her, particularly Rudyard Kipling’s tale of how the elephant got its trunk. Lilly and her mother travel to Indonesia to see some real elephants but, soon after arrival, her mother is swept into the arms of a tsunami. We travel with Lilly on her journey through a wilderness of pain and loneliness to the formation of her new family, as she befriends an elephant called Oona and helps a family of captured orangutans. Potter is funny and endearing, the audience fall in love with Lilly from her first chant of ‘Glory, glory Man United!’ As part of the ensemble, Lilly’s father champions her throughout, in times of need cheering from the crowd, ‘Where there’s a Lil’ there’s a way!’ Spurred on by his support, Lilly shows the audience that if you are determined you can achieve anything. She is a role model to children and adults; she graces bereavement with strength and kindness, and courageously defends her beliefs even while in the claws of poachers.

Beneath its stunning visual effects, Running Wild carries a serious message about the detrimental effects of human activity upon endangered species. It would be easy to think this topic is too complicated for children, yet it is vital that we understand from a young age the importance of protecting the environment. Poaching for the illegal wildlife trade threatens animals across Asia, particularly the endangered Sumatran tiger and orangutan. Running Wild teaches children to value animals as friends, causing them to resent the poachers who attack their beloved Oona and the playful orangutans.

The poachers eventually reveal that their main objective is the obtainment of palm oil. This is a highly lucrative commodity due to its presence (to Lilly’s horror) in the majority of supermarket goods, from bread and chocolate to detergents and cosmetics. Deforestation occurs to make way for palm oil plantations which cannot support the same levels of biodiversity maintained by forest ecosystems. Running Wild exposes children to the devastating consequences of deforestation, to ensure that such practices are condemned in the future.

Living in London, the closest you come to a herd of elephants is taking the central line at 6pm; it is easy to forget about environmental destruction occurring on the other side of the world. But as the sun set on the Indonesian paradise, this story of friendship between a girl and an elephant reminded me of the barbarity of the palm oil trade, and I know next time I buy a loaf of bread, I’ll be sure to check the label.

‘Running Wild’ is showing at the Open Air Theatre in Regent’s Park until the 12th June. For tickets and more information click here: http://openairtheatre.com/production/running-wild.