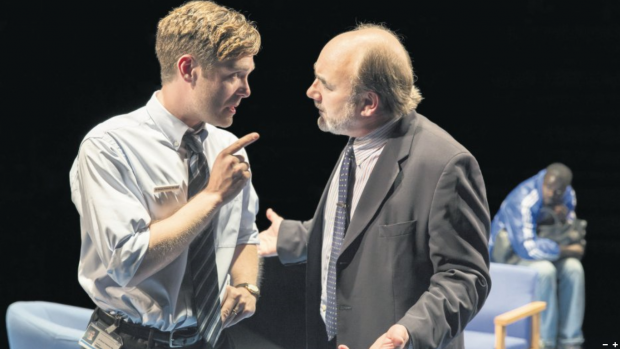 Joe Penhall’s Blue/Orange is a play primarily about abuse – abuse of power, abuse of political correctness, abuse of a system. Sixteen years on from it’s star-studded debut, it remains stunningly relevant; set on a psychiatric ward, senior consultant and the play’s bureaucratic figurehead, Robert, wants rid of a mentally ill patient owing to a lack of hospital beds.

Matthew Xia’s revival of the play nods towards and gently satirises government cuts to the NHS, a matter the play couldn’t have touched upon originally. In this production, Xia assails the audience’s senses before the play has even begun – our tickets are checked on the door and we are directed through a sparse blue consulting room, littered with NHS style blue leatherette chairs, with a table of peeled oranges in the very centre. The smell of citrus and disinfectant lingers with us until we reach our chairs, which look onto a direct replica of the room we have just passed through. Not only are we introduced to a world that is inhumane and clinical, but one in which scenarios are unavoidably and disconcertingly repeated.

The play follows Robert (David Haig), senior consultant psychiatrist on the ward, junior psychiatrist Bruce (Luke Norris) and their patient, Christopher (Daniel Kaluuya). The psychiatrists are white; the patient is black. The discussion in the play centres around Christopher’s release; Bruce wants him to stay sectioned and appears truly concerned with his welfare, but Robert wants to get him out and is so determined to do so that he eventually suggests Bruce is motivated by racial prejudice.

Kaluuya’s exceptional performance is of a character who is clearly mentally ill – initially his Christopher is always on the edge, moves around the stage manically and has an electric energy. As the play progresses he is replaced with a duller, more subdued and depressive character but with such precision we cannot tell at which exact moment this change takes place – he is always at odds with himself. The minimalist consulting room is raised, and when the consultants ask him to leave the room he drops into the surrounding pit and paces, like a caged animal, his energy pervading even the scenes in which he is not present. This is highlighted further by the sound – there is constant white noise, it is very unnerving.

The blatancy of Christopher’s mental instability makes the conflict between consultants even more unsettling. Haig is humorous to the point of farcical, excellent and patronising to the extreme – politically ‘acting’ a role of compassion for the vulnerable, whilst brazenly doing the reverse. Bruce is a direct opposite, seeming heartless to Christopher’s face but caring deeply about his welfare. As Bruce, Norris does well to match the energy of the other two actors; his character is arguably the least interesting, but his portrayal is very strong. Their conflict boils down to whether or not it matters if Christopher thinks oranges are blue – or whether Idi Amin is his father – or another number of things which seem either trivial or ridiculous.

Despite the play’s title, the conflict between colours that actually drives the play’s main action is that between the characters’ skins, and their respective mindsets. Robert thinks – or feigns to think – that a lack of understanding between races leads to the sectioning of more black people than white as mentally ill. The fact is, Christopher is from Shepherd’s Bush. Phrases are repeated throughout the play, twisting the audience up in maddening arguments about semantics: ‘where he’s from’, ‘people like you’ etc. until the end – two and a half hours later.

Like Christopher, the audience leaves as bewildered as they were upon entry. It is maddeningly good.

‘Blue/Orange’ is showing at The Young Vic until 2nd July. For tickets and more information, click here: http://www.youngvic.org/whats-on/blue-orange