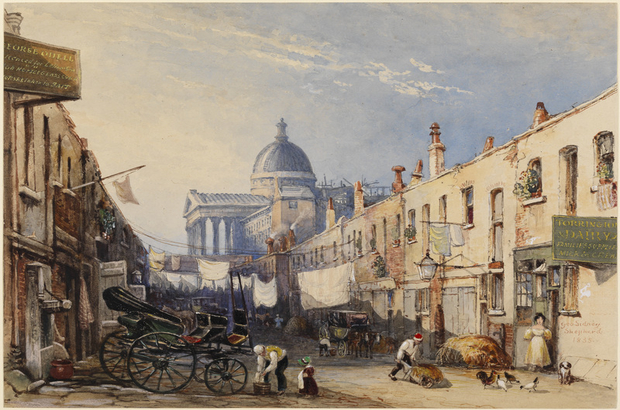 For those of us who live and work in Bloomsbury, it is all too easy to pass through its famous squares without giving thought to the astonishing history which lies behind each one. As part of Between the Lines, a pop-up literature hub within this year’s Bloomsbury Festival, I was fortunate enough to attend a talk by Professor Rosemary Ashton, entitled ‘Russell Square in Life and Literature’.  It elucidated the social and cultural significance of this particular square, as a representative of the Bloomsbury quarter as a whole. Professor Ashton is Emeritus Quain Professor of English Language and Literature, an Honorary Fellow of UCL, and will be familiar to many due to her frequent contributions to Radio 4’s ‘In Our Time’. Ashton was also the Principal Investigator on UCL’s Bloomsbury Project, a detailed study of the growth of the area from 1800 to 1900.

The largest garden square in London, development began on Russell Square in 1800. In contrast to the fashionable shops of the West End and the financial district of the City, Londoners of this time had no incentive to visit Bloomsbury. Even the British Museum, then located at Montagu House on Great Russell Street, failed to attract visitors due to its limited opening hours and strict entry requirements.

John Wilson Croker MP quipped in a House of Commons debate in 1825, that he ‘did not profess to know exactly where Russell-square was’. This became a long-running joke with a significant impact on perceptions of the quarter. Ashton’s lecture explored such reactions in literature, including cartoons, newspapers and novels. One response came from the Bloomsbury native Benjamin Disraeli in his book Vivien Grey (1826). Two characters are invited to an event ‘somewhere, as Theodore Hook or Mr Croker would say, ‘between Mesopotamia and Russell Square’.’ The perception of Russell Square as a cultural wasteland is representative of the Victorian attitude towards many areas of London which we would now consider ‘central’. In 1860 it was Kensington which was considered too remote to house a major museum–in this case one dedicated to natural history.

The most famous literary work depicting Russell Square discussed in the talk was W. M. Thackeray’s Vanity Fair. Serialised in 1847-8, the novel follows the lives of two resident families in the 1810s. Thackeray, who once lived on Great Coram Street, a road of houses dwarfed by the mansions of Russell Square to the east, describes how ‘Coram Street trembled and looked up to Russell Square indeed.’ Vanity Fair portrays the comfortable lifestyles enjoyed by the upwardly mobile inhabitants of this newly developed area, but also explores its relative unfashionability compared with established West End locations such as Berkeley and Hanover Squares. Thackeray’s depiction of Russell Square as a location of middle-class sensibility provided Professor Ashton with an opportunity to discuss the Bedford Estate, which covered a large area of Bloomsbury. The Duke of Bedford attempted to maintain the respectability of the area by tight regulation of land leases and by charging high rents. Advertisements, shops and pubs were all discouraged. Even the newly-formed UCL was not permitted to promote itself: there are archived letters from Bedford repeatedly asking the university to remove a brass plaque outside its entrance.  Too socially remote or the aristocracy, yet financially unattainable for most working people, Russell Square became evocative of middle-class respectability.

‘Russell Square in Life and Literature’ emphasised the extent of the development of Bloomsbury’s famous squares and institutions, and its reputation within London society and beyond.  In her book, Victorian Bloomsbury, Professor Ashton states that, ‘it was in the nineteenth century that the region of London known as Bloomsbury acquired its distinctive, important, and above all progressive role in the life of both London and the nation’. By the end of the Victorian age this rapid evolution resulted in a sense of intellectual freedom great enough to attract the writers, artists and philosophers who would become the area’s most famous residents: the Bloomsbury Group.

As the predominantly residential suburb of Bloomsbury developed into a centre for academic and professional institutions, the nature of the square’s residents also changed. By 1900, the suburban merchants and businessmen of Thackeray’s novel had been replaced by professionals connected to UCL and its affiliated hospital, as well as upper middle class intellectuals. The Duke of Bedford’s attempts to retain the ‘genteel’ character of the area through the deliberate preservation of large and luxurious residences, at the expense of affordable housing and commercial enterprises, seem as pertinent now as ever before as re-development of Russell Square enters a new phase. Today, exponential rent increases all over London are ensuring that the capital increasingly becomes affordable to only a small sector of society. In Bloomsbury in particular, property prices are so great that many of the houses which once lined its iconic squares have been transformed into luxury offices. The growth of the ‘Cut the Rent’ movement at UCL highlights the fact that many students simply cannot afford to live there. Despite the passing of more than a century, it seems that the sensibility of Victorian Bloomsbury is still very much alive, to the detriment of some of its contemporary residents. In this context, Ashton’s insights take on a troubling new significance, reminding us of the importance of Bloomsbury’s past as we look to its future. In order to maintain Bloomsbury’s status as a home for learning and progress, we must ensure that this wonderful area remains accessible to all who wish to study and work within it.