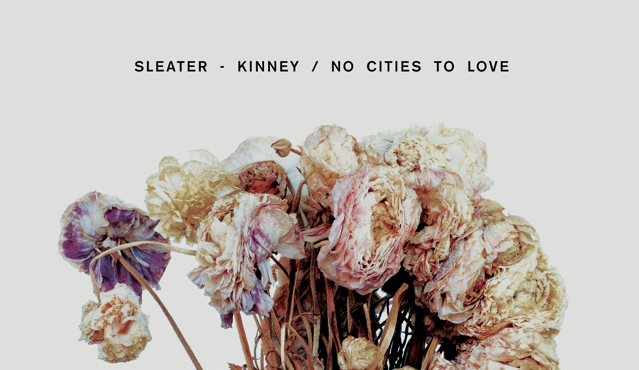 AMY GWINNETT has something to say about No Cities To Love.

(Warning: The reviewer finds it near impossible to write objectively about Sleater-Kinney because in her opinion they are the queens of everything and she worships the ground they walk on.)

“No outline will ever hold us” goes Sleater-Kinney’s ‘A New Wave’ and when has it ever? Trail blazers in the 90’s America Riot Grrrl scene, Sleater-Kinney are back with No Cities to Love, their first album since 2005 (my daily sacrifices at the altar of punk rock must have finally paid off). This fact alone suggests it’s going to be a propulsive, vital thing; none of the members see the band as a day job, their lives are chock full of everything from side projects to TV shows (Brownstein’s excellent Portlandia) so you can be sure if they’re making an album, it’s because they have something to say.

This certainly seems the case on opening number ‘Price Tag’, which is to its Jessie J namesake what the sun is to the world’s weakest candle. Though the angular, new wave inspired guitars and Carrie Brownstein and Corin Tucker’s signature yelps are firmly in attendance it’s also incredibly accessible. Sleater-Kinney have never been exactly a difficult band, but some work has been known to be required to fully embrace some of their artier moments. On No Cities to Love however, it’s like the doors have been thrown wide open; the kingdom of right-on-left-wing-feminist-punk is now open to casuals. This is no bad thing – once you’re in you’re in with Sleater-Kinney and this album is bound to win them a new generation of fans.

Highlights include title track ‘No Cities to Love’ which boasts a chorus more catching than scabies and some seriously top notch drumming, and continues the band’s preoccupation with urban living. First single ‘Bury Our Friends’ is a punchy meditation on the idea of self under the lens of press scrutiny, and has indie disco floor-filler written all over it. ‘Gimme Love’ is the album’s most experimental song, but nevertheless has the sound of an anthem in waiting, even if it does make for a nervy, jarring listen. There’s a hint of queasiness that permeates the entire album, the fear of the modern malaise, the grind of the day to day. It doesn’t go unchallenged though, the cries of “We win, we lose, only together, till we break the rules!” create a fist pumping moment of – yes I’m going to say it – girl power (or rather grrrl power) that breaks through the anxiety like a slap to the face.

The entire album is smart, timely and completely necessary. The fourth wave of feminism is riding high and Sleater-Kinney are just the angry and intelligent voice it needs for the perfect soundtrack. No Cities to Love stands proudly as a highlight in a career full of them.