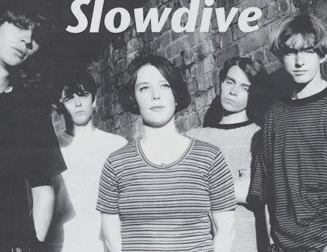 ANJELICA BARBE reviews ‘Slowdive’ playing at the Forum during their acclaimed reunion tour.

Alongside My Bloody Valentine and Ride, Slowdive are pioneers of the shoegaze genre. This genre – characterised by reverb-heavy guitar riffs, undulating bass lines and dreamy vocals – proved most popular in the early 90s, but it has experienced a recent revival with bands like DIIV, Deerhunter and The Radio Dept.. 10 years after they were dropped by independent label Creation Records in 1994, a reunited Slowdive reminds us why they were at the forefront of this movement in a 20-date tour.

Slowdive’s final few dates took place at The Forum in Kentish Town on the 19th and 20th December 2014. Support was provided in the form of Norwegian ambient duo Deaf Center on the first date and psychedelic-rock band Hookworms on the second. My sister and I had keenly bought tickets for the 19th. We found ourselves amongst a mixed demographic – both balding North Face-clad Dad types and younger Tumblr hipsters were in attendance. Too late to catch the support band, we nestled ourselves at the front of a raised platform, dead centre to the stage.

Entering the stage under a muted blue wash to Bryan Eno’s ‘Deep Blue Day’ (co-producer of their second album Souvlaki), Slowdive readied themselves for their first song. They opened with their eponymous single from the debut studio album Just For A Day. Although I had yet to be born when this record was released, Slowdive lucidly recreated their signature sound; weaving crunchy, effect-laden guitar with Rachel Goswell’s delicate and ethereal vocals. Drummer Simon Scott provided a heavier percussive backbeat than I expected for their live show, and lead vocalist Neil Halstead’s riffs on ‘Avalyn I’, built to fill the venue to an almost stifling extent, punctuating each song with a pedalboard push.

As much as I commend the musicians, equal praise must be given to the concert’s lighting and set design. During the set, blinding strobe lights flashed while tiled screens showed graphics of psychedelic swirls and optical illusions, most effectively complimenting the trance-like track ‘Crazy for You’. Grainy black and white footage of the band’s live image was frequently screened, and there was a welcome absence of camera-phone recording. Only once did the lens of a smartphone obstruct our view.

Although Goswell wasn’t pitch perfect for the melancholic dirge of ‘Machine Gun’, her vocals float above Halstead’s deeper tones in the lullaby-like melodies of ‘When the Sun Hits’, throwing the crowd into a state of appreciative awe. Goswell quips ‘we’ll go a bit pop now’ before bringing in their most popular song ‘Alison’ – a surprisingly buoyant rendition that encouraged the audience to join in. Slowdive nearly concluded the concert with their cover of Syd Barrett’s hauntingly beautiful ‘Golden Hair’, but they returned for an encore of ‘Albatross’ and ’40 Days’ to enamour us all over again. We couldn’t stop smiling when we dragged ourselves back to the 134 bus stop. Let’s hope it doesn’t take another 10 years for Slowdive to reunite. If they take on the summer festival circuit, we’ll be waiting for them when the sun hits.