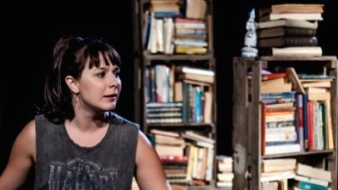 Rosie Wyatt has the audience completely transfixed throughout her hour-long dramatic monologue, written by Clara Brennan. It is a particularly demanding task for a single actor to command and maintain that level of attention, but as ‘Spine’ came to a close, there was that communal exhale of breath that dramatists are always searching for.

The production, having transferred from a hugely successful Edinburgh Fringe run, is galvanizing and very funny; Wyatt’s performance is masterful. Wyatt’s character, Amy, starts angry, black-eyed and verging on desperate. She just about conceals her vulnerability under gobby, caustic humour – the self-defence mechanism of somebody who has always been forced to fight her corner. Amy’s tale of friendship and redemption begins after she has been kicked out of her mum’s council house. She answers an advert for a flat share and meets Mrs Glenda, an elderly activist and radical feminist. 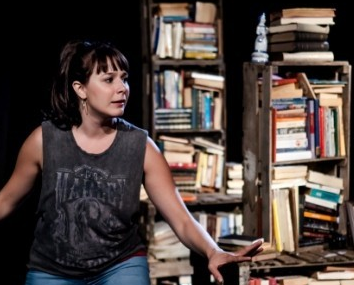 It is impressive to watch Wyatt switching between characterising Amy and impersonations of Mrs Glenda, establishing the latter as a credible and often hilarious character in her own right while keeping Amy’s voice firmly in the background. Ghosts appear in the narrative, and at times it almost seemed as though the dead Mrs Glenda is speaking posthumously through Amy. However the fleeting moments when ghosts became the central focus of the story were the only awkward, unconvincing instances in an otherwise compelling production.

Hard-hitting questions of politics and gender are presented unapologetically, but never didactically. Mrs G is often sharply perceptive; on the subject of Libraries she clarifies ‘Of course they want to close them down … they’ve nothing for sale’. However astute observations are encased within the half-senile musings of an eccentric old lady. Alongside the audience Amy progressively realises the value of what Mrs Glenda says – she grows from mocking disinterest to passionately listing women in literature, a crescendo that ends on her screaming out ‘and Anna fucking Karenina’.

Whatever the audience’s political leanings, it would be difficult not to be moved by Mrs Glenda’s speech reminiscing about the political vigour of her youth, the ‘NHS being built before our very eyes’. Placed in conjuncture with her being unable to remember, when half way up the stairs, why she is there at all. Brennan makes a strong case against political despondency, particularly of young people.

Whether it resonates more on an emotional or political level ‘Spine’ is really about storytelling – from the books that Mrs Glenda has stolen from a repossessed library to Amy’s first journey into literature. Ultimately, Spine’s narrative is spellbinding.

‘Spine’ is showing at the Soho Theatre until 2 November. For tickets and information click HERE