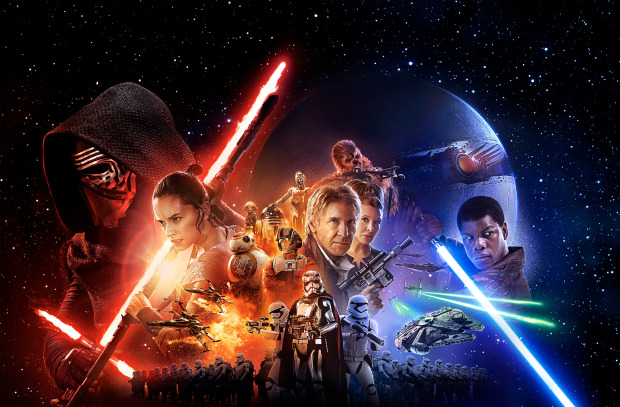 Star Wars: The Force Awakens will soon be the highest-grossing film of all time and has shown, quite remarkably, how little the world has actually needed to see in order to become totally captivated by the rebirth of this famous franchise. The mystery and excitement that surrounds this continuation of the Star Wars saga is nothing less than a genius master-stroke of advertising and promotion. The trailers were light on plot, and pretty much everything else apart from visuals and choice selections of dialogue; by showing us less, we can’t help but crave to know more.

Well, now I do. I managed to catch a midnight screening on Wednesday, the first experience of its kind for me, and I don’t think I’ve ever been more excited to be seated in a cinema than when the opening crawl arrived on screen, prompting wild cheers and applause.

Although children were obviously unable to attend this very late showing, the generational range was quite evident; old fans, new fans, young men, elderly couples, middle aged folk – you name it. Fortunately, the celebration of Star Wars didn’t stop at the beginning of the film and throughout the evening clapping and nostalgic wooing continued to ensue. By the end credits I was exhausted – perhaps because it was nearly three in the morning – but the thrilling screening had inevitably had its effect on me.

For those yet to experience the film, I’m going to follow Disney’s example and avoid as much discussion, and perhaps spoiling, of the narrative as possible.

JJ Abrams (Super 8, Star Trek) directs a cast of newcomers, as well as the old familiars: Harrison Ford, Carrie Fisher and Mark Hamill. The Force Awakens picks up here thirty years after Return of the Jedi. The fall of the Empire has precipitated the rise of an equally brutal movement known as the First Order, leaving the Resistance to continue their liberating and rebellious efforts. When disenchanted stormtrooper Finn (newcomer John Boyega) decides to abandon the cruel regime he has fought all his life for, he meets a young scavenger named Rey (another newcomer, Daisy Ridley). The two of them accept a mission that could save the galaxy from the tyranny it continues to face. And along the way they meet many different faces: old and new, good and evil. With so much more to say about the story, it’s probably best that you wait to see it unfold in cinemas.

First things first. Yes, it’s true: this is the film you’ve been looking for. Before I say anything else about this latest sequel, it must be stressed that the magic of Star Wars has returned. That isn’t to say The Force Awakens is better than the original trilogy; but, whereas the prequels detached us from the essence of this universe, this film effortlessly drags us back in. Abrams has quite brilliantly constructed a movie which seamlessly fits, like a jigsaw piece, into the mythos, atmosphere and joy of the originals. Although the visuals are, of course, updated to stunning effect, the director here has imbued proceedings with a sense of fun and revelry that George Lucas’ Episodes I-III sorely lacked.

There is no vast amount of walking and talking, sitting and talking or overly explained and needlessly complex politics; this is a Star Wars film which regains the joyously innocent simplicity of previous instalments and it is tremendously exciting for that very reason. The film looks brilliant. Its use of locations, the decision to favour practical effects where possible, the superb costume design: it all makes for one of the most aesthetically pleasing cinematic experiences of the year.

On the other hand, Star Wars was never dependent on the way it looked. A New Hope and The Empire Strikes Back certainly look fantastic for their time, but it would be fair to say that the special effects in these episodes don’t hold up as well today as the films do on a general basis. That is because, first and foremost, Star Wars is all about the characters and our emotional response to their trials and tribulations. I have to be upfront about my prior apprehensiveness towards Daisy Ridley, and her honesty to admit Abrams’ initial criticisms of her acting being “wooden” didn’t ease my concerns. However, Ridley absolutely shines in her first prominent big-screen role, totally alleviating all of my worries. Rey is a sympathetic, resourceful character full of warmth and personality, which importantly facilitates her chemistry with co-lead Finn (John Boyega).

Boyega put in an excellent performance in Joe Cornish’s Attack the Block, but here he makes the big step up with aplomb. Growing into the role as the film progresses, we never get the chance to resent Finn for his former allegiances: he is just far too likeable. Yet there is one man who shines above all the others: Harrison Ford. Rather than just portraying an exact copy of Han Solo’s character from the originals, Ford does something far greater; his subtle and nuanced turn lends maturity and wisdom to a figure we have already seen face war, betrayal and almost his own death. This is a superb achievement for Ford.

Star Wars is a saga founded upon the balance between good and evil, with the thin line existing between the two very different sides of the force always threatening to tip the scale. Without spoiling anything as far as the movie goes, this is a theme that is really well addressed in The Force Awakens and, just as the case was with Luke and Vader in the original trilogy, the emotional core of the film is reliant upon this. We care about the characters because we are able to understand the difficult relationships which exist between them and by seeing them grow during the 130-minute runtime – not excessive in the slightest – we are desperate to see where they end up in the conclusion.

Regarding the film’s duration, just over two hours feels about half as long as that. This is a story that, for all its emotional resonance and deft character building, never lets up once and, for fans of the series, it will never appear meandering or boring. Moving from set piece to stunt to spectacle at an incredible rate, with such a ferocious level of energy, The Force Awakens is a true crowd-pleaser, and one of the best of its kind. The prequels were never capable of getting audiences clapping, even hollering, in the way I witnessed yesterday evening; for fanboys like myself this was an extremely satisfying experience.

It goes without saying that, much like each and every Star Wars film, The Force Awakens is not a perfect movie. Though, in reality, who could have ever expected it to be? It must be acknowledged how much of the film harks back to the series’ previous entries, particularly Abrams’ professed favourite A New Hope. While the narrative is by no means following exactly the same sequence of events, certain devices and elements of the storytelling feel uncomfortably familiar. Just from the most recent trailer alone, we have our hero starting their journey as a relative pauper on a sand planet; we have a large weapon commanded by the villains; we have an antagonist that sounds like he has laryngitis. The similarities don’t stop there and while they don’t necessarily detract from your enjoyment of the film, it’s possible to see this as a classic Abrams move to, not so much replicate, but pay an excessive level of homage to previous material.

It’s harder to appreciate something if you feel as if you have seen it before. While it would be unfair to say that this is a Star Wars film that doesn’t stand on its own two feet, there are small instances, and even characters, that serve no purpose other than evoking past memories of the franchise. This is a joy for fans perhaps, but, for a new generation of Star Wars followers, more ingenuity wouldn’t have gone amiss. It is possible that the movie is a little bit too erratic and jumpy as well in its attempt to keep everyone interested. The frenetic pace of The Force Awakens isn’t always well executed, or doesn’t translate, as well as it could, but this isn’t so much an issue once you become completely transplanted into the film’s various plot points.

With everything moving so quickly one might suggest that certain aspects aren’t explained fully enough. The joy though is that, with Episode VIII only two years in the distance, our questions may get answers sooner than we think.

I may have only scratched the surface with The Force Awakens in this review but I hope, above all else, I have communicated just how much I enjoyed this film. When you become immersed in what is, for my money, the greatest cinematic universe of them all, it is hard to escape. While Episodes I-III lead us down a path to an emotionally hollow galaxy, Episode VII returns us to the magical, awe-inspiring and fascinating times of old where, even if the familiar plot suggests that there are limitations upon what can happen, there is still so much left to explore.

‘Star Wars: The Force Awakens’ is out now in cinemas.