Tired of Skype’s equivalent to a candlelight dinner, meeting prospective partners on Tinder, and stalking previous ones on Facebook? The Times Magazine featured an article in November on ‘How Teenagers Date’, which had the subtitle ‘Sexts, Lies and Social Media’. A tad depressing and albeit cynical, and that’s just the title! It did pose a good question though: is social media ruining romance?

I’d like to think not. I’ve spent some time hunting down the best haunts for a fun night, looking at bars, pubs and restaurants, all within walking distance from campus. By all means, Snapchat your friends your excitement and Instagram pudding, just ask them out in person, please.

Save up to splurge at the London Cocktail Club. Drinks (starting from £.850) are very much worth it, and hopefully your date is too. Not for the faint hearted, the basement bar plays loud music and the crazy bar men whip up some equally wild and wonderful concoctions. If you fancy some food whilst you’re there, the Egg and Bacon cocktail comes with a crispy rasher and a Haribo egg, although you can’t go wrong with an Espresso Martini for a pick-me-up. Best to sit out the back where there are more intimate corners, as the area by the bar has been known to have lurking hen-nighters.

Not one for the sports-night-Loop regular, the Princess Louise pub doesn’t allow football shirt wearers, thank you very much. There’s also no football-showing TV in sight, so you’ll be forced to talk to your date worse luck. They have a good setup for a relaxed drink with some privacy, with cubby holes arranged around the bar. You can order house wine from £3 and beer on tap from £2.50, but bring cash to avoid the annoying card sub-charge on cards.

Cosy up in Vat’s wine bar, in what feels like someone’s rather homely living room.  You can sit by the fire, or outside on the street to watch the world go by with a bottle of wine starting at £19.50. It’s not too big, nice without being formal, and there’s no dubious lighting. They also do wine by the glass, the cheapest of which is £5.75, and if you’re feeling peckish charcuterie boards are £16 to share. 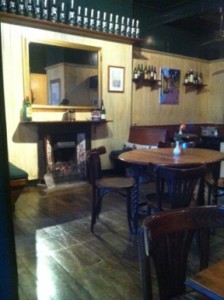 Head underground for an all-American-diner experience, where you can eat Southern Fried Chicken in a booth, opposite the bowling alley. If you’re feeling active bowling is £8.95 per head after 6.pm, whilst the bar has a squishy pink 90’s style seating area with disco balls. What more could you want?  Just don’t strike out.

WARNING: boys, watch out for the super sexy bar man, who is likely to steal your date from under your nose.

It’s well worth enduring the queue Bubbledogs’ inspired menu often creates: the combination of sultry lighting and champagne buzz is as brilliant as the wonderfully creative hotdog options, which include the ‘Mac Daddy’, a hot dog for macaroni lovers. As you can’t book for parties under six, it’s a good idea to go for an early or late dinner – aiming for a prime time 8pm sitting is best avoided.

Just off Tottenham Court Road you’ll find Bloomsbury’s grooviest Thai Restaurant, which if you’re happy using potentially awkward chopsticks is a good one to visit. Share their signature dish of Thai Calamari to start, and get the conversation going with some Sake for £4.50. They don’t do drinks only, so you’ll have to get involved with the awesome food menu.

Within stumbling distance of Leicester Square tube, the Mexican Restaurant La Bodega Negra is the perfect place to go for a chilled out but delicious dinner. The slightly arty crowd and fun music make for great atmosphere, whilst mains such as Mexican Quesadillas are reasonably priced at less than a tenner. Let romance blossom alongside guacamole and Doritos, and flirt over – slightly expensive – cocktails; if you’re in need of any Dutch courage the Tequila shot menu is longer than the food one. 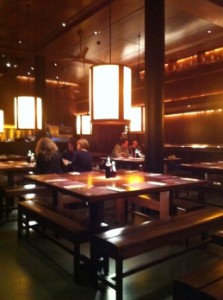