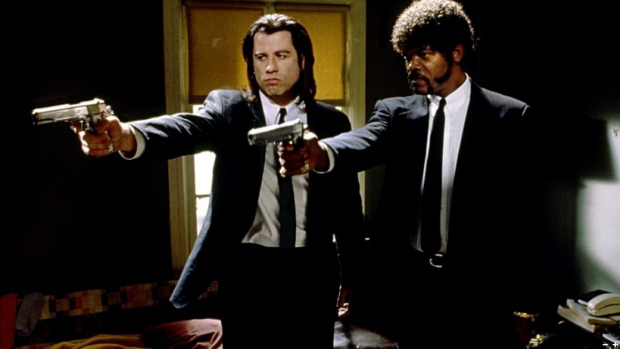 NOAH REICH discusses the changing attitudes towards conflict and violence in Tarantino’s films.

Quentin Tarantino feels at home in the war room. From his directorial debut with Reservoir Dogs (1992), through to the release of his eighth film this year, The Hateful Eight, Quentin Tarantino moulds the lives of his myriad characters into battles of various natures. Some of these battles are psychological and strategic, such as in Reservoir Dogs; some are personal, such as in Django Unchained (2012); others are of a more recognisably military quality, as seen in Inglourious Basterds (2009).

Tarantino’s most recent films are pulpified odes to bygone eras of film-making imagined through historical contexts. The premise for each of these historical fictions is war in its various forms. According to Tarantino, Basterds attempted to do to the Second World War what Sergio Leone has done with the history of America’s Old West; distilling the often muddled, complex histories of the rival factions locked in a battle for supremacy, into the lives of noteworthy and individual characters. Tarantino, remarkably, manages to humanise opposing sides of the conflicts that he depicts with real intelligence – the most memorable characters of his recent works are, without question, his villains. From Christoph Waltz’s terrifying portrayal of Nazi Colonel Hans Landa, through to Leonardo DiCaprio’s infamous slave-owner Calvin Candie, and including Jennifer Jason Leigh’s blood-soaked Daisy Domergue, Tarantino’s narratives often draw their unsuspecting audiences towards the bad guys.

This is a phenomenon that Tarantino has sought to exploit in almost all of his films. It’s easy to forget that Vincent Vega is a hit man by trade in Pulp Fiction (1994), or that ‘The Bride’ is a ruthless murderer of anyone who stands in her path in Kill Bill (2003). It is telling that Death Proof (2007) is probably his least successfully realised film, and simultaneously the one in which we are drawn to the villainous protagonist, in this case Stuntman Mike, to the least extent. We are left less of an internal struggle as viewers. Kurt Russell’s character is almost wholly unlikeable and, without the razor-sharp wit that most of Tarantino’s villains possess, we are left craving the stuntman’s death, rather than devilishly relishing his screen-time.

Although we are never enamoured with Waltz’s Landa – he is a Nazi general after all – he does command the attention of viewers. The first scene of Basterds, in which Landa rattles the floorboards of the house that he is inspecting, is one of the most hauntingly memorable scenes of 21st century cinema. Tarantino is aware that despite the fact that we cannot necessarily relate to his villains – Nazis, slaveholders, murderous gang-members – he can try to bring us as close as humanly possible to doing so, and draw humour and intrigue from their portrayals.

The setting of war for these historical recapitulations is one that fits perfectly for the director to accomplish these cinematic goals. Tarantino is able to present a setting in which the audience ought to feel comfortable with which side their allegiance falls on, and tests their resolve to do so.

Equally, though, they represent the perfect vehicle through which Tarantino can make the cinematic and cultural references that he has, rightly, become famous for. During Vincent and Jules’s drive to the house in which they assassinate a group of unsuspecting young debtors, it is their nonchalance in discussing the ‘Royale with Cheese’ that makes the pulpy allusion so memorable. The tight juxtaposition of the sharp cultural reference with the graphic violence that follows is what makes the scene stand out for the modern viewer. Even Jackson’s iconic quoting of Ezekiel 25:17 before his ‘great vengeance’ strikes upon the ‘evil men’ that surround him is an allusion to Takamori’s Japanese film Bodyguard Kiba (1973). Similarly, a scene in Basterds, where is relatively clear to the viewer will end in violence, presents the characters preoccupied with a bar game, in which Michael Fassbender and Diane Kruger guess at the celebrities and films that are written on the cards dealt to them, discussing the relevance of King Kong (1933) in the process.

The irreverent humour that Tarantino uses whilst depicting seriously grave scenarios is often criticised as gratuitous and self-indulgent, but the sharp dialogue draws the audience themselves into the director’s games, rendering the viewer unaware of their previously stable surroundings and submerging them into the film’s battlefield.

In his early career, Tarantino dealt with urban gangsters and criminals. But recently, Tarantino is using his films to come to terms with how he feels that America has erroneously brushed its turbid history of race relations under a rather unsavoury carpet, to pay homage to the great and little-known films and TV shows that have inspired his work, and to unleash his trademark violent streak in, I suppose, peace.