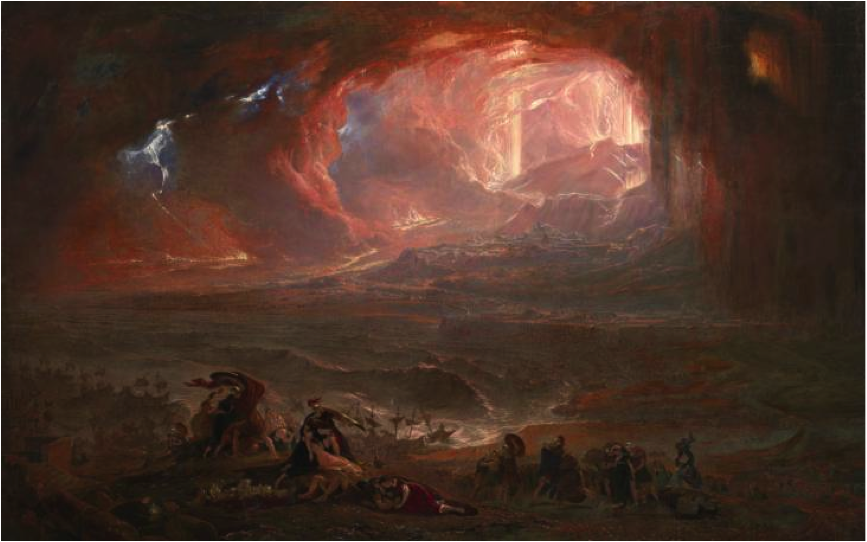 “I hear the ruin of all space, shattered glass and toppling masonry, and time on livid final flame. What’s left us then?” Joyce’s Ulysses is a compendium of applicable quotes for an infinite number of subjects, and Tate Britain’s newest exhibition is no exception. Referenced in the accompanying book by Brian Dillon, co-curator of the exhibition, the quote cleverly illuminates the temporal aspect of the exhibition, which can often be unsuccessful or rare in many art exhibitions. I feel, however, that this is the crowning achievement of Ruin Lust.

The exhibition begins with John Martin’s The Destruction of Pompeii and Herculaneum, a herculean (excuse the historically inaccurate pun) painting depicting the explosion of Mount Vesuvius in AD 79. Grandiose, vivid, and though somewhat an obvious start for the theme of ruin, the painting begins the non-linear progression of artwork throughout the exhibition.

In my opinion, one of the key strengths of the exhibition was its ability to place different styles of work, from different periods, within the same context of ruin. While 19th century art became somewhat ubiquitous through the first rooms of the exhibition, they were well contrasted by 21st century works such as the bludgeoning and ambiguous Azeville, by Jane and Louise Wilson in 2006. The divergence of subject and mode unify the styles, themes and subjects of all (well, most) works in the exhibition under the auspices of ‘ruin’, questioning the audience as to what constitutes a ‘ruin’, and what fascinates the human mind about them.

Of course, one cannot forget to remember that ruinous obsession became prevalent in the late 18th century European culture as a result of all art forms; naturally, Wordsworth’s Tintern Abbey springs to mind, not to mention Shelley’s Ozymandias. Not failing to deliver, the exhibition displays JMW Turner’s startlingly beautiful Tintern Abbey: The Crossing and Chancel, Looking towards the East Window. The work exhumes eighteenth century Romantic pleasure, and while the subject was beautifully conjoined by pieces such as Eduardo Paolozzi’s Michelangelo’s ‘David’?, it did not lean as earnestly into the more experimental modes of art as it might have done.

Tacita Dean’s 2006 film piece, Kodak, depicted the final manufacture of the company’s monochrome standard 16mm film. What’s clever about the piece is its own cyclical style; Dean uses the medium of film to depict the dying age of Kodak monochrome film in its process of being made. While this is internally a clever concept, its inclusion in the exhibition as a whole seemed weak and disjointed. Where the curators successfully displayed Lucy Oldfield Ford’s 2010 Ferrier Estate against Joseph Gandy’s 1830 Birds Eye View of the Bank of England (a stunning piece and prime example of the concept of ruin), the physical spacing of Dean’s artwork felt more like a throughway than a part of the exhibition. What followed continued to correlate with the exhibition’s consistent focus on aesthetic appreciation of ruin, but with less of an impact as the previous rooms. Henry Gibbs’ Aeneas and his Family Fleeing Burning Troy sat uncomfortably adjacent to Patrick Caulfield’s Greece Expiring on the Ruins of Missolonghi, whereas John Latham’s Five Sisters Bing project would have made a larger impact in an earlier room as the concept perfectly depicted the aesthetic issues entirely surmised in the German concept of ‘ruinelust.’

Brian Sewell – an insurmountably more knowledgeable art critic than I ever could be – also reviewed the exhibition in the London Evening Standard, saying that the “sole duty [of the new breed of curator] is to convince the passing hoi polloi that the art of the past and the art of the present are not so much the two ends of a single and unbroken — even unbreakable — thread, as an intricate cat’s cradle in which nothing has primacy and everything is equal.” While I tend to agree with him in regards to art as a concept, I don’t believe that this is entirely what the exhibition did. Yes, there were undoubtedly acquisitions and loans that may not necessarily have contributed to the aesthetic of the exhibition (Caulfield’s 1964 Ruins could not grab my attention for more than a few seconds), but overall the showcase of art depicting the dilapidation, destruction and astounding beauty of ruinous landscapes reached a conclusion, by the end, that was both profound and enlightening.

Inventory’s Estate Map, 1999, in itself a dilapidated map of one of many of London’s ruined estates did this for me. The end of the piece read, “Yet this neutering of our sovereignty must continue to be resisted at all costs – we should understand this as an incitement to endless revolt, a provocation that acknowledges you are he, you are her, year, hour, err.” One of the many quotes that run alongside the exterior of the exhibition space is Rebecca Solnit’s, from The Ruins of Memory: “A city – any city, every city – is the eradication, even the ruin of the landscape from which it rose. In its fall, that original landscape sometimes triumphs.” Together, these surmise the crescendo of impact that Ruin Lust imposes on its audiences: that these buildings, relics and monuments are memories of history, a revolt against former codes of architecture and inextricable societal values in some cases, an appreciation of them in others. And while, at times, the exhibition reached tentatively towards more metaphorical aspects of ruin that did not wholly satisfy, overall it presented the concept as eloquently, subtly and diversely as one could hope the Romantic notion of ruin could be displayed.