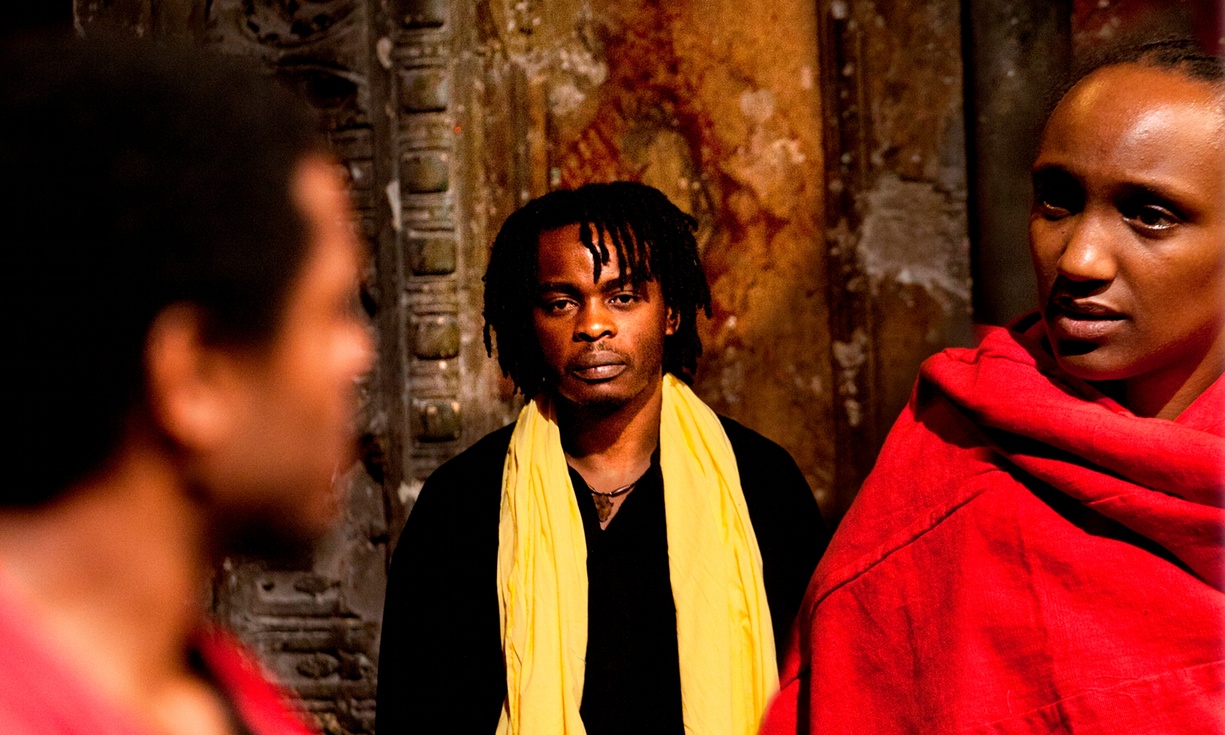 Sat in The Cut bar of the Young Vic, soaking up the pre-show ambiance for Peter Brook and Marie-Helene Estienne’s Battlefield, seemed the perfect place to flick through the programme and get a sense of what I was actually seeing. What you cannot underestimate, however, is how difficult it was to read Scott’s interview with the sixty-something year old woman next to me slurring complaints about the lack of vodka in her drink.

Brook’s new play is a reflection of the human attitude towards conflict and destruction. The small cast of four actors explore the self-inflicted irony of war and mankind’s innate desire to fight. Critics could easily see it as a commentary on the ridiculous situation we have created in Syria. The play is carried by the fact that, as brothers, the two fighting sides come from the same source. The selected anecdotes from the Mahabharata also resemble Biblical teachings. We are told that the two fighting brothers were raised separately because the elder was born out of wedlock. He was put in a basket to float down the river for his own protection, a story reminiscent of the birth of Moses in Jewish and Christian tradition. It doesn’t take much to see these similarities as a deliberate effort to emphasize the inconsistency of religion as a source for conflict. As humans, we all come from the same source, and ultimately share the same values regardless of the religion we choose to express them.

The actors master the difficult task Brook and Estienne have set them in conveying these messages. Of particular note are the performances of Carole Karemera and Sean O’Callaghan, playing the mother of the two sons and the old king. Both Karemera and O’Callaghan’s naïve response to their eminent death in the forest fire not only describes their hunger, but also ridicules the wider message in ‘Battlefield’ that we bring war’s suffering upon ourselves. The light-headed, ditzy way they walk into death almost mocks how unnecessary and avoidable the whole situation is. In much the same way, Ery Nzaramba’s comic moments embrace this irony. Maintaining the humor in the Mahabharata’s bleak situations undermines the characters immediate circumstances, but underlines the point that such human-inflicted suffering could be entirely avoided. The cast should thus be praised for achieving these two performances simultaneously.

Yet I fear that the plays message largely fell on the deaf ears of self-proclaimed vodka-deprived audience members. Maintaining their attention is the true battlefield the arts fight on today. The two men sitting next to me were a case in point. Already hammered, both were extremely vocal about their plans for the pub later. This is the attitude theatre is now at war with. Playwrights are fighting from a position as time-fillers before their audience moves onto the next part of their evening. Battlefield itself was inspired entirely by Brook’s 1980’s epic The Mahabharata. Thirty years ago, Brook’s 9-hour play was received with critical acclaim. 2016, the bloke next to me couldn’t even keep his eyes open for 70 minutes. Brook nods towards this challenge the internet-generation’s need for instant gratification presents artists in his interview; when it comes to the performance, ‘nobody can think of anything but the immediate’. The question is, what price has theatre paid for plays of constant stimulation, where the ‘immediate’ has become so trivial? The subtle commentaries on mankind must be sidelined for cringe worthy addresses to the audience (“who is poor in here? Are you poor? No I didn’t think so”) just to jerk spectators out of their doze.

The choice of venue in the Young Vic is just the cherry on top of my point. One of my favorite theatres in London, after each play it strips the stage and seating bare and completely remodels. After seeing ‘Battlefields’ fight to retain its audience’s attention, I realized the Young Vic does the same for its crowd by constantly providing them with something new. In the case of a theatre venue this is an extremely exciting direction for the arts to move toward. The battle against vines and gifs means that this theatre has had to raise its game to keep drawing an audience. Yet for the plays themselves, I cannot overcome a conservative attitude that drama should stand strong in the war against the Internet and instant reward. Plays like Battlefield provide the medium for genuine reflection on our society. It would be tragic to lose that because directors decide the battle for the audience’s attention is more important than the war for legacy – in which only the timeless plays emerge victorious.

‘Battlefield’ is showing at The Young Vic until 27th February 2016. To book tickets visit http://www.youngvic.org/whats-on/battlefield.