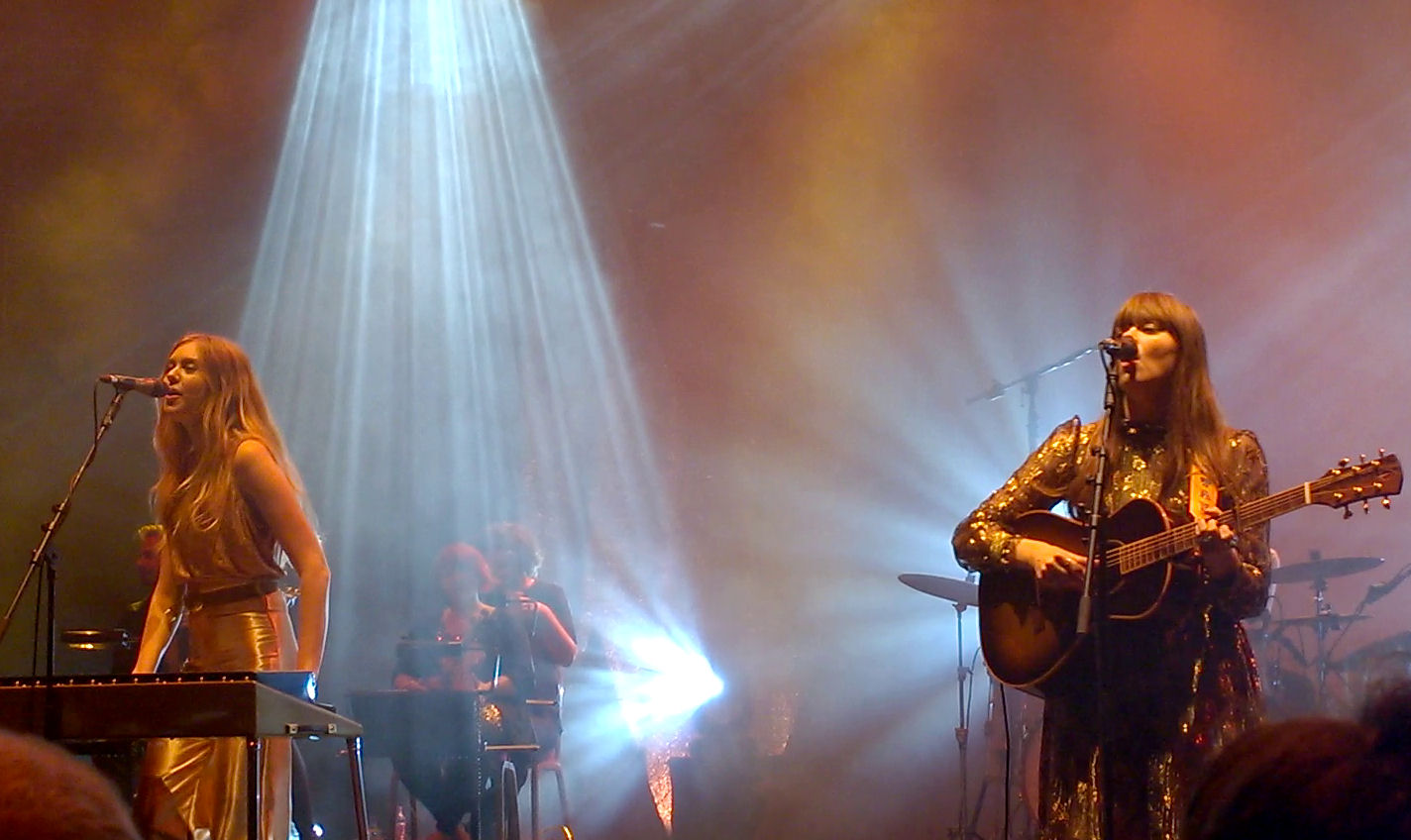 This two-sister act from Stockholm, playing a 70s-shaded Americana, have been slowly building a large fan base in the UK over the past five years, and so playing in the hallowed space of the Royal Albert Hall feels like a milestone for them. Especially given their now retro MySpace origins.

Tonight’s show kicks off with the band’s string quartet intoning some deep notes from ‘Stay Gold’, the title song of this year’s album. It is a strange opener given the fact that its lyrics are pretty depressing; for example, ‘what if to love and be loved not’s enough’ and ‘so dawn goes down to day’. It is an existential crisis of a song, but some soaring pedal steel that teases out the long aching notes, and the sisters voices floating above, ensure that it doesn’t dampen the audience’s enthusiasm.

I assume that, you’ve ever read or heard anything about First Aid Kit before, you’ll have noticed a disproportionate focus on their voices. Yet it’s well deserved attention – their harmonising is perfect, reaching the kind of musical heights only two very talented siblings could reach. And tonight they are on exceptional form, lending each line the ideal amount of emotional subtlety and bittersweet melancholy it calls for. They even take an unexpected turn into full-on rock ‘n’ roll territory with a cover of Jack White’s ‘Love Interruption’, snarling out his most violent fantasies.

One of their best songs, ‘The Lion’s Roar’, gains a mysteriously dark and troubling intro – drawn out, chilling steel-pedal notes complete with rolling drums and cymbals before they move into their tale of forests, lakes and heart-rending longing. It gains some extra fire in this live performance thanks to some additional headbanging – not usually associated with country-folk sister acts, but it is appreciated all the same.

The pair also makes the unusual decision to go microphoneless with a rendition of one of their earliest songs, ‘Ghost Town’ from their debut album. It is testament to the sheer power of their voices, which easily fill the entire room keeping everyone captivated. It makes for a pretty magical moment with the audience whisper-singing along, not wanting to overpower them.

Everything about the duo, from their songs to their luminous gold outfits, is heartfelt and wide-eyed. The genuine rapport they have with their fans is obvious from their unaffected stage-chat, including some so-bad-they’re-almost-good cheese jokes they provide when a keyboard malfunctions.

They finish the night off with fan favourite, Emmylou: a paean to country’s old icons and hope-filled love in hard times. The crowd sing along at the sisters’ request, trying and failing to match their voices as they extend the song for a few extra minutes.
It is a fantastic performance from an incredibly talented band: there’s no sense of artistic vanity – encouraging their audience to join them singing, with no thought as to how it might taint their pitch-perfectness. It is clear that they are simply overjoyed to be playing such a famous venue as it is a sign of their fans’ adoration for them. They respond with an incredible set of heart-warming songs.