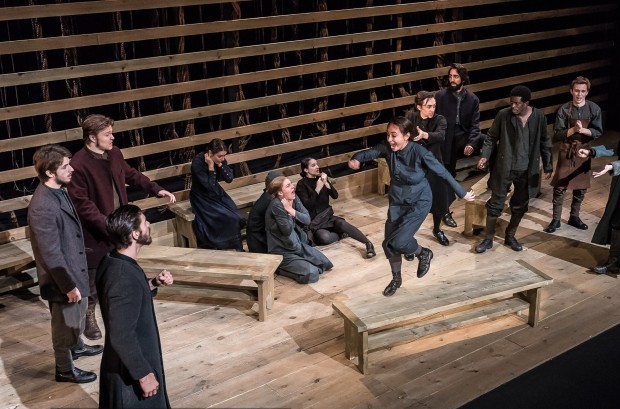 COLETTE ALLEN reviews the Guildhall School of Music and Drama’s production of ‘The Crucible’.

Any school taking on ‘The Crucible’ does so in the knowledge that they take on one of the most reputable plays of the 20th Century. Arthur Miller’s portrayal of the 1692 Salam witch-trials drew much needed criticism toward the mass hysteria that took place under the Senator McCarthy’s Red Scare. It has been performed brilliantly in many schools as well as professional theatres, which mean that most observers already have a preconceived idea about direction. Productions therefore become subject to intense scrutiny, particularly at moments when politics feels especially unstable; in this context each and every action is judged by many criteria.

The Guildhall School of Music and Drama, performing at Milton Court between the 17th and the 21st of October, were well aware of this fact. Indeed, they lapped up the attention. Unfortunately, the result was an exaggerated performance that lost the subtlety of Miller’s poignant references. There is, I am sure, room for an interpretation that ‘the overacting captures the ridiculous drama of the McCarthy era’–but even my own high threshold for pretentious boloney shudders as I write that. Sometimes you just have to call out the ham.

If Samuel Blenkin was going for a suspiciously twitchy Reverend Parris, kudos. Yet in doing so he set a tone for the whole play to border on the ridiculous, which culminated in Rebecca Nurse’s (Katherine Laheen) feeble fall onto John Proctor (Caleb Roberts) as they walk to their death –‘I haven’t had breakfast’. Similarly, a simple set of exposed wooden beams and naked tree trunks sets the necessary small town tone; what was not needed was the commotion of these trees dancing during John Proctor’s courtroom breakdown. No doubt this was meant to symbolize that, at this point, everything we know to be true has been uprooted. Yet once again, the execution left the audience muttering rather than thinking.

‘The Crucible’ itself is dramatic enough. Over-acting undermines its perceptive connotations. While stronger performances come from the likes of Lucie Fletcher, whose well-balanced adaptation of Abigail’s flip-flopping standards captured the period of the Hiss-Chambers trials that Miller wrote in. I am aware that to perceive this interpretation requires a fairly acute knowledge of 20th century American history, something others in the audience may not have shared. For them, most of Miller’s brilliant political allusions were lost as the performers, like those swept up in the witch-hunt, provoked each other to get more and more theatrical. Pronunciation was clear, but heightened the inexplainable random Somerset absents.

It is a particular shame that this representation was so weak given its timing in the run up to the US election in November. There are clear similarities between Joseph McCarthy’s blatant political lies and Donald Trump’s. What is more interesting, however, is the link of their hunt for a scapegoat. In many ways, Trump uses the Islamic issue in the same way McCarthy used the communist. A recent adaption of ‘The Crucible’ on Broadway has made the decision to set the whole performance in a modern context, perhaps wishing to capture the political parallels between Salam, McCarthism and (what hopefully wont be) Trumpism. From the impression given in their programme, I believe this was an angle the Guildhall was also trying to explore. Unfortunately it was by no means clear: there were far too many distractions.

It is a difficult time to take on such a political and well-known play; the steaks are so high due to the heightened political tensions particularly in America. I admire the Guildhall’s acceptance the challenge. However rather than using the drama of political life to their advantage, this production’s hysteria failed to feel credible.