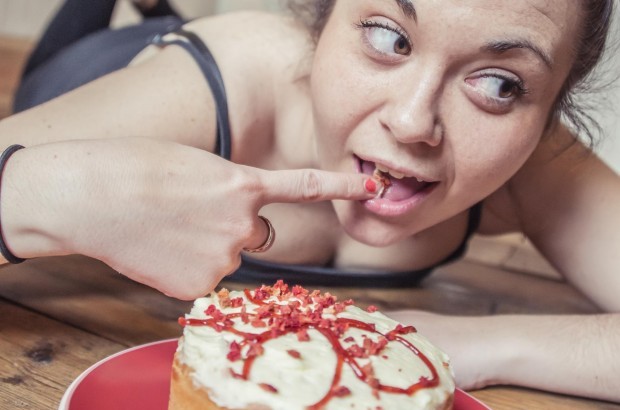 JENNA MAHALE ventures into the fraught battleground between dance and food in the spoken word performance, Fat Girls Don’t Dance.

‘They most certainly do dance, I’ll tell you that. I’ve seen plenty of fat girls dance. They love it.’ chuckles a security guard at the door of The Roundhouse as he punches my ticket. Unsure about the levels of sarcasm and sexism in his tone, I go for what I deem to be a neutral, if patronising, response: ‘I think it’s meant to be ironic’.

It’s an apt introduction to the undercurrent of social judgement fuelling the problems that Fat Girls masterfully picks apart. Drawing on personal experiences, Maria Ferguson launches into an engaging combination of girl-talk, a capella remixes, and choreography from a range of different schools of dance. The performance addresses childhood ambition, underage drinking and working at a call centre, but at its core is a battle between Ferguson’s two great loves: dance and food. Caught in the middle of beauty’s double standard, Ferguson finds herself unable to find work in show business because she’s ‘too fat to play pretty, too pretty to play fat.’

The charm of the performance is unparalleled and Ferguson makes herself instantly familiar, imbuing Fat Girls with the personal rhetoric of a life-long friend. We laugh when she laughs, and we certainly feel her pain as the impact of the throwaway comment, ‘you don’t look like a dancer,’ sends her crashing to the floor. Still prostrate, Ferguson turns to us, eyes brimming with tears, as Meghan Trainor’s All About That Bass blares out across the room with futile effect. Speaking to Maria after the show, she tells me that the scene is purposefully ambiguous to reflect the mixed response the song has received from women. Though Maria thinks the song is ‘awful’ (and given the overwhelming self-objectification in it, I agree), while she recognises that for some it is empowering.

Ferguson is able to skilfully manoeuvre dramatic shifts in tone, lurching from a chatty anecdote to a trembling denial of hunger. Hunched over on her knees, still shaking, you know exactly what Ferguson refers to when she feebly claims, ‘I don’t do that anymore’, before discussing tips for hiding bulimia. It’s important to note that Ferguson treats the topic very seriously, exclaiming at the end of the performance that anyone is welcome to talk to her about the subject matter addressed.

Fat Girls Don’t Dance shares with us many of these intimate moments, some of which are all too familiar to too many of us. One of the most powerful moments is her posturing in front of an inferred mirror to hide her stomach. Tragedy and comedy blend seamlessly as she asserts, ‘you wouldn’t believe how much I’m running.’

The stand-out section of the performance is undoubtedly when Ferguson feeds her audience. Joking with spectators, she brings out a Sainsbury’s bag brimming with calorific goodies and hands out crisps, teacakes, and French fancies (the yellow ones are her favourite); she even holds a poll, pitting custard creams against bourbon biscuits. It’s a delight to behold and to participate in. There’s something very special about being in a room full of (primarily) women, laughing and sharing food that they love but are taught to treat with enmity. ‘Ooooh yeah, they’re good!’, croons Maria in response to a collective gasp elicited by the appearance of a box of chocolate fingers.

Fat Girls Don’t Dance is a frank, much-needed discussion about body image today and what it means for women, especially for those under the constant scrutiny of the spotlight. By sharing her experiences, Ferguson challenges the guilt-ridden rhetoric surrounding food and encourages audiences to accept and embrace their bodies. Spectators leave emboldened. Despite all of the criticism and rejection, Ferguson is here, and she is dancing just as her dreams have always willed her to do, and the message is clear: so can you.

Fat Girls Don’t Dance has ended its run at the Roundhouse, but will be performed on November 23rd at the Maud Theatre in Walthamstow. For more information,  and to book tickets, visit http://beartuza.com/tickets/ .