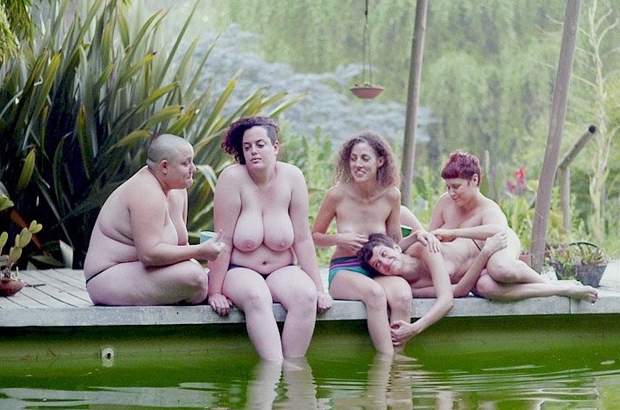 A trip in every sense of the word, the plot veers indiscriminately from reality to fantasy, and through hazy amalgamations of both. Shunning the traditional trajectory of the classic road-trip narrative, it offers no distinct endpoint beyond a half-planned visit to a family home. Here, the film comes to a close with a sense of much territory yet to be discovered, perhaps stretching on eternally; it seems to whirl headily on into the distance beyond the credits.

Tearing through the land in a stolen car, the group’s seemingly uncertain destination does not dull their passionate pursuit of the journey itself. The film’s refusal to bow to traditional narrative structures creates a non-linear, dreamlike form. As a result, the viewer is sent spinning through conundrums about how a distinctly female experience of pleasure, desire, and discovery can be presented without falling prey to patriarchal influence.

Drifting from serene to hallucinogenic, the cinematography helps to illuminate curious parallels between the bodies and landscapes. The camera’s caress bestows upon forests and mountains a carnality which elevates sex to the transcendent. Mirroring nature in the varied landscapes that constitute the characters’ bodies, Carri acquaints the viewer equally with each.

Self-aware in its exploration of what constitutes pornography as well as its boundaries and intersections with art, the film wryly comments upon itself: ‘lots of log shots for a porn movie, don’t you think so? Our viewers are dozing off’. These meta-cinematic qualities foreground questions of artistic integrity, and query (and queer) notions of plot and narrative. Contemplating her own cinematic aims, protagonist Violeta poses that ‘the problem is never the representation of the bodies; the problem is how those bodies become territory and landscape in front of the camera.’ In a bid to unravel and recast this territorialisation of the female body, Carri rebuts both creative and political constraints; the film’s flesh is not framed for conquering. It bypasses the male gaze and frees itself from patriarchal tropes of possession and linearity. Emancipated, like the cyclical female pleasure depicted, it roams more roundaboutly in a plane of its own.

In this sense, the film is not merely ‘LGBT’ but resolutely Queer. It offers a fluid, euphoric, subversive and unabashed exploration of female sexuality. Appropriating the patriarchal imagery of a Western-style gang, one scene shows the women’s sexual camaraderie empowering them to rise against a friend’s abusive husband. The film does not naively present a utopian free-love fantasy; refusing to shy from the jealousy often entwined with polyamory, it instead engages with these emotional realities, and their powerful sexual potential. A nervous Agustina lets slip the odd barbed provocation – ‘oh well, I guess she does everything right’, or ‘are you going to fall for her, too?’ – but her statements seem to intensify the trysts that follow, much more a lover’s pinch than a piercing bite.

Despite the focus and insight offered by the voiceover, the film remains deliberately challenging and abstract. Put crudely, it’s a weird one. You’ve got to be ready for two hours of revolving confusion, arousal and enlightenment – sometimes all at the same time. Carri is acutely aware of her own oddness; at its weirdest moments, the outrageous eccentricity has a humorous undercurrent that keeps it on the right side of pretentious. By the film’s orgiastic and full-frontal finale you think you’ve reached the out-lands of outlandish – cut to naked roller skaters in wrestling masks, offering up sliver plates of dildos like they were canapés. Skewed and strange, The Daughters of Fire is a psychedelic and circuitous foray into sex onscreen. Come and have a go if you think you’re queer enough.