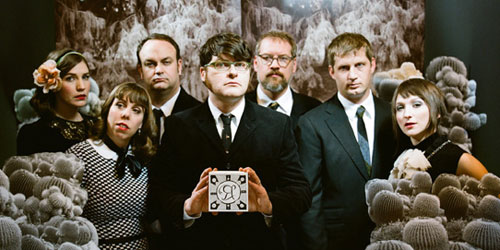 PHYLLIDA JACOBS spends a night with The Decemberists at Brixton Academy.

After a four year hiatus, The Decemberists have made their much anticipated return, touring again with their new album, What a Terrible World, What a Beautiful World. They are supported by Serafina Steer, whose beguiling folk artistry is interesting but nowhere near powerful enough to fill the venue, or to match up to the main act.

After a slow fanfare, Meloy enters the stage and launches into the opening track from the new album, ‘The Singer Addresses His Audience’, a playfully sardonic take on the musician’s relationship with his fans. The rest of the band assemble around him, along with backing vocalists Kelly Hogan. “We had to change” is the overriding message of the song, which is followed up by the poppy string-led optimism of ‘Cavalry Captain’. It’s clear that these new songs mark a shift away from the arcane historical references and obscure vocabulary to a sound that is cleaner and lighter, but still uniquely theirs.

They then return to fan favourites from The King is Dead, the harmonica infused ‘Down by the Water’ and the apocalyptic ‘Calamity Song’. The band may have changed direction in recent years, but they don’t shy away from their past, running through the dreamily mournful ‘Grace Cathedral Hill’ and the 12 minute-long prog folk epic, ‘The Island’.

The Decemberists prove they haven’t lost their flair for the theatrical with three songs from their elaborate folk-opera The Hazards of Love, ending with Meloy bathed in red light for the wonderfully menacing murder ballad ‘The Rake’s Song’. “Why are you cheering?” he quips, “that’s a terrible song.” His enthusiasm is infectious, stirring even the most cynical of audience members to sing along with ’16 Military Wives’ and ‘The Legionnaire’s Lament’.

They end the set with the quintessential Decemberists song ‘O Valencia!’, bringing together the old preoccupations of historic Europe, star-crossed lovers and murder in a melodic anthem driven by John Moen on the drums. The band come back for ’12/17/12’, a wistful reflection on parenthood in the wake of the Sandy Hook Elementary School shooting.

Their final encore is the darkly fun sea shanty, ‘The Mariner’s Revenge Song’, which descends into riotous accordion-fuelled melodramatics, with the crowd instructed to scream as though they’re being swallowed by a whale, eerie vocals from keyboard player Jenny Conlee, and the whole band collapsing and playing dead on the stage. The Decemberists have changed a lot since we last saw them, but they have kept the spirit which won them so many dedicated fans.