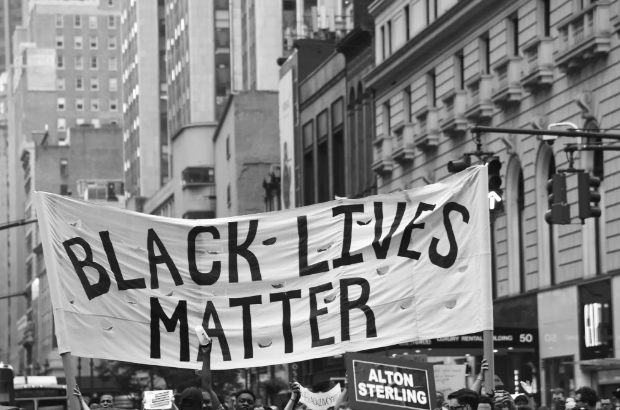 SHANTI GIOVANNETTI-SINGH reviews George Tillman Jr’s The Hate U Give.

There is a particular poignancy which arises from works of fiction that resemble reality. Watching films like Danny Boyle’s 28 Days Later… amidst a pandemic is, at the very least, eerie and unsettling. Even more disturbing are those fictional works whose image of a dystopian future increasingly resembles the broken present. Perhaps the most notable examples include Orwell’s 1984, or Atwood’s The Handmaid’s Tale. These tales respectively depict a failed society, in which misinformation prevails, the subjugation of women is mainstream, and government surveillance abounds. These often sensationalised works serve as a warning, as a desperate call for help. They represent an artist’s fervent plea for their dystopic vision of the future not to materialise.

There is, however, a very different kind of horror associated with the ‘fiction’ that not only reflects reality but is indistinguishable from it. The type of ‘fiction’ which depicts the real experiences of millions of individuals. A ‘fiction’ so pertinent, that it resembles the images and the stories depicted on the news. This specific form of ‘fiction’ uses art to explore a reality which has existed for centuries, and which, most likely, will continue to exist for centuries if mass reform does not occur. This particular type of fiction addresses a truth which is so deeply disturbing, that one can only wish for its fictitious nature. This is the ‘fiction’ of The Hate U Give.

In September 2018, George Tillman Jr’s film adaptation of Angie Thomas’ novel The Hate U Give premiered at the Toronto Film Festival. Despite being released almost two years ago, its relevance and actuality is, if anything, even more pertinent today. As the world attempts to mourn and process the horrific murders of George Floyd, Ahmaud Arbery, Breonna Taylor and Tony McDade (to name just a few), the scenes depicted in The Hate U Give appear painfully familiar. The Hate U Give tells the story of 16-year-old Starr (Amanda Stenberg), who witnesses the murder of her best friend and childhood sweetheart, Khalil (Algee Smith), after they are stopped by white police officers. Whilst Khalil’s tragic fate bears a resemblance to many cases of police brutality, it is particularly evocative of the murder of Khiel Coppin in Brooklyn in 2007. Coppin was just 18-years-old when he was shot dead for holding a hairbrush, which the police supposedly mistook for a gun. How this misunderstanding could occur is a concern that is mulled over throughout Tillman’s film, where Khalil’s murder is prompted by a similar error. This is encapsulated during a poignant exchange between Starr and her white, upper-class ‘friend’ Hailey, where Starr grabs a hairbrush from Hailey’s school bag:

Starr: What’s this in my hand right now? You gonna tell me it’s a weapon?

Hailey: In his hand, yes.

The extent to which racial prejudice poisons society means that, in the hands of a black man, a hairbrush automatically turns into a weapon, in the same way that a black man running must have committed a crime. These fatal assumptions have cost the lives of thousands of innocent black men and women. Without such assumptions, perhaps young men like Stephon Clark – killed at 22 years old for holding his phone– would still be alive today. Instead, the memory of his cruel death lives on in Childish Gambino’s song ‘This is America’.

The complexity and multidimensionality of racial prejudice is a key focus of The Hate U Give. Whilst the plot centres around an extreme form of racial discrimination, an explicit hate crime committed by the police, its subplots illuminate various forms of more subtle racial inequality. Ranging from the microaggressions that Starr experiences, to the media bias in the aftermath of Khalil’s death, The Hate U Give evocatively highlights the ‘everyday’ racism which permeates western society. Before Khalil’s murder, Starr speaks of the ‘code-switching’ she feels obliged to do. Constantly shifting between ‘Starr version 1’ and ‘Starr version 2’, she explains how she adapts her behaviour, depending on whether she is at home – in her predominantly black neighbourhood, Garden Heights– or at her overwhelmingly white, middle-class private school, Williamson. Whilst at school, Starr must watch, silently, as her white classmates appropriate and fetishise black culture, and carefully monitors her own behaviour. Despite her friends peppering their discourse with words like ‘yo’ and ‘lit’, Starr makes a point of avoiding any words ‘a rapper would say’. As she explains, whilst  ‘slang makes them cool, slang makes her hood’. Adapting her language, clothes and mannerism to distance herself as much as possible from the stereotype of the ‘girl from the ghetto’, she reveals the dual standards she is subject to.

In addition to these microaggressions, which typically occur on a personal level, The Hate U Give highlights the systemic racial prejudices which pervade both the justice system and the media. Although Khalil’s case does become a national news story, the way in which it is reported quickly develops into a toxic form of victim-blaming, whereby Khalil’s alleged drug-dealing somehow justifies his murder. This media bias is disturbingly reminiscent of much of the reporting on the current Black Lives Matter protests. Whilst the protestors are repeatedly demonised as looters and ‘thugs’, little mention is being made of the violent means by which the police are ‘controlling’ the demonstrations. This sympathetic presentation of the police is explored in a particularly rage-inducing scene, where Starr and Hailey watch a news special on the officer who shot Khalil. Rather than condemning his behaviour, the program interviews the policeman’s father, and presents him as the ‘good cop’ who protected Americans from dangerous, ‘African-American, gang riddled’ communities. Watching in awe, Hailey shakes her head, emphatically exclaiming, ‘His life matters too, you know!’

Moreover, Tillman presents the American justice system as being broken beyond repair. In addition to highlighting the difficulties that witnesses to police brutality experience, The Hate U Give emphasises the perversity of the police force. Whilst the poignancy and horror of Khalil’s murder remain bitterly imprinted in our consciousness– even long after the film has finished– it is by no means presented as an exceptional case. As various black characters are stopped by the police, insulted, searched and pressed to the ground, we are plagued by the uncomfortable knowledge that Khalil’s fate is one that will be repeated, again and again. This certainty is made strikingly obvious in the film’s opening, in which Starr’s father is giving her and her step-brother ‘the talk’. ‘Don’t act mad, stay calm […] keep your hands out of your pockets […] on the dashboard.’ This is the list of things that Starr must remember when she is stopped by the police, because, as her father reminds her, it is not a question of if she will be pulled over, but when.

In addition to condemning police brutality and the various forms of racism that exist in society, The Hate U Give self-consciously foregrounds the role of art in activism. The film’s title is an allusion to T.H.U.G. L.I.F.E. (The Hate U Give Little Infants Fucks Everybody), a phrase coined by the iconic rapper Tupac Shakur to describe the toxic cycle of hatred fuelling a broken society. Illustrating the role of race within popular culture, music is used to demonstrate Starr’s code-switching. Whilst with her white friends, Starr listens to Taylor Swift, when she goes to parties in Garden Heights on the weekend, she dances to Travis Scott. Music artists are also used to illuminate the ideas and prejudices played on women of colour. When talking to her friends, Starr explains how she will go ‘Beyoncé’ on her boyfriend because he has been too forward with her. Seconds later, she confesses in a voice-over that she wishes she could go ‘Solange in an elevator’ on her boyfriend. This refers to Beyoncé’s darker-skinned sister, Solange Knowles, whose infamous elevator fight with Jay-Z at the 2014 Met Gala made headlines – further perpetuating the toxic myth of the ‘angry black woman’. It is not just Starr who uses music to address racial injustice; perhaps the most harrowing scenes of the film showcase Khalil’s relationship to music. Moments before his death, he and Starr listen to Tupac, discussing the role that his music has in the fight for racial equality. Later, in a chilling scene where Starr enters Khalil’s bedroom after his death, the camera lingers on Khalil’s walls, richly decorated with music posters. As we stare transfixed at posters of Kendrick Lamar, a figure who has repeatedly made issues of racial injustice a key focus of his music, we can’t help but think of the brutal irony that despite the popularity of his music, his lyrics apparently fall upon deaf ears.

Watching The Hate U Give won’t change the situation in America. It won’t magically reform a society based on systemic racism, whose very existence depends on structures implemented during slavery and racial segregation. It won’t change the fact that police brutality is one of the leading causes of death for black Americans, or that there are more black Americans in prison than at university. Most importantly, it won’t resurrect the millions of young black lives that were taken long before their time. Watching this film, however, can make you marginally more aware of just some elements of systemic racism and of the bias of our legal system. Educating yourself on these issues is the bare minimum that any ally to the black community can do. Through its evocative narrative and presentation of various attitudes towards Khalil’s murder, the film acts as a reminder of the difference between being non-racist and anti-racist. The Hate U Give provides us with two options: to continue to deny systemic racism and allow the vicious cycle of police brutality to exist, or to take action against injustice. Until the majority of people choose the latter, the harrowing statement of Khalil’s lawyer will continue to ring loud and clear: ‘Violence, brutality, it’s the same story, just a different name’.

Disclaimer: I wrote this article as an ally to the black community, not as a member of it. Whilst as a WOC I have some understanding of certain issues covered in this article, such as code-switching and microaggressions, the film is specifically about the racism, discrimination and prejudice to which the black community are subject. This is something that I will never fully understand or be qualified to talk about. In this review, I express my opinion of the film as an ally who is seeking to educate myself on issues of systemic racism and white supremacy. If, as a member of the black community you find anything in the article that I have said problematic or incorrect, please get in contact with SAVAGE so that any amendments and edits to the article can be made.

Whilst educating yourself on these issues is important, donations can go a long way in helping the Black Lives Matter movement. We’ve included links to several key funds which you can donate to support this very important cause:

The Hate U Give can be found on Amazon Prime on the following link https://www.amazon.co.uk/Hate-Give-George-Tillman-Jr/dp/B07J14791R