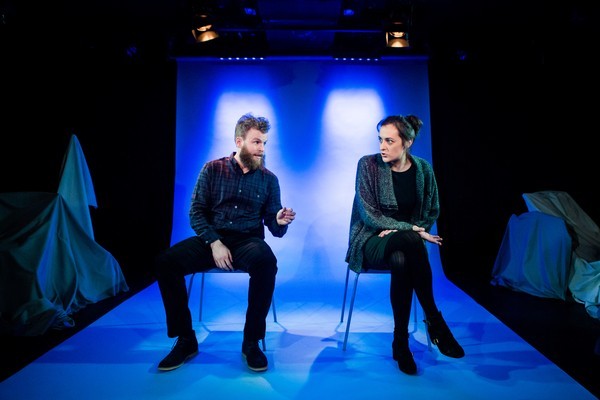 It’s not exactly easy, embarking upon a romantic relationship with no knowledge of one another’s language. But what happens when with the introduction of language, the relationship starts to deteriorate? This is the situation in which the Polish Lena (Izabella Urbanowicz) and Robbie (Tom Shepherd), her English husband, find themselves. We, the audience, collectively assume the role of the couples’ counsellor, before whom Lena and Robbie attempt to unravel the confused mess of their relationship.

The first fifteen minutes of this play are deliberately awkward, wrought with a self-consciousness befitting the situation of a couple reluctantly exposing the intimate difficulties of their life to a stranger. Their lines are disjointed and the interaction between the two characters is limited, but as they relax into the situation and begin to open up, the audience becomes steadily enlightened and enthralled by this unconventional and heart-warming love story.

A jumble of props at the front of the stage covered with dustsheets is gradually uncovered and strewn across the stage as we delve into the past and scrutinise the shared memories of this couple. By the end of the play, the acting space is a beautiful, messy visual metaphor for the disrepair and confusion of their grief-stricken life.

It would be all too easy for the audience’s sympathy to be directed entirely towards Urbanowicz, given that it is Lena who has to learn English and live away from her Polish family. However, Shepherd’s communication of Robbie’s insecurity and paranoia as he struggles to communicate with his bilingual son is tragic and compelling to watch. Andrew Muir’s script balances the struggles of both man and wife to demonstrate the extent of alienation in a multi-ethnic relationship, confronting the monolingual audience members with issues that they have probably never fully considered before.

Lena describes the silence that dominated the beginning of the couple’s relationship as ‘strong’. Now, she says, it is dead. This concept of silence impresses on the audience that this is not just a play about language but also a play about communication. Presented by the multi-ethnic counselling service Mothertongue, ‘The Session’ makes us think about language, something we very often take completely for granted, and its limitations, which we tend to overlook. This play moves from heart-warming fond memories to shocking revelations of grief and it speaks to everyone, no matter the language of their tongue.

‘The Session’ is showing at the Soho Theatre until the 28th November. For tickets and more information click here: http://www.sohotheatre.com/whats-on/the-session/