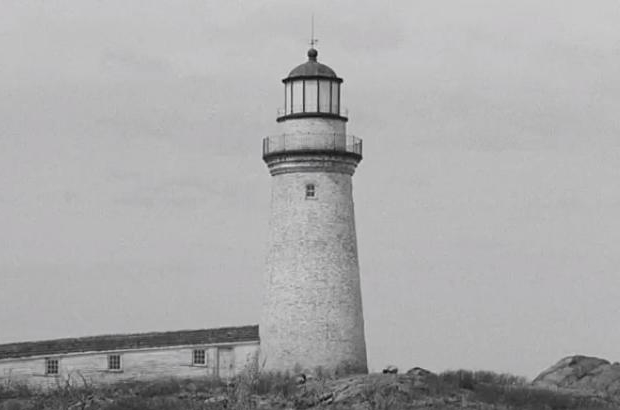 ANNABELLE BRAND explores Robert Eggers’ maritime horror, The Lighthouse, through an examination of the texts which influenced it.

‘A thousand thousand slimy things lived on—and so did I,’ recounts the titular sailor of Coleridge’s The Rime of the Ancient Mariner. The mariner’s curse would not be amiss if spoken into The Lighthouse. The claustrophobic new horror, directed by Robert Eggers, and co-written by Eggers and his brother Max, promises viewers an opportunity to hang up, if not their brains, then certainly their peace of mind, with their hats (or sou’westers) in the cloakroom. Tentacles, seabirds, mermaids and storms all ooze their way from the depths of the ocean into the psyche of both characters and audience, and cling there long after the credits have rolled. The horror of The Lighthouse is one of familiarity. The audience cannot help but recognise the shadowy influences of Eggers’ work from half-remembered history books, whispered bedtime stories and pulpy Lovecraftian horror. The ‘slimy things’ of The Lighthouse live on due to to lovingly breathe new life into the old tales he has collected and reworked into a weather-beaten and barnacle-encrusted nightmare.

‘The Rime of the Ancient Mariner’ is one of many of Eggers’ inspirations. Like the director’s previous horror, The Witch (2015), it crackles with intertextuality. For The Witch, set in 1630s New England, Eggers researched obsessively, to the point where he claimed to The LA Times that the film was ‘the most accurate portrayal of this period in American History on screen.’ Obsessive historical detail meant extensive reading—from records of old Massachusetts such as ‘The Diary of Samuel Sewall’, and ‘The Diary of John Winthrop,’ to old Elizabethan pamphlets on Witchcraft (the source of the unusual spelling of ‘The VVitch’ featured on theatrical posters).

The Lighthouse is no different. Its origin is a report which, like Eggers’ work, seems a chilling concoction of fact and fiction, known as the Smalls Lighthouse Tragedy. It took place in 1801, on a lighthouse situated on a group of rocks approximately 20 miles off the coast of Wales, manned by two men, both called Thomas. When Thomas Griffiths died in a freak accident, Thomas Howell built a coffin to hold the remains of his former partner and secured it to an outside shelf rather than throwing the corpse into the ocean and risking a murder charge. As storms swept the island, the coffin was opened and the arm of the exposed body was torn off, the winds dragging it in view of the window in an eerie ‘beckoning’. Understandably, the remaining Thomas was so traumatised by this incident that it led to a change in law, and lighthouses were henceforth manned by a team of three rather than two men. Perhaps this law would have saved Robert Pattinson and Willem Dafoe from the madness to which Eggers induces in their characters, but it would equally have robbed cinemagoers of a feast of dread maritime horror.

Two men, one older, one younger, are duty bound to man a desolate lighthouse off the coast of Maine for four weeks—the plot of The Lighthouse is deceptively simple. Eggers has joked in several interviews that ‘nothing good happens when two men are left alone in a giant phallus’, and The Lighthouse certainly leaves viewers with a powerful impression of male power dynamics stripped down to their bare bones. Pattinson plays the resentful and mysterious Ephraim Winslow opposite Dafoe’s Thomas Wake, a character who appears to be part socially inept, shuffling old man, and part terrifying sea-god. Upon arrival on the island, the more experienced Wake attempts to domineer and bully the younger Winslow into meek subservience. Physical exhaustion, the drinking of kerosene and sexual frustration impede his efforts to do so, and The Lighthouse is a bleak, fragmented record of this conflict.

The horrific starting point of the Smalls Lighthouse Tragedy conveys a backbone of bleak endurance that Eggers has made the centre of the film’s horror. The lighthouse must remain lit, and the unfolding events must be observed. In the one of the first shots of the film, Pattinson and Dafoe stare through the fourth wall and into the camera. Perhaps there is a team of three on the island after all—the third person who must endure the trials of the lighthouse is the viewer. The audience is trapped in a suffocating aspect ratio of 1.19:1 just as Dafoe and Pattinson are confined within the lighthouse itself, plunged into black and white as they are forced to eat their supper by the gloom of a solitary candle.

To supplement The Smalls Lighthouse Tragedy, Max Eggers, the film’s co-writer, looked to the grandfather of horror himself, Edgar Allen Poe. ‘The Light-House’ is an unfinished ghost story, cut short by the author’s death. Many authors had finished the tale in their own way before Max Eggers tried his hand at it, although, perhaps like Poe himself, the writer struggled and the project was stalled until after the production of 2015’s The Witch. Remnants of Poe’s original story still cling, barnacle-like, to The Lighthouse, despite Robert Eggers’ insistence that the film is not ‘a ghost story in a lighthouse’. An obsession with ‘insulation’ is one that Poe’s readers, like Eggers’ audience, are trapped within alongside the characters themselves. Another ‘monomania’ borrowed from Poe is an addiction to detail. As the character of Poe’s story dutifully writes down his experience, so does Willem Dafoe, as Wake, put on a par of round glasses and attempt to detail the minutiae of his cylindrical  prison.

Wake’s extensive note taking is rivalled only by Eggers’. The Smalls Lighthouse Tragedy and Poe’s unfinished tale are only two examples of Eggers’ extensive research of original sources. During a heated argument between Dafoe and Pattinson’s characters, Winslow accuses Wake : ‘I’m tired out of listening to your damned-fool yarns and your Cap’n Ahab horseshit—you sound like a goddamned parody.’ ‘Damned-fool yarns and Cap’n Ahab horseshit’ might be an accurate (if irreverent) way to view the construction of The Lighthouse. ‘Cap’n Ahab’ is there in the influence of Herman Melville (Moby Dick), rearing his head in Dafoe’s unpredictable, gloriously tyrannical raging. In order to properly construct such raging, blasted forth in Dafoe’s bass, Eggers, Dafoe and Pattinson listened to a crowd of different maritime voices. One particularly valuable resource came from a Maine author of the nineteenth century, Sarah Orne Jewett. In preparation for her novel, Deep Haven, Jewett had interviewed various sailors, recorded on paper in their regional accents. It was the ebbs and flows of these accents which steered Dafoe and Pattinson’s mesmerising performances.

As for the other ‘damned-fool yarns’ that twist together into the sailor’s ‘rope’ of The Lighthouse, they are numerous. Many of the film’s scenes recall the drama and mystery of the Symbolist art movement, such as the bizarre, darkly suggestive work of Sascha Schneider. There are flashes of the bizarre power-play of Beckett’s Waiting for Godot or Endgame. For cinema, there is the constant sense of madness erupting from within found in Apocalypse Now, set in the oppressive interior of Kubrick’s The Shining. Ancient Greek mythology also plays its part. Eggers draws on the myths of Prometheus, the trickster god punished for revealing the secret of fire to mankind by having an eagle eternally devour his liver, and Proteus, son of Poseidon, the classical Greek embodiment of the ocean’s changeability.

Some have claimed that this last, classical influence, ‘explains’ The Lighthouse. Pattison’s Ephraim Winslow is Prometheus, drawn from forbidden attraction to forbidden transgression. The unpredictable and tyrannical Wake is Proteus, old man of the sea. If there is one thing Eggers has demonstrated in The Lighthouse, however, it’s that a person’s true identity is rarely so easy to find. Furthermore, Eggers himself has admitted that Prometheus and Proteus do not feature side-by-side in any known myths, let alone in as close proximity as Eggers places Pattinson and Dafoe. Unlike Prometheus’ forbidden ambition, the obsession within The Lighthouse is rarely a sacrifice meant to benefit the whole of mankind. In other words, The Lighthouse is impossible to explain in reference to just one ‘damned-fool yarn’. Like a tangled fishing net (or perhaps an impenetrable lobster trap), the strands of narrative sources criss-cross and mesh together. It is truly a ‘yarn’, an embroidered and woven collection of myths, tropes and painstaking historical detail that Eggers has, as he puts it, ‘jammed together’.

In an interview with The LA Times, Robert Eggers confessed that ‘Guillermo del Toro is able to invent his worlds. I would find the pressure of having to invent crippling.’ In The Lighthouse, Robert and Max Eggers remind audiences that sometimes the best way to reach a new story is to return to several old ones. It is a film of endurance—endurance not just of the two men in the face of madness, but of the tales without which such madness would be inconceivable.