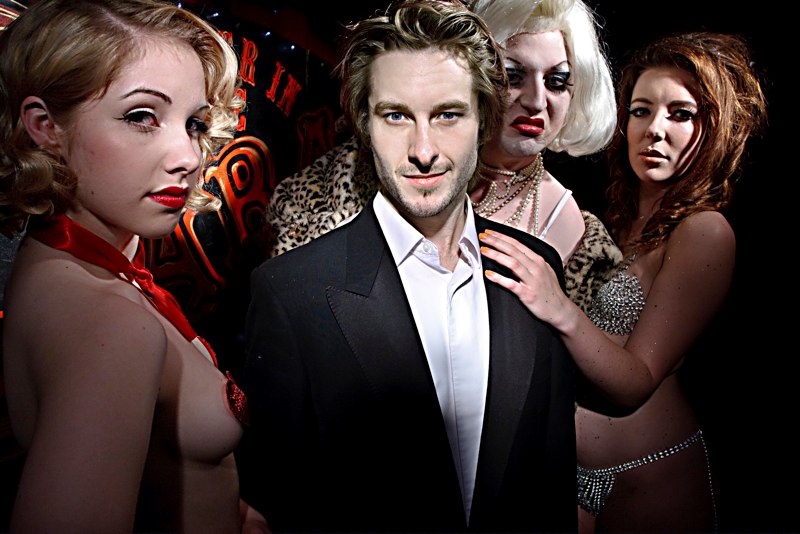 ‘You know the smell of the Underbelly in Edinburgh, the rotting, artistic smell, when you can simultaneously feel your clothes turning mouldy? That’s what we’re hoping for at The Vaults this year, although hopefully it won’t be quite as damp…’

Alex Parsonage, the charismatic, artistic director of the Mimetic Festival is enthusiastically telling me about his festival’s venue this year.

Winner of the Fringe Report Award for ‘Best Artistic Director’, founder of Finger in the Pie, an award-winning physical theatre company, and hater of cake (he reluctantly tries a crumb of raspberry muffin during our interview), Alex is putting on quite the show this November. The Mimetic Festival brings together performances of puppetry, magic, mime, cabaret, physical and visual theatre. As Alex explains to me, the festival gives him the chance to pull together a number of artistic visions so that they speak to each-other with an over-riding narrative. Of the 36 performances the Mimetic Festival is showing, SAVAGE is lucky enough to be covering nearly half and is thrilled to announce that the Mimetic Festival Awards will be assessed in association with SAVAGE, as one of their awards partners.

The festival’s wide variety of performances are not as disparate as you might think, Alex points out. Mime, physical theatre, cabaret, magic and puppetry have all evolved from the same roots, the ‘commedia dell’arte’, which was popular entertainment in the 15th Century. At the time there were two categories of theatre: low-end performances for the ‘commoners’ and high-end drama for the court. This ‘low’ drama gradually evolved into burlesque and other forms of physical entertainment.

The only other big celebration of such performances is the London Mime Festival, which showcases the international cream of the crop, leaving little room for emerging performers. The Mimetic Festival is an attempt to achieve this on a smaller level, with an emphasis on creating both a social and physical space for like-minded people.

Alex and Catia Ciarico (the in-house programmer) have worked tirelessly on their project for the last few months, alongside the event’s producer Flavia Fraser-Cannon, who is making their dream a reality. There is no conscious or deliberate desire to shock, says Alex of the more subversive performances, but at the same time none of it is apologetic. The passion behind the festival is to achieve something transportive, and the genius behind such acts is the suspension of disbelief: they allow audiences to hold two beliefs at the same time; the awareness of the world we live in beyond the theatre doors; and the theatre world behind the curtain.

For Alex, his organisers and performers, the magic of what they are doing is to show audiences that the world doesn’t have to have the rules it does – there is nothing abrasively didactic about any of the performances, but instead they offer an alternative perspective.

Burlesque, meanwhile is not necessarily supposed to be titillating. It’s interesting looking at the crowd who goes to those kind of performances, Alex contemplates, as we discuss whether burlesque can be reconciled with feminism: the audiences are largely made up of women, or couples who have been dragged there by the woman in the relationship, whilst her companion fidgets uncomfortably.

The development of third-wave feminism has made a big difference, as woman are keen to celebrate and reclaim their bodies, and cabaret is largely viewed as women’s entertainment for women, rather than a salacious spectacle. I can’t help thinking that as tenuous as this could sound, Alex has a point – I wouldn’t dream of going to a cabaret show with my boyfriend, but I’d eagerly go with all of my girl-friends in tow.

As well as collaborating a huge variety of physical theatre performances, the Mimetic Festival provides the chance to commend emerging performers for their work, and celebrate them publicly. The Mimetic Awards judge the performances for a number of very specific categories. This is important Alex explains, as the main currency of the industry is the respect of their peers. The awards are a way of acknowledging something inspiring, and giving it the recognition it deserves.

The festival also sponsors a performer each year, via the Mimetic Festival Bursary. This is decided by audience vote before the line-up has been finalised. Each candidate submits a video of the performance they want to do, and the public is invited to vote for what they would most like to see brought to the stage. This year the bursary award has gone to Michael Twaits for his performance ‘The Libertine Has Left The Building’.

Giving performers such opportunities is of great importance to the spirit of the festival. Alex tells me the story of Alex Luttley, who applied to the Mimetic Festival last year with a charmingly rough-around-the-edges five minute presentation. He hadn’t put anything else together, but they spotted something exciting there and offered him a slot – he went on to win ‘The Spirit of the Fringe’ Award. If we hadn’t given him the chance to put on his performance he wouldn’t have done it at all, Alex says proudly. Alex Luttley is back again this year, hosting the bar and organising the walk-about performers.

The dream is to be at the stage where there are companies who exist because people met each other through the Mimetic Festival. In the long-term, there are hopes that the Mimetic Festival will be cemented as the hub for European physical theatre makers, where you can meet your peers to make contacts, grow as artists, and showcase your work.

The Mimetic Festival already has links with three physical theatre schools. Ideally, as they secure more funding, the festival will be able to secure theatre companies from abroad, who otherwise couldn’t afford the expense of travelling, resulting in more international theatre in London so as to create an inter-country dialogue.

I have every faith that Alex and his team will succeed in their mission, and will be laughing most of the way there.

The Mimetic Festival is taking place at The Vaults in Waterloo, between the 18th – 29th November. For more information, please click HERE