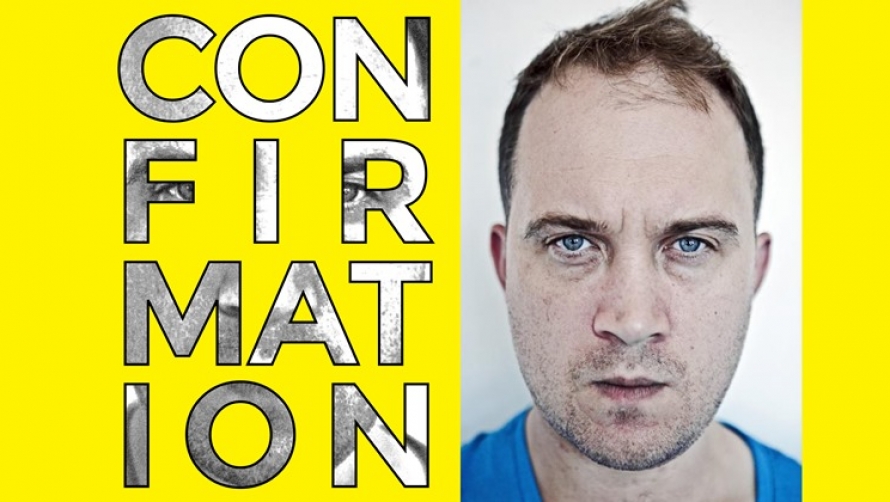 Winner of a Scotsman Fringe First Award, Confirmation has now been transferred to the Battersea Arts Centre after a successful run at this summer’s Edinburgh Fringe Festival. Written and performed by Chris Thorpe and directed by Rachel Chavkin, the play explores the psychological phenomenon of ‘confirmation bias’: a cognitive prejudice in which the individual disregards fact and people who challenge their own beliefs.

Thorpe eases you into the subject matter with an embarrassing anecdote about being forced to take the tube with ‘John’, an overzealous BNP supporter. At first the play seems to fit quite comfortably into ‘Louis Theroux documentary’ territory, inviting the audience to point and laugh at John and his local BNP branch. It then moves on to simple psychological tests, entailing the demonstration of ‘confirmation bias’ in various members of the audience. He explains that, because this psychology curtails disagreements between individuals of a population, it has ensured the longevity of the human species by reducing conflict amongst our ancestors.

This all sounds a little dry and academic; as though Thorpe is a psychology lecturer moonlighting as an actor, yet his delivery is mesmerizing. When he suggests that John is ‘quite obviously not a well man’, the audience agree unquestioningly having been unwittingly coaxed by their own ‘confirmation bias’, as Thorpe intends to expose. This may seem harmless enough; in fact, the assumptions we make about people and their beliefs save us the time and effort of having to actually ask them, but ‘confirmation bias’ has its drawbacks too.

Thorpe explains how he began to research the gulfs can cause in society, beginning with how we dismiss people as unintelligent if we disagree with their opinion, rather than allow the person to be complex or nuanced. To try and understand this idea, he sets up a dialogue with ‘Glenn’, a British man who runs a popular white supremacist website. Through Thorpe’s reenactment of the real conversations he had with Glenn, the audience is forced to confront the uncomfortable truth alongside him: Glenn is actually an intelligent and thoughtful person. Although Thorpe and the audience detest his beliefs, we have to acknowledge that they are just as important and true for him as ours are to us.

Confirmation is a brilliant play because it challenges the mindset of the average modern theatre audience—often stereotyped as, let’s face it, being white, middle class and left wing—without being at all ‘preachy’ or overbearing. Thorpe, speaking Glenn’s words, exposes the audience as ‘fucking liberals; constantly seeing apology where it is not needed’, leaving us to question our own ways of thinking and entire system of beliefs.

Despite working in Edinburgh in August at the venue hosting the play and consequently seeing the production a total of eight times, it continued to blow me away every performance. Thorpe’s relentless energy and staggering intellectual leaps are exhausting yet exhilarating. It’s the truly exceptional type of play that lingers in your mind for days afterwards: a rare piece of art that changes the way you think about the world.

Confirmation is showing until the 25th October – for more information and tickets, please click HERE