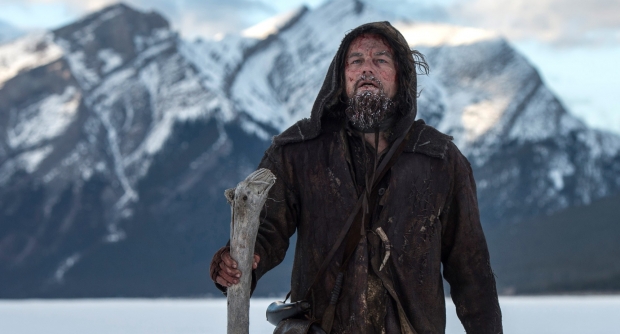 Alejandro G. Iñárritu’s new film is a sensory wonder, but one which ultimately sacrifices substance in favour of style.

Set in the 1800s and based on true events detailed in a novel by Michael Punke, The Revenant focuses on the miraculous survival of fur trapper Hugh Glass (Leonardo DiCaprio) in the hostile wilderness of North America. After being mauled by a grizzly bear and witnessing the murder of his son, Glass drags himself (quite literally) back from the dead in order to settle the score with his black-hearted nemesis John Fitzgerald (Tom Hardy).

One of the main triumphs of this film is the beautifully orchestrated cinematography from Emmanuel Lubezki. In a blood-pumping opening sequence, the action explodes out of the screen with a terrifying cacophony of flying arrows and cracking bones. Lubezki ensures that the camera is at the centre of the chaos with a sublime Steadicam shot resembling his unforgettable work on Iñárritu’s previous film, Birdman.

Even more impressive is the execution of the later bear attack, a scene so savage that it would be unwatchable if it weren’t so gripping. The clawing, panting and spitting of this man-versus-beast struggle is shot in excruciating detail. At times, splotches of blood and clouds of breath hit the lens in a way that would normally jolt the viewer out of the film. Instead, these deliberate ‘mistakes’ make The Revenant utterly present.

DiCaprio’s performance is an extraordinary feat of endurance, especially considering the very real challenges of the ‘living hell’ shoot. Whether he’s biting into raw flesh, taking shelter in the carcass of a dead horse or simply hobbling towards the next obstacle, everything is done with total conviction. He pours physicality into the role, in a way that’s surprisingly reminiscent of the outrageously funny scene in The Wolf Of Wall Street in which DiCaprio crawls to his car like a drugged-up baby.

The Revenant also boasts an impressive supporting cast. Hardy’s remarkable portrayal of Fitzgerald is unblinking in every sense of the word while Domhnall Gleeson strikes the right chord as Captain Henry. A surprise triumph is Will Poulter’s performance as Jim Bridger, a conflicted youngster who is mistakenly drawn into treachery.

According to Iñárritu, The Revenant is a ‘spiritual drama,’ which transcends the stereotypes of a classic revenge western. The film does indeed explore the hollowness of revenge in a nuanced way but ultimately it lacks emotional impact, which could have elevated it beyond the immediate thrill of watching it. It is visceral, tense and visually breathtaking but the characters are thinly written and the story lacks depth.

This is most obvious in the underdevelopment of the relationship between Glass and his son Hawk (Forrest Goodluck). The story is punctuated with (slightly excessively) poetic flashbacks and hallucinations of his wife and son, which attempt to imbue Glass’s plight with more meaning but ultimately fail to do so. The film also becomes rather episodic during its middle act. Glass overcomes a series of obstacles, which are increasingly superfluous to the plot and don’t succeed in making his character any more sympathetic. The Revenant is full of pure cinematic brilliance but it neglects character development and could do with more genuinely affecting moments.

One of the few scenes with actual poignancy and feeling comes about halfway through when Glass encounters an Indian whose family have also been murdered. For a short while the pair sit together catching snowflakes on their tongues and laughing. This illustration of shared humanity is exactly what the film otherwise overlooks. Iñárritu wanted to make a statement about the human spirit, but ultimately, the film misses the mark because it focuses on the art of the image and you never quite connect to the characters beyond that. However much torment Glass suffers, The Revenant is so cold-hearted that you never really care.