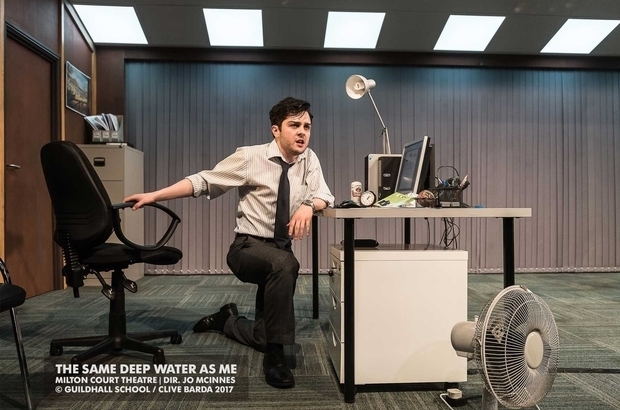 COLETTE ALLEN and ISABEL WEBB review Guildhall School’s production of The Same Deep Water as Me.

Nick Payne’s The Same Deep Water as Me tackles issues of morality, trust and personal history within the modest Luton-based office of a two-man personal injury firm, ‘Scorpion Claims’. The set and scenario are simple: aspiring solicitor Andrew (Martin Quinn) is reluctantly reacquainted with his working class upbringing through his old friend Kevin’s (Jacob Coleman) scheme to join the underworld of fraudulent claims. Despite the cluttered desks on stage, there is ample room for the actors to indulge in the quick-fire banter that fuels Payne’s sharp observations about social class and the workplace.

The Guildhall School’s final year students were set the task of striking a fine balance between comedy and reality. There are several brilliant moments in this social comedy where the subtlety and reflectiveness of Payne’s writing shine through. In particular, Barry’s (Jake Burgum) pride in his collection of exotic teas – at one point, he draws out an array of Twinings’ Special Infusions – powerfully encapsulates his desire to get ahead. Andrew and Barry are both good, hard-working local boys. Kevin is more rough around the edges,  with his fuck-boy haircut and his constant teasing of Barry and his tea (“Barry? With the tea? Barry-with-the-tea!”). Yet as Payne’s title suggests, all these characters spring from the same pool, and they all eventually land in the same deep water, tainted by the manipulation involved in their fraud.

Amelia Strohm’s performance is a particular stand-out. She perfectly captures Jennifer’s limbo between the two men in her life, Andrew and Kevin. Building a life with Andrew may have provided the opportunity for her to move forward. The regret she feels for choosing Kevin – a man who does all he can to remain back in school with the likes of ‘Karate John’ – is exquisite. Whereas Jennifer has a taste for Japanese popcorn-infused green tea, Kevin has committed to the builders’ brew.

But Guildhall didn’t always quite grasp the subtlety of the task at hand. Small inconsistencies like the questionable Luton accents, or Judge Jessup (Caleb Roberts) seeming far too young for the anecdotes he pontificates, can be excused by the understanding that these are students. The small-fry fraudsters, armed with cheap coffee from Greggs, taking on Tesco’s caramel Frappuccino-drinking “ball-buster” lawyer was a neat point (and credit is certainly due to their costume designer Jane Hankin). But then they explicitly point this out – ‘this is a caramel Frappuccino’, ‘have you ever been to Greggs?’ – and the sophisticated high-street café comparison is ruined. Payne’s script is partly to blame here, but the overemphasis put on the lines by the actors themselves doesn’t help. These small discrepancies grow into more fundamental holes in the plot. The underdevelopment of Andrew’s relationship with his dad, as well as Kevin’s unexplained past with Barry, become somewhat frustrating. Quinn and Coleman should have put more emphasis on making the relevance of these subplots clear, rather than how their characters are supposed to get their caffeine hit. 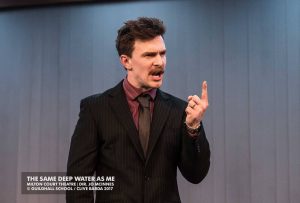 Some potentially interesting directorial choices prove more distracting  than illuminating. There is an atypically heavy presence of the stage crew, which are used to represent the class conflict the production deals with. The removal of the back wall exposes the inner workings of theatre in a way that seems to mimic the clumsy cover-up of the fraudulent claim in the play. But the message is not clear enough: to attempt to construct an interpretation around these aspects feels bizarre, if not desperate. Though the haphazard nature seemed to be part of the intended effect, this may have been the production’s undoing.

The impact of the play’s realism rests on language: a stark contrast between Kevin and Andrew’s slangy banter and the starched technical formalities of the courtroom is all the audience needs to appreciate Payne’s scabrous social commentary. But director Jo McInnes’s additions to Payne’s script confuse and detract from his words, which should remain the prime focus of the audience as well as the actor. Green tea has its perks, but sometimes you just want a simple brew.