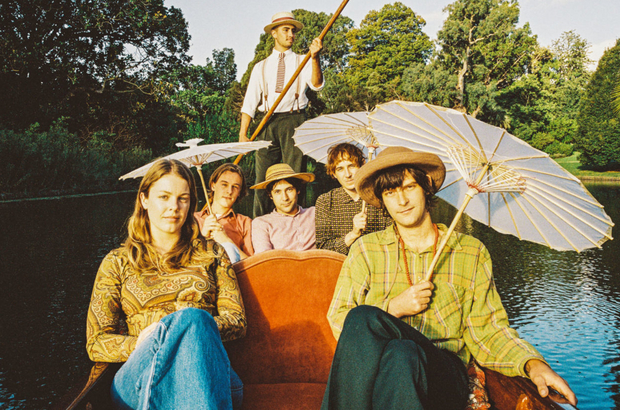 Australia has produced some of my favourite bands in recent years – King Gizzard & the Lizard Wizard, Tame Impala, and the Psychedelic Porn Crumpets to name a few – and now Bananagun has arrived to join them with The True Story of Bananagun. This is the funky, genre-bending debut album from the Melbourne-based five-piece, released in June of this year. Their name, both whimsical and meaningful, is self-described by band founder Nick van Bakel as ‘like non-violent combat’. Like an image of a child playing cowboy out of a fruit bowl, it suggests play, and a desire to not take things too seriously. Of course, Bananagun are no children, as their debut shows, they are just having fun – a word which I think is central to the whole album.

I stumbled across Bananagun a few months ago on my local record shop’s Spotify playlist, with their single People Talk Too Much – which is featured on the album – and loved their blending of classic Afrobeat with their own modern sound. The track really epitomises their style, with an irresistible bassline and great riffs. True Story is a great expansion of the funky, almost psychedelic sound of that single, and came as a very welcome lockdown surprise.

The genre of the album wavers between psychedelia and Afrobeat, with some of their own funky rhythms thrown in – but I think the best way to describe Bananagun’s sound is just plain groovy. There is definitely a strong 60s/70s vibe, but the band’s vibrancy and liveliness brings it directly into 2020. With the golden combination of Aussies, flutes, and the feeling of summer, the album is something like King Gizzard’s Paper Maché Dream Balloon on funky steroids – especially Perfect Stranger. ‘We wanted it to be vibrant, colourful and have depth like the jungle,’ van Bakel says – and I think they succeed. If any track demonstrates this best, it is quite aptly the opening track, Bang Go the Bongos, which fuses harmonies, ecstatic bass and drum lines, and the occasional random squeak. True Story captures the exoticism of the jungle near Melbourne, and transmutes it through modern psychedelia, to create a seriously fresh sound that is not easily defined.

The lyrics are very much secondary to the overwhelming drive of the instrumentals, with almost every song featuring an energetic solo groove, highlighting the superb talent of these individuals. That is not to say that the lyrics are in any way lacking. Indeed, when delivered with such sweet harmonies, their fun and whimsy really shine through. It is easy to get lost in the great instrumentals of the album without even acknowledging the content of the lyrics, but they do explore some serious topics – most prominently with the gender identity questions posed in She Now. Equally, some of the songs are just enough nonsense to really make the album that little bit more quirky.

On first looking at the track-list, I thought that Bird Up! was just a subtle nod to one of Eric André’s wackier sketches– but no, there were actual birds in it! It is a fun little interlude of drums layered with bird noises – definitely not the ‘worst show on television’ with which it shares a name. It is certainly nice to have a tropical rest-break in the middle of an almost unrelenting stream of strong, funky instrumentals (in a good way!). Bananagun strike a near-perfect amount of variety in styles within the album, demonstrated in part by their use of the birds of the Melbourne jungle as the vocals for an entire track.

The first half of the album feels the strongest, as after the bird interlude the songs mellow out a bit, drifting into some blues-y territory before getting the funky momentum back. Still, overall, Bananagun has produced an exciting and sophisticated debut. My favourites are probably The Master and Out of Reach, with a special mention for People Talk Too Much which I was already in love with. I will be keeping an eye on this band in the future, but for now I am glad for a groovy injection to my summer listening.

The True Story of Bananagun was released on Full Time Hobby on 26th June 2020.