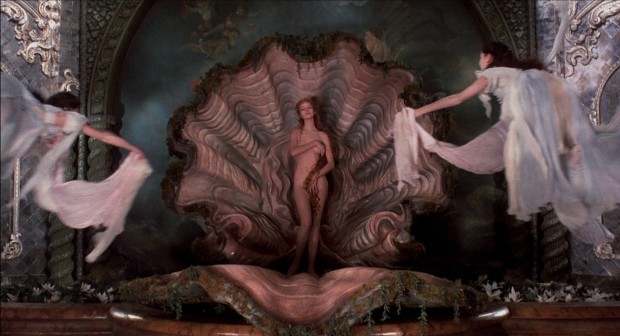 The V&A’s current exhibition Botticelli Reimagined begins in darkness. A projector beams footage of a sleeping Sean Connery (taken from Dr No.) onto the wall. “Bond girl” Ursula Andress is shown emerging from the ocean. Water ripples against her body; she is clad in that iconic white bikini and clutches a conch shell. Connery, now awake, observes this modern Venus from behind a tree. Like Connery the viewer is immediately thrust into implicit voyeurism. The reimagination of Venus by the James Bond franchise is immediately followed by another cinematic example. In Terry Gilliam’s The Adventures of Baron Muchausen a young Uma Thurman is a more overt example of a cinematic reinterpretation of the goddess. In both cases the women appear in open direct light whilst the men are in the shadows. It is strongly suggested in both scenes that the men in question are distinctly earthly, and this is sharply contrasted to the deification of the female characters. The viewer becomes a voyeur of the male voyeurs, and both lust after these iconic female bodies. However, it is not necessarily the individual women who are the subject of our desire, but the Venus figure that both bodies evoke. Venus is an intangible, explicitly sexual goddess very far removed from our own corporeal reality. This is an exhibition that seeks to address a hunger to recapture and represent anew the beauty of Botticelli’s Venus.

The first room gathers together 20th century appropriations of Botticelli’s iconic image. The glossy black floor of the space preempts modern obsessions with surface and aesthetic. In their responses to Venus the artists use the goddess as a means through which to question current conceptions of beauty. The Reincarnation of Saint–Orlan sees notorious performance artist ORLAN aiming to deconstruct traditional European ideals of beauty by reconstructing her own face in accordance to them. This is achieved through a performance piece involving plastic surgery, and results in the artist having the forehead of Mona Lisa and the chin of Venus. For ORLAN the knife of the plastic surgeon acquires the same divine power as the hand of the artist. Warhol too responds to Botticelli with facial reconstruction; he repeats and flattens Venus’ face until she becomes the one dimensional sister of Marilyn Monroe. Does Warhol reaffirm Venus’ status as an icon or lower the goddess into the fleeting world of celebrity and “trash” culture?

After an exceptionally courageous opening the exhibition suddenly shifts. We leave the flashy world of consumerism and enter a narrow room with a dusty blue carpet where a host of Victorian artists pay homage to Botticelli. His lyrical humanism, classical scholarship and floral motifs ensure it is easy to identify Botticelli’s influence on the Pre–Raphaelite Brotherhood. The inclusion of Morris, Ruskin and Rossetti, as well as the emphasis on the Victorian rediscovery of Botticelli, firmly roots the exhibition in the origins of the V&A. There is the same melancholic sexuality in Botticelli’s women as in the vacant stare of the Victorian models; they are docile and drugged on love with parted lips and wild untamed hair. They stare out of the canvas and past the gaze of the viewer, elusive, wistful and lost in thought.

The narrow room housing the Victorian collection feels like a corridor leading the viewer towards the real reason for the exhibition: a mass of paintings by Botticelli in a crisply lit white space. However, this excess of the old master – the largest collection of Botticelli in the UK – becomes something almost sinister. It is not an entirely joyous celebration of his works. In every painting we see the same cloned face of the Genoese beauty Simonetta Vespucci. There is a haunting and obsessive repetition of this muse in the collected works of Botticelli; she is a Renaissance cyborg. There is no doubt that Botticelli’s works are magnificent and that they retain an emotional complexity. Yet, there is a plasticity to the skin of Botticelli’s women; the Virgin Mary has the same face as Venus, almost as if Botticelli has had the former undergo the same surgical procedures as ORLAN. This repetition on Botticelli’s part is explicitly explored by ORLAN in Virgin to Venus Striptease. Viewing works by Botticelli after a journey through the many modern reinterpretations of Venus entirely changes the eventual perception and understanding of his original works.

Yet as we approach the last room of the exhibition, we are not met with the figure around which we have been coyly skirting: Botticelli’s The Birth of Venus, which remains in the Uffizi gallery in Florence. Instead two preliminary studies for the final image are placed together. Even the original Venus was preceded by copies. Her eyelids are heavy, she is stripped of everything, only the curves of her body remain and are placed against a black nothingness. The preliminary Venus resembles two flattened Andy Warhol screen-prints. This sense of repetition and copying extends beyond the exhibition; walking into the gift shop I couldn’t help but feel it could have been incorporated into the exhibition. The products on sale were simply more reinterpretations and representations of Venus. A Botticelli beach towel anyone?

The arrangement of the exhibition is intriguing. The first room is bold, trashy, and decidedly kitsch. This is followed by the comfortable conventionality of the Pre–Raphaelites. The exhibition’s rooms share no discernible common-ground despite their concern with Venus– we are never given a grand reveal. The exhibition goer is shown fragments of Venus and can never piece together a holistic answer as to why the goddess inspires such awe. The forceful repetition of one image feels shallow, dislocated and alienating. This sounds negative, yet perhaps Botticelli Reimagined belies a very brave and thoroughly modern curation? The exhibition raises questions and serves up inconclusive repetitions. There is only one conclusion: ineffable and eternally sexy, Venus is the ultimate tease!

‘Botticelli Reimagined’ is on now until Sunday 3rd July at the Victoria and Albert Museum. For tickets and more information visit: https://www.vam.ac.uk/exhibitions/botticelli-reimagined