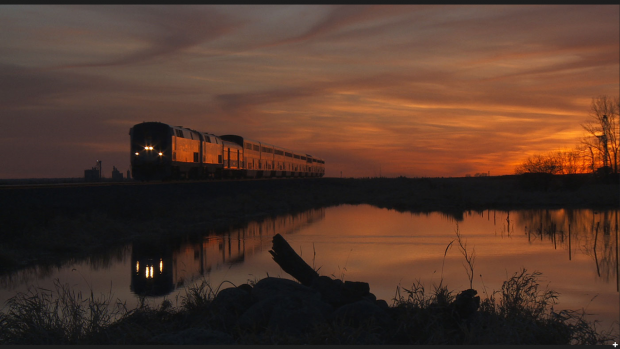 In Transit, to its credit, really does make you feel like you’re there. Imagine being stuck on a train for three days, forced to listen to the glib philosophies and ‘journeys’ that all of your fellow passengers tell you about. In Transit is a documentary that gives you an all-access pass to the Amtrak ‘Empire Builder’, an inter-state train that chugs through the heart of the American mainland.

In Transit, again to its credit, is a perfectly functional documentary. Though the colours are often slightly dull and I was left with the feeling that the photography wasn’t doing the landscapes justice, this is a solid piece of reporting. Yet the subject itself isn’t particularly riveting. Normal people, as it turns out, aren’t interesting for the most part. The average joe doesn’t have too much to say. If I’m on a train, to pass the time, I do like to eavesdrop on other passengers. But it’s not something I’d choose to do in my spare time.

I’d happily recommend In Transit as a ‘watch if you happen to be doing a research project on trains in the American Midwest’. If your dissertation is on ‘the attempted spiritual transformation of American normal-tons aboard a crude metaphor for life-as-a-journey’ or ‘a meta-thesis attempting to link the author’s inexplicable interest in trains, with an absurd obsession with Anoraks’, then the film may be for you. Otherwise, In Transit is little more than a cultural artefact with little entertainment value. There is, unfortunately, not too many hidden secrets of watching bored people on trains.

Though, as many of the people in In Transit seem very eager to tell me, life is a journey, I couldn’t help but thinking about the film’s destination. There is no real structure to In Transit. Occasionally, some people get on the train, but later they always get off and then perhaps some new people get on. Usually the people talk to one another, usually about themselves. Occasionally they get drunk and look silly which is fun, but then they also tend to play guitars and talk loudly, again about themselves, which is less fun. But, apart from this, there’s very little linking the scenes together apart from an audience’s presumed interest in humanity. This is something that’s undeniably pleasant to see, but In Transit never captures any extremes of emotion, or anything dramatically out of the ordinary.

In a sense, then, my main gripe about In Transit is that it’s too mild to be worth a watch in and of itself. Without an interest in the topic, this is not a masterpiece of storytelling, or photography. Instead it stands as a reference point in American infrastructure history, something to be pleasantly dug up in a time-capsule in 50 years or so.

‘In Transit’ is showing at the Open City Documentary Festival at 20.30pm on Saturday 25th June at Regent Street Cinema.