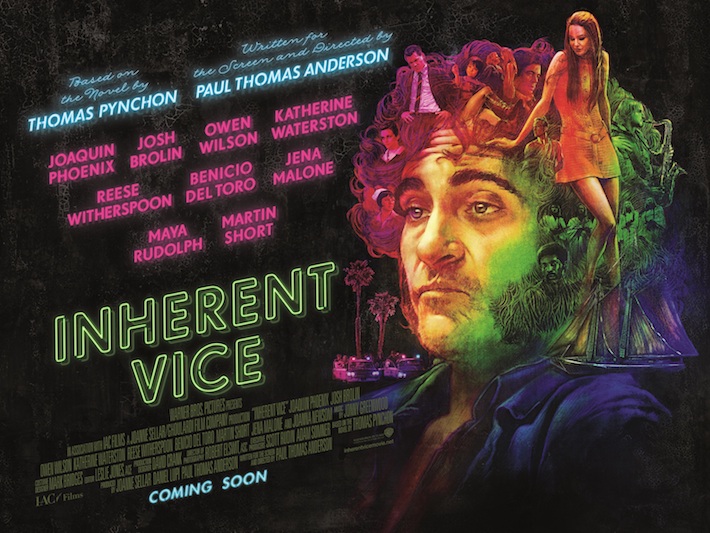 Paul Thomas Anderson’s latest release Inherent Vice has been identified by cinemagoers as 2015’s mustn’t-see experience. Despite wide critical praise, Anderson’s adaptation of Thomas Pynchon’s 2009 postmodern novel has prompted an exceptionally high rate of cinema walkouts, leaving viewers baffled, disorientated, and ranting on social media. ‘Walked out’ is the second listed twitter search for #InherentVice, with reports of nearly half of audiences leaving the cinema before the film’s end.

It is unfair that this ‘walkout’ phenomenon is clouding the reception of what is ultimately a brilliant film. Those who left prematurely missed Anderson’s skilful portrayal of hazy 1970s California; Inherent Vice is a hallucinogenic series of disjointed scenes, artfully spliced into a blurry amalgamation of excellent cinema. The plot is indeed difficult to follow, and its fluidity appears to be the biggest problem for viewers. There are none of the traditional markers of beginning, middle and end, nor is there clear resolution of plot. It is unpredictable and playful.

Evidently, modern cinema audiences don’t cope well with the unpredictable. We are in an age of comfortable technology; everything is explained, broken down, given a handbook. The modern audience is used to control, the ability to satisfy curiosity at the click of the button. Watching films at home, this sense of authority is optimised: we can pause to google an actor’s name, enable subtitles for tricky dialogue, or stop halfway through and resume viewing at our leisure. In short, we dictate our viewing experience. In the cinema, we momentarily gift that control to the medium of film. We are submerged in a world in which the writer, director and cast reign supreme; the agency that 21st century technology has afforded us is lost. Sure, prior to taking our seats we can frantically look up the plot on Wikipedia, watch the trailer and read the reviews, as many inevitably do. But once within the confines of the cinema, the control we rely on in the outside world is absent. The audience is left in the dark in more ways than one.

By the very fact that the cinema environment rejects 21st century control, our smartphone authority is rendered useless in light of film experience. Without devoting our concentration to a film in full, without leaving behind our penchant for bite-sized information, we cannot gauge our response. There’s no app to explain how a film is meant to make us feel or how it resolves itself in our own minds. Anderson’s Inherent Vice has a high ‘walkout’ rate because this feeling of limbo runs beneath the film from its beginning. We never really know what’s going on. This lack of validation continues even after the credits roll: an uncomfortable position for a generation used to instant affirmation.

But this is part of the appeal of Inherent Vice. It is supposed to be confusing; Pynchon meant to create something that is difficult to compartmentalise, and Anderson does well to portray this. It is simply that we, as viewers, are not used to watching something that isn’t presented in a neat box, tied with the red ribbon of resolution – the absence of which seems so disconcerting for the modern viewer. In resisting this structural cinematic convention, Anderson has deliberately challenged his audience and their perception of modern film. Even the trailer for Inherent Vice, edited by Anderson himself, plays with this attempt to categorise. The film is almost deliberately mis-sold as another drug-fuelled slapstick comedy, replete with the archetypal loveable stoner and a token appearance from Owen Wilson. It’s almost as if Anderson has published a practical joke, which the audience is only in on if they ‘get’ the film’s aversion to more conventional genres.

Anderson has ultimately maintained the same fluidity of narrative that Pynchon’s prose explored six years ago, and in doing so has brought to light some home truths for the modern viewer. Our inability to handle the unpredictable is both a blessing and a curse for future film direction. It can be an opportunity for playfulness, for the creation of a cultural talking point and a cult following. Anderson may well have picked the perfect adaptation through which to challenge our preference for perfect resolution. But Inherent Vice also exposes our modern reliance on controlled experience, our penchant for digestible creativity. Perhaps it’s time we recognised that the instant affirmation of modern technology is destined to be at odds with the world of cinema.

This article was included as part of SAVAGE’s first print edition, Spring 2015.