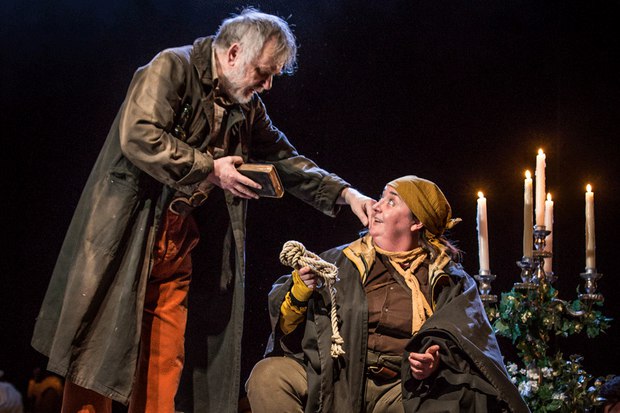 Caryl Churchill’s newly adapted play ‘Light Shining in Buckinghamshire’ provides a pocket-history of England’s Civil War. From the moment that Charles I takes to the throne in 1626 to the Restoration of the monarchy in 1660, the play consists of snapshots from within this turbulent period of unrest. The scenes follow a chronological progression, but without a crossover of character: each scene exists in isolation.

In regards to the plot, a member of the audience may look no further than an encyclopaedia of British history in order to enrich their view of the play’s historical backdrop and provide a context to the dialogue. It is a play devoid of a strong plot current and is reliant upon impressionistic phases of the Civil War which encapsulates much of the drama through allusion to memorable historical events. Without recurrent characters there is a lack of cohesion between scenes when moving from one group of radicals (the Levellers, the Diggers and, finally, the Ranters) to the next. Yet, the doubling of actors encourages the connecting of these periodic glimpses into history to form an impression of the cyclical nature of politics and public opinion: history repeats itself. The plot – if there is indeed one at all – becomes one driven by a concatenation of motifs and themes with a scattering of biblical allusions: a continual reminder of the religious preoccupation of the seventeenth century.

‘Original sin’ (mankind’s sufferance of pain in retribution for the disobedience of Adam and Eve) is confronted episodically with the change of social and religious attitudes making for a challenging discussion and opening up the possibility for bawdy humour. Any feminists in the audience will be fighting the urge to jump out of their seats as gender inequality is the order of the day – although Churchill does give voice to the subservient female, albeit to bemoan their woes or obediently accept their suppression under patriarchal rule. At times the dialogue defiantly enters the realm of blasphemy, with the sin of sexuality becoming a theme running between scenes. The witty sparks fly at the turn of a nonchalant word; the incongruity of slang language and the casual use of profanities during profound religious discussion draws laughter from its sheer ridiculousness.

Joshua James deftly reworks Churchill’s dialogue into a fast-paced and amusingly blasé delivery. Even when not under the (very literal) spotlight, James’ performance stands out amongst an extraordinarily large, sixty-two member cast. The Lyttelton stage appears to be a flurry of activity during scene transitions with the enormous cast flooding the stage and filling the auditorium with hauntingly liturgical vocals. Es Devlin’s set design is a feat of visual genius. A large banquet table, like Lewis Carroll’s Mad Hatter’s tea party, occupies the majority of the stage with the mute figure of Charles I at its head. On all sides sit the monarch’s council, a constant presence that, once removed at the onset of warfare, exacerbates the sparseness of the stage and enhances the near silent allusion made to king’s eventual execution. In the second act after an overly-egged removal of floorboards, the stage becomes land to be tilled – an interesting use of the space that aids in communicating the shortage of food resulting from the hotly contested ownership of land. 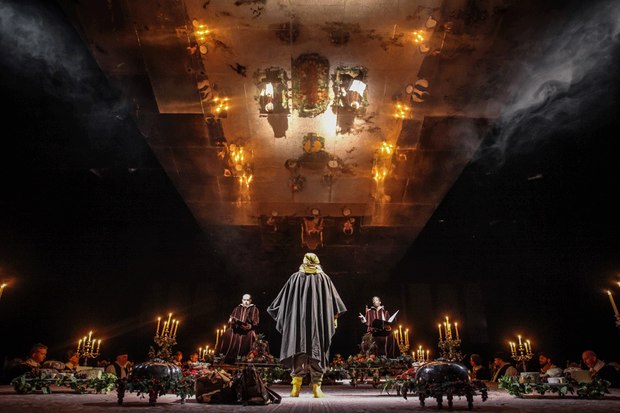 Lighting Director Bruno Poet’s contribution to the production is invaluable and – excuse the pun – sheds new light on the play. Much of the grandeur of the staging is a result of accurately timed lighting effects that bring attention to the peripheral details missed without a visual aid. During the most provocative scenes, the Putney Debates of 1647, the slight illumination of the audience reinforces the metadrama that is prevalent in this production. Although this superficial interaction with the auditorium is a little overdone by the actors’ frequent direct address of the audience through the fourth wall, the soft lighting aids in circumventing the cliché with a heightened sense of inclusivity. During the Debates, Daniel Flynn’s Oliver Cromwell also avoids the hackneyed stereotype through a modernisation of body language: he remains self-assuredly imposing and confidant in his stance without the cockiness often associated with the soon-to-be Lord Protector. Leo Bill’s Ireton is transfixing in his feisty stubbornness, breaking up the otherwise tedious and rather clunky progression (the dates being announced by an actor after a brief swapping of seats) of the debates at intervals through the year.

It is a production with flaws, but is worth a watch for its visual magnificence and a smattering of lively performances. Brush up on your history and it will be a play of much greater significance; a nuanced portrayal of historical events focusing on the little people within the chaos of a nation at war with itself.

‘Light Shining in Buckinghamshire’ runs until 22nd June. For more information visit: http://www.nationaltheatre.org.uk/shows/light-shining-in-buckinghamshire or call the box office on: 020-7452 3000.