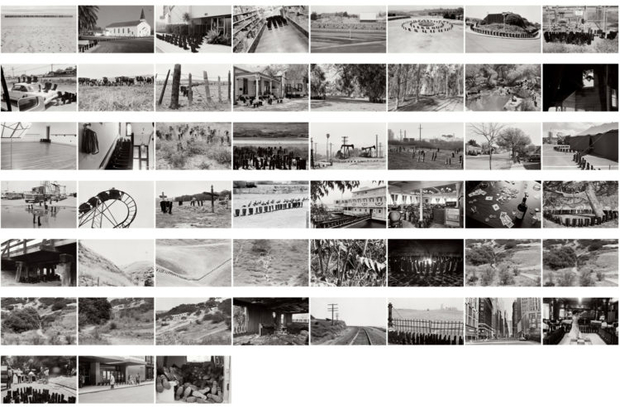 GEORGIA GOOD explores the value and purpose of postcards, and how they relate to the world.

This objet d’art, pictured below, is a postcard. By its very existence, it affirms its own message. Simon Cutts’ letterpress work, The World Exists To Be Put On A Postcard, literally makes a statement: it expresses an idea, intellectually and aesthetically, about the nature and purpose of its chosen form. Cutts has long been preoccupied with postcards. Playful and provoking, another of his works proclaims ‘THE POSTCARD IS A PUBLIC WORK OF ART’, while another offers instructions ‘to climb through a hole in a postcard’. His postcards consciously engage the viewer. If you were to take one home, you wouldn’t have a replica: you’d have an original, blue-tacked to your wall.

Generally, postcards are copies of other works of art, reduced to 10x15cm and reproduced in bulk. Yet Cutts presents postcards as an art form in their own right, though conscious of their reproducibility. His words echo the sentiment of Susan Sontag’s On Photography: ‘today everything exists to end in a photograph’. For Sontag, the ubiquity of photographs, of mass-produced images, has been transformative. In modern culture, we depend on images, constantly producing and consuming them in every aspect of society, from politics to science to capitalism. We are addicted to aesthetic consumption: images themselves, literalised by postcards, are a consumable product. We resist the fact that copies of reality are not, in fact, reality. Postcards act as surrogates: ‘both a pseudo-presence and a token of absence’, as Sontag writes. She warns that we must not take them too seriously. For Walter Benjamin, in The Work of Art in the Age of Mechanical Reproduction, copies of art exist outside the ‘sphere of authenticity’; postcard copies do not possess the ‘aura’ of the original, with its unique aesthetic authority. Copies ‘make us feel that the world is more available than it really is’, as Sontag asserts.

Yet perhaps there is still value in that feeling. A sense remains that a postcard is, somehow, a part of the original artwork, a direct extension of it. Just as we are reluctant to throw out an old photograph of a loved one, one would be uneasy discarding a postcard. The copy is irrevocably tied to the reality – and to destroy the copy feels, if only symbolically, like desecrating the real. To photograph or to own a postcard is a means of acquisition and appropriation. It allows us to lay claim to art that we could never hold in our hands; to possess an artwork, if only in pseudo-form; to own it, display it on our walls, with a tactility that flirts with reality. One can take on the role of curator, juxtaposing works that could never, in reality, stand side by side. I could have Bernini’s Apollo and Daphne, the first century Roman Flora and Ed Ruscha’s Noose Around Your Neck within a foot of each other. Free from the constraints of ownership, geography and time that separate art (and us from it), we can transcend practicalities. Every wall of postcards creates a unique dialogue; each can be your own ideal art collection. To own postcards is to take Malraux’s musée imaginaire, and relocate it – from the mind or, today, online (as in the USEUM project) – into the material realm. Postcards shift art from the public to the private sphere, and back again.

In this sense, postcards democratise art. Small, lightweight and cheap to produce, they are accessible, even universal – an antidote to the exclusivity of the art world. The postcard is an equaliser for artists, too: they bypass galleries, from which some artists were historically excluded. Eleanor Antin, for example, displayed her 100 Boots (1971-1973) by sending it as a thousand postcards to the art world. Where traditional art institutions exclude certain artists, they can also deny subversive thought. Meanwhile, the postcard, cheap and freely distributed, is a remarkable political tool, used for radical ends from feminist to antiwar movements. The postcard itself is symbolic of freedom and universal access, an egalitarian vision of art.

During lockdown, few of us saw more than replicas. Like everything else – faraway places, family and friends – art revealed itself in two dimensions, mediated by a camera. With galleries shut and art behind closed doors, we were more dependent than ever on the token, the image, the postcard. We had to rely on the substitute. We must hope that Cutts is right that the world exists to be put on a postcard, because when we can’t access art (especially in current times) because postcards may be all we have. Sending them also has new value – connecting us in a physical, three-dimensional way, something currently restricted. We may have felt imprisoned in lockdown, but photography – and postcards – ‘imprison reality’, to quote Sontag again. If we can’t access the world like we used to, we can bring it into our homes, and our minds, as an anthology of images, as 10x15cm fragments: ‘to collect photographs is to collect the world’. Sontag’s essay cites Godard’s Les Carabiniers (1963) – in which two triumphant heroes, promised the world, return only with hundreds of postcards. The postcard literally objectifies reality, preserving an experience (a gaze at a painting, a trip to a ruin) long after it’s over.

Ludwig Feuerbach wrote that our age ‘prefers the image to the thing, the copy to the original’, and Sontag is inclined to agree; indeed, great thinkers have warned of this since Plato’s shadows in a cave. Living through a pandemic, it feels like a stretch to say we prefer the copies on our walls and our screens to originals out of reach. Still, we are more familiar with the image than the thing. We engage with an original artwork for a few minutes in a gallery. But when we put a postcard on the wall, we engage with it on a daily basis. The reality fades, and our conception of it is usurped by the copy.

Is it true, then, that the world exists to be put on a postcard? Insofar as the world exists for artists, the answer is yes: everything is copied, and as the world is copied into art, art is copied into postcards. The world itself cannot exist on a postcard, but ‘the world’ – its replicas, its surrogates – certainly can. Resemblance is never reality, but is often all we have; it can take us to the art beyond our homes, parks and grocery stores. The postcard affirms the cult value of art: value that lies in its very existence. To have a postcard is to be reassured of that existence, to transport us even when we can’t see it. To decisively affirm Cutts’ words may be too much to ask – but it seems to me that now, in some way, postcards exist to put us in the world.