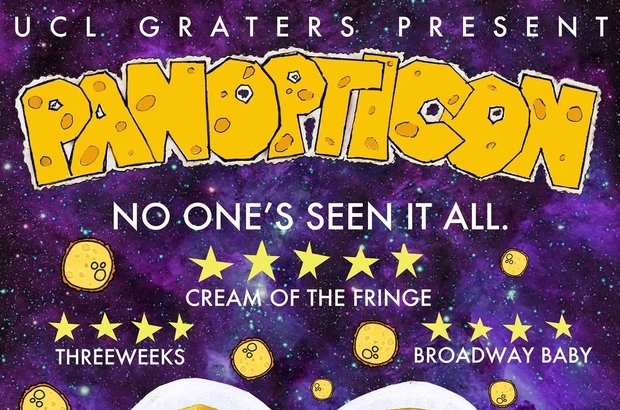 From the brainwaves of Felicity Wareing, Joe Andreyev, Luke Shepherd, Sam Dodhgson, Isobel Macleod and Alice Fraser comes Panopticon, a fast paced, jam packed hour and a half of fresh new sketches that will make you giggle until your jaw aches. This selection of sketches matches as many different tastes as a box of Quality Streets. The show will provide a laugh for each audience member, and even if some sketches fall slightly flat, the ground is made up elsewhere. Whatever your preferred type of humour, there is something for you here, as the show riffs astutely off today’s world and is painfully relatable at times.

The real stand out element of the show is the performances of the Graters themselves; they move fluidly between accents and mannerisms, constructing convincing characters within a matter of seconds, dragging us on a wild journey between concepts and narratives. The accents are well done, and barely slip, a highlight being a heavily accented sketch about an amateur dramatic’s performance in New York. The costume elements and props are minimal, but this allows physical theatre and gesture combined with vocal work to carry the show. The energy of the characters bounces onto the audience so that they can’t help but chuckle and being sat in the front row permitted us a delightful level of interaction with the characters on stage. Their occasional breaking of the fourth wall builds a fun relationship with the audience but keeps us on our toes as they switch constantly between characters. From sleepy surfers to pushy interviewers and even an arms dealer, the range of personas they embody takes the audience on a wild ride and makes for a fun hour of entertainment.

As for the jokes themselves, the variety is exciting, but a few faux pas slip in. Comedic timing wasn’t always spot on and a few jokes didn’t quite land. During one sketch involving penguins and regurgitated cake, for example, the flightless penguin was an appropriate bird to choose, as the joke never quite took off. Some editing from an outsider to the tight knit group would not go awry before the show hits Edinburgh. One of the stronger jokes came when we learned that Tories don’t have souls because of a numbing drug called ‘conservatol’ that knocks it right out of them. Though this is not news as such, it made for an entertaining sketch. A skit about an arms dealer bringing her sassy daughter to work also landed some excellent one-liners, including a threat to cut the enemy from the waist up, met with the daughter’s innocent ‘Daddy says Mummy is dead from the waist down’. A sketch tackling feminism also used a clever concept, an interview of a man by two women in the overly personal and lowkey misogynistic style women are often interviewed, but though it had potential, this wasn’t quite executed to a point where it was understood. With some work on timing, many of the sketches have the potential to land more successfully, but they do need to be tighter.

If you’re looking to be entertained, look no further than this brand new show by a vibrant group of students. An astute and satirical look at the world around us, take a look through their Panopticon and fun certainly awaits, whatever your age or preferred type of humour.