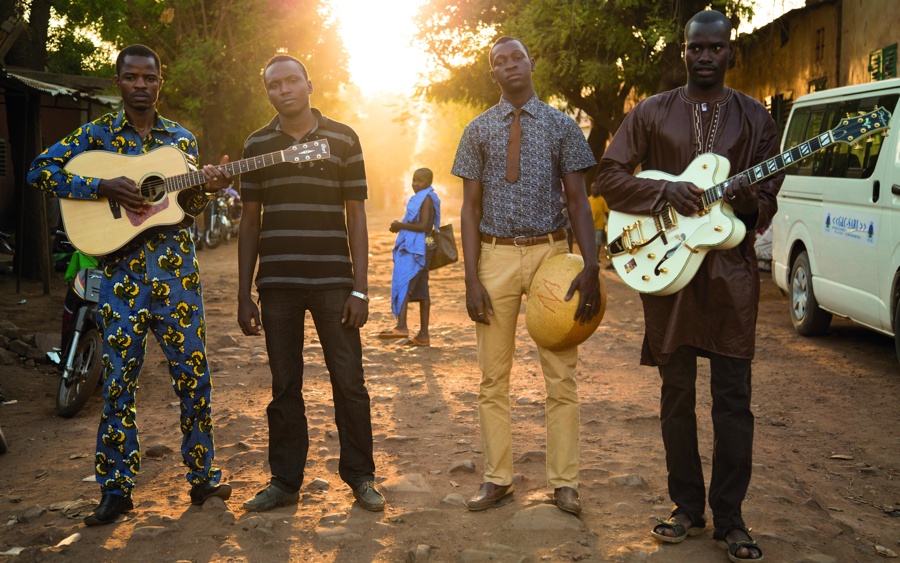 JUDITH BORGHOUTS is impressed by ‘They Will Have to Kill Us First’, a documentary about jihadist rule in Mali.

In January 2012, jihadists invaded and took control of northern Mali. They imposed sharia law, and one of the consequences of the strict regime was a ban on music. They Will Have to Kill Us First follows the journeys of several musicians forced by the ban to flee to the south in order to keep playing their music in secret.

The decision to concentrate on the stories of a handful of people, rather than attempt to capture the situation as a whole, makes the film feel very personal and close to the heart. We follow singer Disco, a renowned singer with a strong personality. We meet Khaira, who has had a long career in music and is seen as the ‘nightingale of the north’. We are introduced to the newly-formed band Songhoy Blues, who are noticed by Damon Albarn and make a trip to London, opening Albarn’s show and playing at shows across the UK. Their rise to stardom in the UK is sharply contrasted with the oppression their counterparts face at home.

The documentary goes further than depicting the dangers of extremism we all know from mainstream news outlets. It shows the emotional roller coaster the main characters go through, telling a story of how different personalities choose to deal with the music ban. The cinematography is stunning and the soundtrack highlights the bizarreness when something most of us take for granted is taken away, especially in Mali where music is a way of life. Shortly after our introduction to Disco we meet her husband Jimmy, who is a member of the MNLA: a group of separatists whose rebellion against the government incidentally gave the Islamic extremists an opportunity to take over in the first place. Few words have to be spoken to feel the tension in their marriage.

There is pain, fear, love, hope and even moments of laughter, yet the film never attempts to make the story lighter than it is. The film is successful in portraying this touching, emotional story in a subtle and realistic way. At several moments the film breaks away from the main characters and switches to graphic footage of what is happening in the north. One scene depicts a hand being sawed off, while another shot captures the ruins of a blown-up building. As harrowing as it gets, above all the film is a story of hope and courage, best depicted in the powerful ending scene. As soon as an opportunity presents itself, Khaira hastily packs her bags to organise a public concert. It is a dangerous endeavour which even Disco warns her against, but Khaira’s determination stands.

It just goes to show how important music is for these musicians and how they are willing to risk it all for one concert. There may be a lot of things the army can do, but forcing them to abandon music forever is not one of them; they will have to kill them first.

They Will Have to Kill Us First will have its European premiere on 13 October 2015 at the London Film Festival, and will have its UK Theatrical Release Date on 23 October 2015. Find tickets here: http://theywillhavetokillusfirsttickets.com/