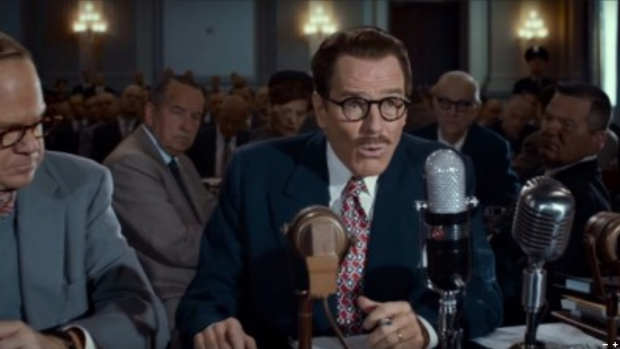 Director Jay Roach, better known for his comedic work on Meet The Parents, takes the helm to direct this political and largely dramatic narrative starring Bryan Cranston as the eponymous subject of the film, Dalton Trumbo.

With a cast that also includes Diane Lane, Elle Fanning and Louie C.K, Trumbo follows the titular screenwriter and communist as he becomes accused of threatening American security, leading to time in prison and, rather worse, being blacklisted and prevented from receiving any work. Going under numerous pseudonyms, Trumbo attempts to undermine the very limits set against him in a valiant effort to regain freedom and support his family. Hollywood doesn’t sound so great now, does it?

What is great in Trumbo is Bryan Cranston’s nomination-worthy turn as the title character. Somehow, despite the very quirky and off-beat nature of his performance in the film, Cranston rises above the category of imitation and pastiche to deliver an excellent, emotive and consistently entertaining portrayal of this real-life figure. In many ways he carries the narrative through his efforts to bring so much charisma and personality to the role, and his delivery of Trumbo’s famous witticisms and mannerisms is pitch-perfect.

Props also have to go to the make-up and hairstyling team for their work on not only Cranston, who seems to bear an uncanny resemblance to Dalton Trumbo in the film, but also several other actors, who seem to evoke the image of their historical counterparts incredibly well. Dean O’Gorman, for instance, who admittedly is similar in appearance to Kirk Douglas anyway, is made to look so alike to the famous movie star of the fifties and sixties that, quite frankly, it’s a little unnerving.

Shot in an old-fashioned style and colour-graded as though it were from the sixties, Trumbo does a competent job of transporting its audience back to another period of time, and it admittedly tackles themes which require addressing. While Oscar contender Bridge of Spies was undecided in its judgement of a Cold War USA, this film leans towards the oppressive and paranoid sense of instability of the time. While it is murky in its attention towards how far Trumbo’s communist beliefs and practices went, the movie does ask some  important questions about whether a writer, even in a period of hostility, should be condemned for dangerous politics or ideas, and whether or not film is a medium which is liable to corruption by a distorted form of philosophy.

The problem with Trumbo is that even though it asks these questions, the film is never incisive enough to truly answer them. A story of a writer who was falsely accused of treachery, wrongfully placed in prison, and had his entire livelihood threatened upon release sounds like a narrative full of grit, heartache and emotion. Well, think again. Trumbo is more melodramatic than hard-hitting, more superficial and superfluous than it is substantial. There is no real penetration of the film’s deeper, political background and the movie is pitched as a very straight-forward and surface-level fight between good and evil. Caricature villains take the place of anyone resembling a real person, and the entire feature has a rather jaunty lightness to it that doesn’t comply with the nature of events taking place. Other issues such as Trumbo’s cancer are skipped over like hurdles on a running-track, without any real weight, seriousness or analysis attached to them. Trumbo’s time in prison looks like a vacation. This tonal discomfort harms the film, and prevents you from really connecting with anyone other than, perhaps, Trumbo himself.

Helen Mirren plays some kind of 60s-Hollywood version of Cruella De Vil. In a sheer pantomime routine of an anti-communist columnist Hedda Hopper (say that five times fast) Mirren turns up the cheese to put in one of the most embarrassing portrayals of a character I have seen in recent memory. The entire movie has a weirdly extravagant and over-the-top atmosphere surrounding it which, looking at Roach’s previous work, may indicate this was a poor choice of director.

Trumbo is a confused film that never really seems knowledgeable enough to approach its subject matter correctly. It doesn’t really have a clue what it’s supposed to be – and, above all else, it’s boring. Meandering from plot point to plot point, for what feels like an hour longer than the film actually runs for, this movie just never seems to engage properly with it’s core themes and, outside of Trumbo’s dealings with his family and associates, there is very little of interest here. Although Cranston is excellent and is deserving of an Oscar nomination, he is let down by the weird chasm of dramedy that the movie falls into. I say stick to Peter Askin’s 2007 Trumbo documentary which, by all accounts, sounds much better.

‘Trumbo’ is on general release.