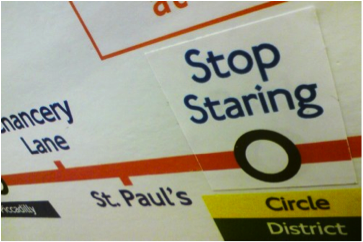 Over the last few weeks countless bloggers have been uploading online photos of satirical stickers, which have been stuck up in various tube carriages across London. It’s nice to have a bit of comedy generated by our Underground: especially in light of the recent strike, which has led to the tube being a great source of angst for flustered commuters and politicians alike. 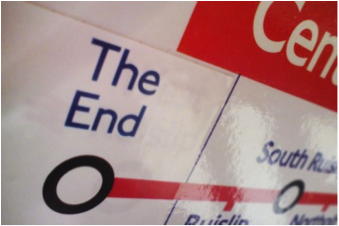 The stickers either replace stops along the tube maps or have been stuck over the standard Boris-approved signs, and are very, very funny. Some are just plain silly, such as ‘Peak hours may necessitate that you let other people sit on your lap’, or the replacement of ‘Shepherd’s Bush’ with ‘Shepherd’s pie’.

Most of them though are amusing however, because of their perceptive acknowledgement of certain unwritten tube rules, such as my personal favourite: ‘Don’t acknowledge fellow passengers or sustain eye contact beyond 2 seconds. Please respect urban solitude.’ Their satirical response to our finely honed British culture, strikes very close to the proverbial bone.

We all know that the tube is a place for solemn, golden silence, where we pretend for the duration of our underground journey that we can neither see nor hear our fellow passengers. Unless of course we choose to shoot a glare at the person playing music so offensively loudly that one can hear the dulcet tones of Eminem, via the bass through their over-sized headphones.

I realised recently that these two conflicting principles – ‘I can neither see nor hear you and am going to pretend that you do not exist, but I also wish to be undisturbed’ – can be incredibly entertaining. Indeed, so deeply engrained is our British distaste for confrontation, that over Christmas when two friends of mine started drunkenly singing terrible renditions of carols, not a single person (other than myself, wincingly) asked them to be quiet.

Instead our bemused fellow tube-goers re-crossed their legs, shuffled their newspapers and carried on as they were. As the recent tube art suggests: ‘iPods must be worn at all times. If you don’t have an iPod then play with your phone, read a newspaper or pretend to be asleep’; do not engage with anyone else, regardless of how irritating their behaviour.

Nearly as annoying as those who interrupt our ‘urban solitude’ through their insistence on creating a very un-English scene or behaving in an un-decorous manner, are those who have the audacity to eat on the tube. ‘Pull lever to pour gravy on sausages located in driver’s compartments’, reads one of the recent tube signs.

The thought of either gravy or sausages on the tube is nauseating to most commuters, I’m sure. We all remember the theory of diffusion we were subjected to in GCSE Chemistry; odour spreads quickly in confined spaces. Yes, I’m talking to you over there, wolfing down your Wasabi pot of deliciousness – you are making me feel as though I’m in a curry house and it isn’t pleasant. Not that I would dare tell you that, of course.

Our British urge to be polite and thoughtfully allow children, old people, limping people and pregnant women to have our seat must be carefully brandished though. It’s important to pick your audience, as I discovered several weeks ago, when a slightly portly woman flew into a frenzy, after my male friend offered her a seat: the banshee was convinced he had moved because he had incorrectly assumed her to be pregnant.

Whilst the satirical tube stickers are a great reflection of tube etiquette, they also allude to some of the frustration that the London Underground frequently generates, which has itself become part of British culture. ‘In case of train delay please snap stresstwig.’ reads another sign, stuck above an artfully drawn ‘stick’ on a carriage wall, whilst another chirpily states: ‘we apologise that all apologies to the chronic overcrowding on this train are shallow and meaningless.’

Disappointingly, it would appear that the signs have long since been taken down – I’m yet to see any on the tube myself. Luckily though, they have been widely documented for our viewing pleasure: they are a brilliant expression of London culture, which every tube-user can relate to.