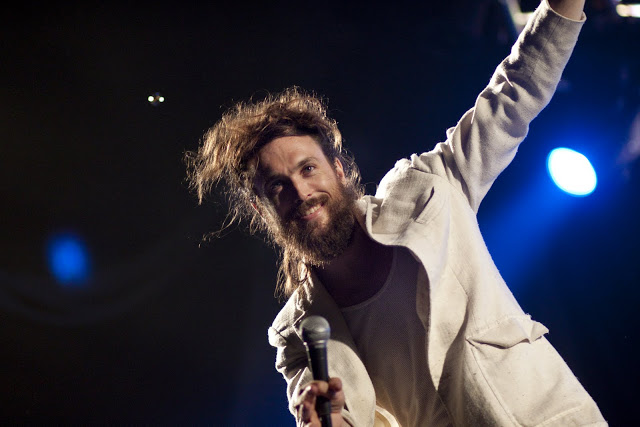 ‘40 Day Dream’ had come to an end, and a dishevelled, sexy and seemingly high Edward Sharpe asked the audience “Does anyone have a good story to tell?”

A Magnetic Zeroes groupie in the front row shot a hand in the air, Hermione Granger style, and reached for the microphone. She proceeded to tell this story:

“I was on a train in India, and I saw a small group of elephants out of the window. They were tied to a pole with very thin ropes. I inquired to the man sitting next to me ‘Why don’t they run away? The ropes are so thin, surely they could easily break them.’

He replied ‘It is because they’ve been tied up like that since they were young, the ropes don’t seem a restriction to them. They have never learnt that the ropes could break.’

I think tonight, that’s what you’ve done for us, you’ve taught us that our ropes can be broken.”

And it was true. Sharpe later said, “imagine if you were free, and I mean really free”. I scoffed – what a cliché! But I found that I wanted to imagine. Was I living in Plato’s cave? Were the Magnetic Zeroes my saviours?

I wondered in that moment what I was doing in my regulated life in London – getting up, going to university, living with people who work. I never do anything very wild or spontaneous, beyond drinking too much tequila. I am just living in this rat race that we know to be life. I want the creative; I want to live in an RV and follow a band around, get high, wear shit clothes, never brush my hair and sleep with lots of enlightened musicians. Christ, this £22 ticket had changed my life. I was probably overthinking thing, and should just look at it as a great Wednesday night at the Shepherds Bush Empire.

Back to the band, there were about eight of them. Some are worth mentioning. There was a very good-looking drummer and a guitarist who had the voice of a modern, white Otis Redding. There was also one girl on the stage. She was very cool, in an understated way. She was wearing black leggings, black boots and a black baggy jumper. Her hair was scraped back into a ponytail and her make up was minimal. She then began to sing like an angel. A quirky, folksy angel. Not sexualised, not trying to be attractive, just talented and herself. It was then that I realised, that’s what its like. That’s freedom.