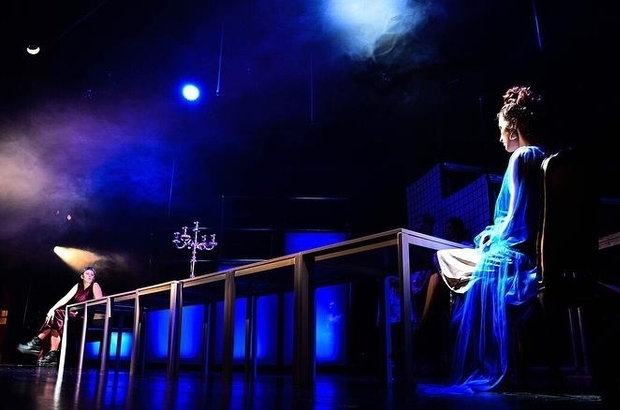 It is perhaps stating the obvious that 1980s Punk Rock does not immediately spring to mind when thinking about late 5th century BC Greek tragedy. Yet the niche context is the defining feature of this refreshingly original take on the classic Sophocles play, which combines stunning aesthetics with flowing, passionate physical theatre that – in the words of the eponymous Electra herself – literally “floods with grief”.

The problem with staging Greek Tragedy in the 21st century is a matter of pace – the rhythm of the ancient form is much slower than what we’re used to in the present day. The myths and cultural allusions that are deeply embedded in the play too can make navigating the plot a struggle. With this in mind, the anarchic, anti-establishment musical genre of this production is aptly suited to exploring the central themes of the play, and the physical theatre works to make the narrative lively and energetic; director Lovis Maurer and producer Nick Ferris have done remarkably well to update the perhaps archaic drama, finding an aesthetic that perfectly captures the anger and angst that permeates the story.

Intensely heartfelt dialogue is punctuated by wonderfully elegant scene changes that meld the vibrant elements of the production together. Movement director Helena Smith deserves enormous credit for the mimed interludes that depict scenes of the play’s backstory. The chorus with passionate sensuality acts out the characters’ pasts through these scenes of interpretive dance, often silhouetted by backlights to magnificent visual effect. Not only do these contribute to the overall artistic merit of the production, they add a necessary rhythm to the performance, drawing the audience through the story’s emotional ebbs and flows.

Indeed, stylistically, the production is gorgeous. Many scenes are almost cinematic in their presentation, with ardent colours and clever staging used to frame the action like a camera would a film. Stage designer Loukis Menelaou has created a delightfully animated set, using neon lights and removable panels to present a backdrop that slowly disintegrates as the characters do so themselves mentally. Orestes, Electra’s exiled older brother played by Daniel Seifu, provides another moment of visual beauty: his faked death – beautifully staged as he sinks into a sea of bodies, backlit by an oppressive orange searchlight – is a key moment contributing to the general violence of the play. Costume designers Martina Aghopian and Emma Deshpande also have created a superb wardrobe that complements the stage and lighting. Electra’s blood-red dress in the first scene in particular is as striking as it is intimidating, as it foreshadows her mother’s bloody murder that will dominate the play’s final vignette.

The main conflict of the play revolves around the struggle between Electra and her mother Clytemnestra. Florence Woolley, in the title role, is superb as the distraught teenage daughter, torn between her familial ties and her lust for revenge, while Mercedes Bromwich gives an equally emotive performance as Clytemnestra, riddled with her own guilt yet spurned on by an instinctive sexual desire. One moment they are in silence, opposite ends of a long dinner table, eyeing each other carefully through forced smiles; the next, they explode into a heated, sweltering argument, where the impassioned Electra bears down over her own mother from the table top.

This theme of ‘youth in revolt’ plays neatly to the Punk culture aesthetic, prevalent most powerfully in the original live score that owes much to musical director Ed Wing. At times, the score creates a magnetic aura around the action, continually reshaping the atmosphere as the production progresses. Vocals – provided by Ethan Burton – characterise the aggressive, grief-fuelled sections of the play, while periods of more mellow, instrumental melodies allow periods of reflection, and further the production’s fluid rhythm. The musical component also recalls the old traditions of classical oral story telling, a throwback to the original Greek tragedies derived from choral forms.

The power of youth, and the human urge to rebel, is central to this poignant, yet tender production. The production is a fascinating exploration of revenge, grief and remorse: aesthetically stunning and dramatically intriguing, this succeeds as a true homage to Greek classical theatre.