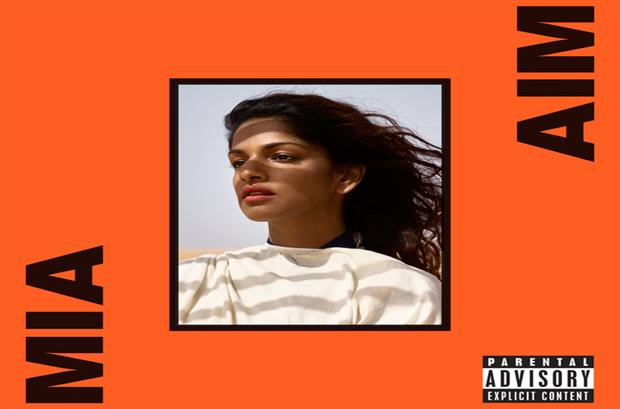 ‘Ebola scare or a bomb scare, / It’s the same sh*t, just hit and share’. Aptly titled A.I.M., M.I.A.’s fifth and apparently final studio album sees her seek out and focus her sights on issues of a wider scope than ever before. Though still an unflinching exploration of contemporary Asian and Middle Eastern cultures, A.I.M. seeks to expose and untie the fabric of modern society on a global scale.

A move away from earlier electro and dancehall-inspired singles like ‘Galang’ or ‘Sunshowers’, A.I.M. is certainly a more mature sound. Defined by rumbling basslines and carefully selected samples from the worlds of ragga, jungle and Indian folk music, the focus is instead placed on M.I.A’s mastery and manipulation of language. Though having learnt English as a second language whilst growing up in Mitcham, south London, M.I.A’s unique ability to twist words and to lay a personal claim to their meanings is a talent celebrated throughout her latest album.

Her lyrics range from the powerfully crude – ‘I talk and talk until I piss ‘em off’ (‘Talk’) – to the metaphorically brilliant. What may at first appear to be a track comprised entirely of nonsense lyrics, ‘Bird Song’, is in fact steeped in cultural allusions and subtle manipulations of language. In less than 200 words, M.I.A. weaves together references to Samuel Taylor Coleridge, Nelly, Prince, R. Kelly, and the film ‘Home Alone’, all whilst toying with various bird-related puns: ‘culture vultures’, toucans, robins and lyre birds. Most impressively, she weds South Asian and British cultures with surprising ease, effortlessly switching between aspects of her own cultural backgrounds, and the cultures of countless other mixed-heritage listeners. On her eighth track, ‘A.M.P (All My People)’, ‘Devon’ is married with ‘Yemen’, and ‘Oman’ becomes ‘Yeah man’, as the boundary between Euro-American and Asian cultures is stressed and dissolved.

The explicit blending of Asian and Euro-American cultures is one feature that sees A.I.M. distinguish itself from M.I.A’s earlier releases.  Part of the beauty of albums like ‘Arular’ (2005) and ‘Kala’ (2007) was their predominant and unashamed Asianness; interludes like ‘Dash The Curry’, which featured lines such as ‘And if you f*ck with me,/ I’m gon’ dash my curry’, and ‘Mango Pickle Down River’ were undoubtedly established in M.I.A.’s Sri Lankan and Indian roots.

Though A.I.M. is evidently still a celebration of India and the Middle East, M.I.A. adds to this her own unapologetic use of Western culture. In a global society where non-dominant cultures are increasingly appropriated, M.I.A. in fact does the exact opposite, brazenly incorporating and repurposing aspects of the dominant Euro-American culture for her own benefit. These incorporations of Western culture throughout the album are numerous, but are always somehow manipulated in order to fit M.I.A’s own cultural register. On the track ‘Foreign Friend’, she makes reference to the classic film ‘Forrest Gump’, at first repeating the famous line, ‘life’s like a box of chocolates’, before then challenging this with the question: ‘We say, who packed it [?]’. Likewise, on the track ‘Jump In’, she makes reference to ‘Noah’s Ark illegal’, taking the Biblical story of Noah’s Ark and applying it to the on-going refugee crisis in the Middle East and Mediterranean. In this manner, throughout A.I.M., M.I.A breaks down cultural barriers, boldly adopting white culture to strike back at the way in which non-white cultures have, and continue to be, appropriated themselves.

M.I.A’s success in blending and challenging cultural boundaries has not, however, been achieved without controversy. In April 2016, M.I.A. made comments concerning the Black Lives Matter movement, asking when figures such as Beyoncé or Kendrick Lamar would have the confidence to declare that “Syrian Lives Matter” or that “Muslim Lives Matter” as well as the lives of the African-American community, comments which contributed to her being dropped from her headline spot at London’s recent Afropunk festival.

Though unwise and inflammatory, M.I.A’s comments do highlight on-going debate on how and where campaigns for different minority rights may interact and intersect in the 21st century. On one hand, her remarks can certainly have been seen as an attempt to belittle the Black Lives Matter movement, especially considering their poor timing, being made as they were during a period of deep mourning for the African-American community. Commentators criticised what appeared to be a push for separatism and a fractionalisation of the minority rights struggle, in which Muslim lives were being championed as a cause opposed to the Black Lives Matter movement, rather than as a campaign united with it. For many, M.I.A. had created a damaging division that blatantly ignored the fact that the labels ‘African’ and ‘Muslim’ have been, and continue to be, overlapping categories (many Africans themselves also being of Islamic faith), as with the labels ‘African’ and ‘refugee’.

Conversely however, M.I.A.’s comments may also be read in the exact opposite way. No stranger to issues of race, and certainly not a figure whose outbursts can be pardoned, Azealia Banks, in one of her more rational moments, argued the following:

Though heavy-handed, Banks’ comments do raise an issue frequently overlooked; many Muslims and Asians do indeed consider themselves ‘Black’, even if they are not technically of African heritage, and thus feel that their rights must too be championed as part of any movement for ‘Black’ lives. Rather than advocating separatism, M.I.A’s remarks highlight the need for a universal struggle in which Asian and Muslim lives may be represented as a part of ‘Black lives’ without this necessarily resulting in a diversion of attention away from the African-American community and their present struggle.

The struggle for universalism is ultimately the message that A.I.M. preaches: the breaking down of borderlines and the dissolution of ethnic divisions. It is an album defined by its opening track, ‘Borders’, in which M.I.A. systematically demolishes the boundaries created by contemporary government. As an album, it is uncomfortable to listen to, testing the extent to which music and politics can coincide, whilst exposing and challenging the listener’s own position in a truly global society. With the release of her last studio album, M.I.A. withdraws with an aim as dangerous as her first.