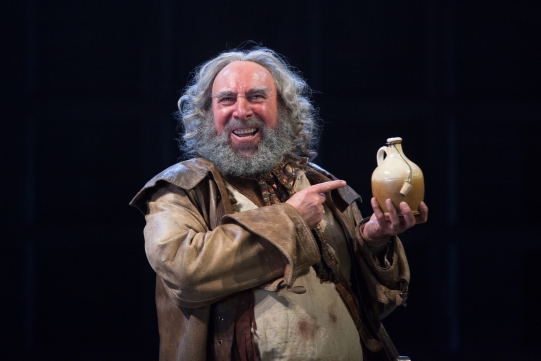 Gregory Doran returns to the Barbican this year for another excellent production with the Royal Shakespeare Company. Doran’s production is strong when it comes to Shakespeare’s characters.  Antony Sher’s Falstaff in particular is reliably scene-stealing. The staging, however, is often subdued at points where the play calls for expansive exuberance. The diminished role of music, too, unbalances the opposed forces of regal sobriety and raucous carousing which animate the play. While the end result is an enjoyable performance, it does sit a little uneasily on the stage; and not, perhaps, in a way that Doran intended. 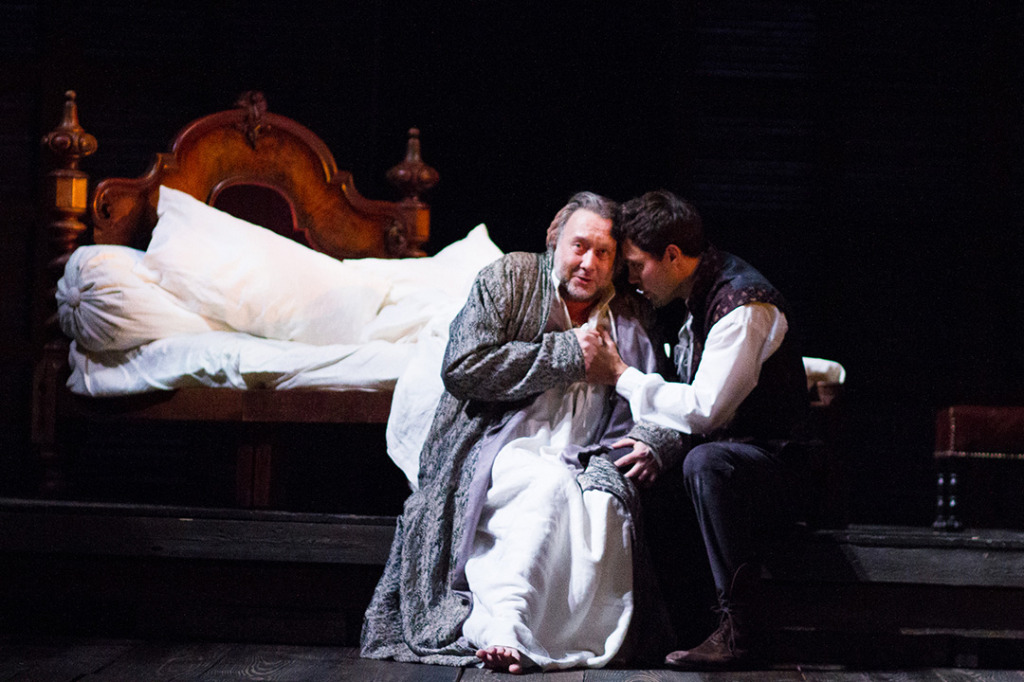 Superficially, the two Henry IV plays often feel like they’re not particularly concerned with the tale of that King at all. And as such, productions often stand or fall on the strength of the displaced centre of the play, Sir John Fallstaff. In Part I he claims that to ‘banish plump Jack’ would be to ‘banish all the world.’ Certainly Falstaff is an epitome of tawdry worldliness, as well as the kind of logical sophistry required to convincingly make such a claim. Sher’s Falstaff does not disappoint in these respects. From his shining, rubicund face to the gaudy mendacity of his speech, Sher brings this English Bacchus to life: his delivery calls out for particular praise. A careful annunciation of each and every one of his jibes, witticisms, and declarations lends his dialogue an authority through its ponderous meanderings. Sher’s Falstaff, the arch-tavern jokester, is the figure which you plant your chair next to because you don’t want to miss the moment when his lulling, rhythmic drawl suddenly sharpens to a point. You just want to make sure he’s not brandishing it in your direction.

The enormous potential of Falstaff is, however, a little let down by the staging. The tavern scenes are relegated to a small raised platform in the middle of the stage. The cramped quarters provide opportunity for some fast-paced physical comedy with Pistol, but at no point do they create the convivial atmosphere which Falstaff needs to thrive. In the Gloucestershire scenes, in contrast, Falstaff can hobble and gesticulate, make illicit deals and scathing asides to a much greater extent given the latitude the set offers the actor. The lack of music in the tavern and pastoral scenes is also disappointing. Music is used mostly for the sombre occasions of royal death and coronation, which leaves the opposing settings a little hollow with its absence.

When the play requires the pathos and extravagance afforded by music and effective staging for the later court scenes, Doran’s production provides in bucket-loads. The death-bed scene between King Henry (Jasper Britton) and Prince Hal (Alex Hassell) is brilliantly claustrophobic as we feel Hal almost buckling under the weight of his new responsibility. In a play about the unease created by conflicting public responsibilities and private inadequacies, these moments of bracing against the pressure of a new life are as crucial as the redemptive journeys of either Hal or Henry. Falstaff’s unease – at points full-blown anxiety – is touchingly explored too. As the fear of death increasingly grips his heart, we see the character’s mask of charisma slip off, revealing the frailty of human pulp beneath.

The play’s evocation of this dramatic atmosphere of tension, toil, deflection, and deception is excellent. While the occasional maladroit scene is confusing, the strength of the acting and the intelligence of the production make for an equal number of thrilling moments. I wait on tenterhooks to see how Doran grapples with Henry V.

Henry IV Parts I and II will be showing at the Barbican until the 24th January 2015. For more information and tickets please click here: http://www.barbican.org.uk/theatre/event-detail.asp?ID=15390 . As part of RSC Key, 16-25 year olds are eligible for BP £5 tickets. For more information on this offer please click here: http://www.rsc.org.uk/support-us/key/