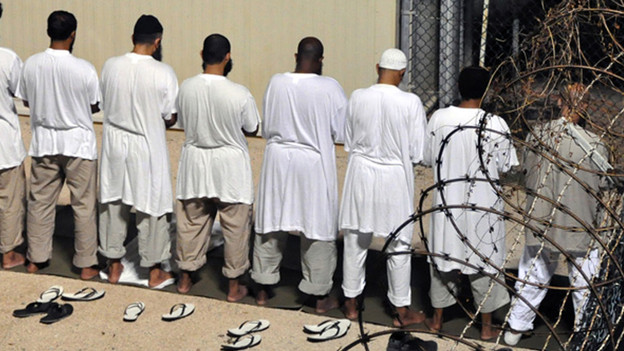 Courtesy of DocHouse, TOM GLEDHILL checks out the ‘thoughtful and engaging’ documentary Uyghurs: Prisoners of the Absurd.

After fleeing Xinjiang in northwest China due to persecution by the government, twenty-two men found themselves falsely sold as terrorists to the US in the chaotic aftermath of 9/11. Uyghurs: Prisoners of the Absurd is an efficient and focused documentary that follows the lives of these men and their struggle to escape their eventual detainment in Guantanamo Bay.

Patricio Henríquez’s film succeeds mainly due to his decision to place the central focus on a few individual stories, rather than offering an overarching explanation of events told primarily in the abstract. Although mainly comprised of interviews (both of the detainees and those involved in freeing them), basic animated maps and archival footage are also utilised to provide geographical and political context. Beyond this, discussions of the film’s sense of style are almost entirely irrelevant. Regardless of the visual aesthetic, the film manages to communicate potentially challenging historical and ethical content to an audience that need only have the most basic grasp of the conflict in the Middle East. It is exactly because we hear the stories from the men themselves rather than a consistent narrator that we relate to them as human beings first and are consequently engaged as it later segues into greater political content. From descriptions of fleeing through the Tora Bora mountains to escape the first wave of US airstrikes, to being tricked into a Pakistani prison—we hear all these stories from the perspective of those experiencing them first-hand, and are allowed to respond to the stories in both an emotional and intellectual way.

After their imprisonment in Guantanamo in early 2002, the film becomes centrally concerned with the Uyghurs’ treatment as prisoners, both on a daily basis and in a broader legal sense. We’re given detailed accounts of numerous interrogations and depositions, trials, hearings and, eventually, a federal court case. No matter how apparent their lack of involvement with the Taliban becomes, nor how emphatically they display their own innocence, the length of their imprisonment rises slowly from months to years. We’re shown glimpses of their tiny, bare cells and the various complexes they occupy. Most harrowing of these is Camp 6, a high-security facility where prisoners are held in their cells for 22 hours a day, save for a shower or a visit to the ‘recreational’ area: a room big enough to pace around and see a small square of the sky through a grate in the roof. A sign outside its entrance reads: ‘Honour bound to defend Freedom’.

The film is at its most potent when it contrasts the tragic injustice of the Uyghurs’ situation with archival footage of White House press junkets and speeches in congress, prising open the gap between purported truth and the Uyghurs’ day-to-day reality. When this hits hardest, the glaring difference presents a blackly humorous real-world farce. As a piece of documentary filmmaking it’s difficult to find much wrong with Uyghurs: Prisoners of the Absurd in either its story or execution. Though not traditionally cinematic, it deals with the details and ethical implications of its story in a thoughtful and engaging way and, at ninety-eight minutes long, never outstays its welcome.

To read more of Tom’s reviews, you can check out his blog here.