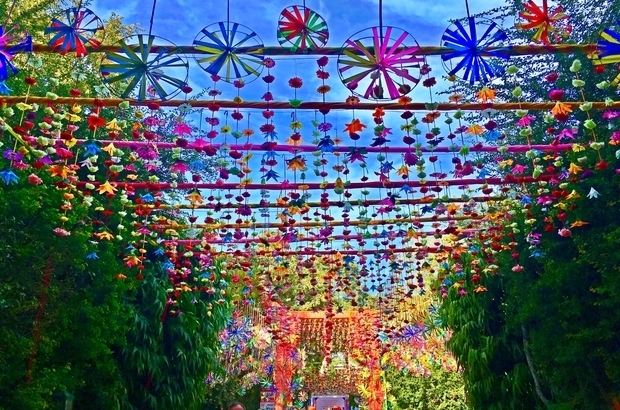 Through the dusty streets of the Pink City emerge ancient palaces and city gates. Next to these are shops selling mobile phone chargers, cafés blasting Bollywood music and idle Uber drivers awaiting custom. While Jaipur’s architecture is characterised by a mix of Rajasthani and Mughal styles, the city itself is where old meets new. What better place to celebrate ‘ten years of the best writers and thinkers from around the globe’?

I recently attended the tenth Jaipur Literature Festival, where some of the world’s leading artists, scientists and thinkers gather for five days of talks, debates and panels. For those five days, the Hotel Diggi Palace feels like the intellectual heartbeat of the world. The debates are heated, the talks passionate, and you leave a panel feeling that your mind and soul have been nourished with new insights. Many from a certain ‘set’ in India – middle-class, well-educated, international in their outlook yet Indian in their identity – ‘get down to Diggi’ each year. But the audience is not limited to this set because, crucially, JLF is free. This, and the mixture of talks in Hindi and English make events and ideas accessible to many in the region. In a country with huge inequality, this is a powerful statement in favour of opening up intellectual circles.

Indeed, some of India’s most beloved figures attended and gave their talks in Hindi – including Bollywood actor Rishi Kapoor, screenwriter Javed Akhtar and the celebrated poet, Gulzar. These were among the most popular talks and drew large contingents from local schools.

With a population of over one billion people, competition in India in every sector and at every level is incredibly high. This puts added pressure on pupils to distinguish themselves academically: many students receive extra tuition and there are few opportunities to learn for the sake of learning. JLF is a space for young people to learn information they will not be tested on, and to hear ideas that do not come from a textbook. The festival also brings international authors to their Indian readers. Writers such as Paul Beatty, winner of the Man Booker Prize, rarely go on book tours in India. Yet as the length of the queues for book signing stood testament, they are hugely popular.

The interest was reciprocal and international visitors took full advantage of the vast range of Indian speakers in attendance. While the discussions covered many themes there was a prevailing interest in India’s history, its present and its future. ‘Welcoming the world’ was how the festival was kicked off by its directors, and the five days were as much a celebration and examination of India as of literature and culture in general. From a discussion on the Vedas, one of the oldest scriptures in Hinduism, to an illustration of the disparity among Indian states, each talk highlighted the complexities of the subcontinent. This seems incredibly important in an increasingly polarised world. As Adichie said, ‘when we realise that there is never a single story about any place, we regain a kind of paradise’.

This applies to both international perceptions of India and Indians’ perceptions of their nation. India is moving further to a right-wing, Hindu nationalist version of itself, and it is important now more than ever to have a space to discuss, share and question. While there has been criticism of the Festival’s sponsorship by Zee, a media company whose news channel has been said to ‘serve as the media bludgeon of the Hindu right’, many of the discussions were in favour of a strong left. A highlight was ‘Why the Future of Free Speech depends on India’ – a conversation between Timothy Garton Ash and Salil Tripathi. They spoke about India as a swing state for global free speech, and the importance of cultivating a sense of ‘robust civility’ amongst its population. They also argued for an increased awareness of the diversity of the subcontinent.

Historically, the desire to create an Indian monolith has affected literature in astounding ways. Books have been banned, essays removed from reading lists, and authors blackballed across. The festival represents a coming together to recognise and celebrate diversity. Author Perumal Murugan, whose book One Part Woman was banned for some time, has spoken at JLF in the past. This year’s festival stayed true to its values of open discussion, debate and knowledge-sharing. Panels such as ‘Being the Other’  – a discussion of the experience of being Muslim in a divided India  – critically engaged with issues of prejudice, censorship, and its effects on literature. It is essential that JLF continues in this vein in the future, regardless of its sponsor.

India’s diversity makes it a unique location for the sharing of knowledge. With one of the largest youth populations in the world, India will be instrumental in sculpting the global landscape of free speech and access to information in the future. However, these traits have also made the country susceptible to polarisation and extremism. The Jaipur Literature Festival makes a powerful statement in favour of the democratisation of ideas. While incorporating elements from all aspects of culture, literature is promoted as the principle vehicle for idea sharing. The festival recently created ‘Jaipur Bookmark’, a platform devoted to bringing authors, publishers and translators together. As a practice in empathy, reading is becoming increasingly important as part of social lives in India, where growing division has left many citizens vulnerable to alienation. The country’s first Prime Minister Jawaharlal Nehru said that ‘the art of a people is a true mirror to their minds’. JLF allows the multifariousness of India’s cultural consciousness to be freely shared and celebrated.