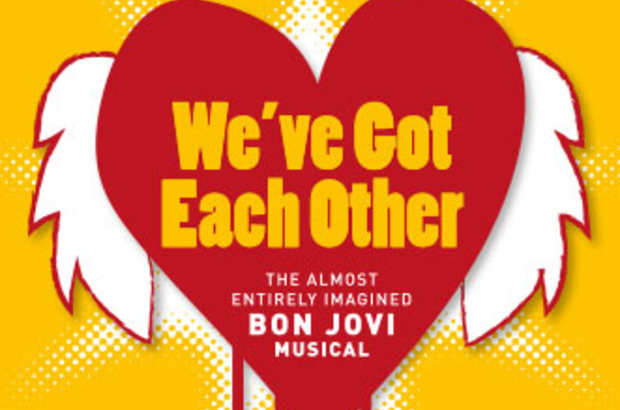 DANIEL LUBIN reviews Paul O’Donnell’s We’ve Got Each Other at the Pleasance Theatre.

It’s hard to talk about We’ve Got Each Other without giving it away. If you’re planning to see it at any point then stop reading and come back later. Otherwise keep going.

Because We’ve Got Each Other’s charm is in its innocent deception of the audience. When you buy a ticket to a Bon Jovi musical, you might expect to see an all-singing all-dancing celebration of the entirety of rock hero Jon Bon Jovi’s oeuvre (whatever it might contain). At the Pleasance however, you’re met with Paul O’Donnell’s shy announcement that for lack of budget, what you’ll actually experience is simply a detailed description of the show that never was. The audience is given the lofty task of imagining a full orchestra, a cast, dancers, stage hands, a Spanish diner, the docks of East Manhattan, and confetti, while Paul sips a pint.

Jukebox musics tend to spread themselves quite thin in covering a variety of their subject’s music. Mamma Mia! for example includes 27 ABBA hits, and We Will Rock You an overwhelming 32 Queen tracks. O’Donnell sees straight to the heart of Bon Jovi’s essence – We’ve Got Each Other’s soundtrack consists solely of variants of ‘Livin’ on a Prayer’. These include an orchestral rendition of the rock classic for the overture, a mellow piano cover as protagonists Gina and Tommy express their love through dance, and a mournful Spanish guitar version soundtracking Gina’s mother’s fight with chronic illness. Chronic illness is just one of the themes, as well as love, death, workers’ rights and gang warfare, woven into the West Side Story-esque romance extrapolated from ‘Livin’ On A Prayer’’s few lyrics: Tommy used to work on the docks… Gina worked the diner all day.

The real act of imagination is not on the part of the audience, but on that of the musical’s creator and lone performer. The show is driven by the persona O’Donnell adopts, gentle and shy but with an unwarranted sense of pomp and self-regard. Through his arrogance emerges hints of niggling insecurities, and his excessive sentimentality about the show is comically pathetic but a little contagious. As he dictates the assumed emotional response of his audience, he projects his own anxieties and wholehearted faith in the power of musical theatre to transport one away from the stresses of work, the worries of life, and the weight of a £4.50 interval ice cream on the overdraft.

Simultaneously wholly likeable and naively proud, O’Donnell’s charming character makes the bizarre use of the theatre space a consistently engaging spectacle. Though every joke is milked excessively, be it the cockney-accented dockworkers, or that many of the spoken lines are ‘Livin’ On A Prayer’ lyrics, they are not exhausted and it is never dry. The enormity of the described performance hilariously contrasts with the emptiness of the stage through O’Donnell’s barely-restrained enthusiasm.

We’ve Got Each Other thrives on its own silliness and is maintained by the tight characterisation of its hero. The self-conviction of the narrator is both the source of a lot of the jokes and the momentum. With O’Donnell’s blind confidence, it’s hard not to almost believe in Tommy and Gina’s love, in the We’ve Got Each Other dream, and even in the transcendental power of musical theatre to whisk your sorrows away, such is the bonjovial philosophy of one of the funniest, sweetest and certainly most original musicals on stage at the moment.

We’ve Got Each Other ran at the Edinburgh Fringe and transferred for one night to the Pleasance Theatre, London. Find more information here.