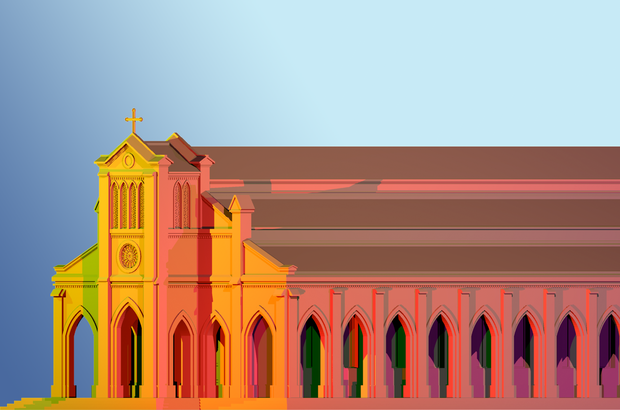 LUCY MANLEY discusses the intersection of her queer and Catholic identities.

‘Catholic’ and ‘queer’ are two words you probably wouldn’t expect to see side by side, and that is perfectly natural. Anyone familiar with Catholicism will be aware that homosexuality isn’t exactly approved of by the Church in general, and as a daughter of strict Catholic parents I grew up believing all forms of sexuality were taboo subjects. This, understandably, presented a problem when coming to terms with my own queerness.

Let me be clear: I’m not criticising my parents. I became aware at around the age of fourteen that I was queer, and only really accepted it a couple of years later. Although I came out to my friends almost immediately, it would be another two years before I told my parents I was bi, which, even then, wasn’t strictly true – just easier than trying to explain pansexuality to them.

They were supportive and, if not understanding, they did try to wrap their heads around what I was telling them, and told me they would always love me, although they would prefer me to ‘date boys’. They apologised for not being able to accept it more, explaining ‘it’s just not how we were brought up’. Hearing this was a turning point for me: I felt a jarring between my sexuality and my upbringing that I’d previously been able to ignore.

I realise though that while there are a lot of issues between Catholicism and the LGBTQ+ community, it’s not necessarily the religious barrier that causes some parents to react badly, but a generational discrepancy. I know atheists who have had a similar attitude to their children coming out, as it is only in our generation that the LGBTQ+ community has become a broadly accepted part of (particularly Western) society. For most of our parents, regardless of faith, sexuality was a taboo subject through their childhood, and as a result some perfectly kind, reasonable people struggle to accept the gay community today. Religious people use their faith to explain their adversity to the LGBTQ+ community in the same way that only a few decades ago single mothers were shunned for having had pre-marital sex, or having gotten divorced. Western society has for a large part adjusted itself and so have most religious people. Today you would find it hard to come by a Catholic of our parents’ age who would condemn someone with a child out of wedlock, despite it being against the Church’s teachings. In a future generation I expect the same transition will have occurred with regards queerness.

In recent years we have seen that the two communities do not have to be mutually exclusive. A notable example is Chief Executive of Stonewall, Ruth Hunt, who is both a lesbian and a practising Catholic. In an interview with The Guardian in May 2015, she said: ‘It’s been harder for me to come out as a Catholic than it was to come out as a lesbian – easily … At least I had the backing of a community when I came out as a lesbian.’  This is something that resonates deeply with me.

The difficulty for me is that while the acceptance of queer people is increasing, the tolerance of religious people is on a steady decline. More and more, people are viewing Christians as narrow-minded, antiquated and judgemental due to a lack of knowledge of the Church’s teachings, and there’s a growing assumption that Catholicism promotes hatred. This just isn’t true. Catholicism teaches to condemn sin, but not those who carry it out, believing that everyone is a sinner but that we should love and respect each other without judgment. Or, in the words of Saint Augustine: ‘Love the sinner, hate the sin’.

This links to the argument by Rev. James Martin, a Jesuit priest, who has written a book entitled Building A Bridge about forming and strengthening relationships between the Catholic church and the queer community. He discusses, in an interview with The New York Times, how bizarre it is that Catholics tend to ‘look at LGBT people solely through the lens of sex’, pointing out that ‘we don’t treat any other person like that.’ He goes on: ‘Imagine seeing a group of college students—now most college students are sexually active—and asking, “Well, how can I possibly talk to this group of college kids? They’re all sinners.”’ Father Martin makes a good point, citing Pope Francis’ words ‘who am I to judge’, which came in response to a question on the LGBTQ+ community. In October 2016, Pope Francis said ‘When a person arrives before Jesus, Jesus certainly will not say, ‘Go away because you are homosexual’’. The Pope then went on to discuss transgender people, agreeing that they have a right to identify wherever they feel comfortable on the gender spectrum, regardless of sex at birth. The issue Father Martin points out is that Catholics tend to view homosexual people in light of their sexual activity and its assumed frequency, condemning them as sinners because of it, but don’t take the same stance with heterosexual people as often. He suggests that tolerance of sexual activity should be extended to queer people, in the same way it is naturally extended to the heterosexual community.

The Catholic Church isn’t perfect. There are people in it who are homophobic, who have viciously criticised Father Martin, not to mention anyone else who contradicts their personal views. There are too many of them – but they are not representative of what Catholicism stands for. At the end of the day, one of the most important teachings in the Catholic church is that one must ‘Love Thy Neighbour’. It appears throughout the Bible in a variety of phrasings, but each time reinforces the belief that as Catholics, before all else, we should treat others with respect. This is the teaching that I was constantly reminded of in my twelve years of Catholic education; the importance of love and respect for everyone. Yet the homophobia Catholicism has propagated is in opposition with this sentiment. While I cannot deny that there are passages in the Bible opposing homosexuality, there are none asking Christians to discriminate against, hate or persecute the gay community. Therefore, it seems to me that anyone acting this way in the ‘name of Christianity’ is corrupting the true meaning of the faith with their own, personal bigotry.

But there is progress. There is movement towards acceptance, and it is starting in the Church’s leaders and in its young people – the two most important groups in changing the outlook of modern Catholicism. However, while Catholicism must, and is, growing more tolerant of the LGBTQ+ community, the liberal left must, in response, grow more tolerant of Catholicism. After all, those of us who are members of both communities should not have to ‘pick sides’. While the LGBTQ+ community is not obligated or expected to extend its love to an institution that has historically propagated hate towards it, and is still embarrassingly far from reaching total acceptance, it must realise that to meet a Catholic is not to meet a homophobe. Absolute intolerance of religion only alienates individuals who identify with both groups –  individuals like myself – and pushes the two communities further apart. LGBTQ+ folk and Catholics are not enemies, and the sooner everyone realises that, the better.