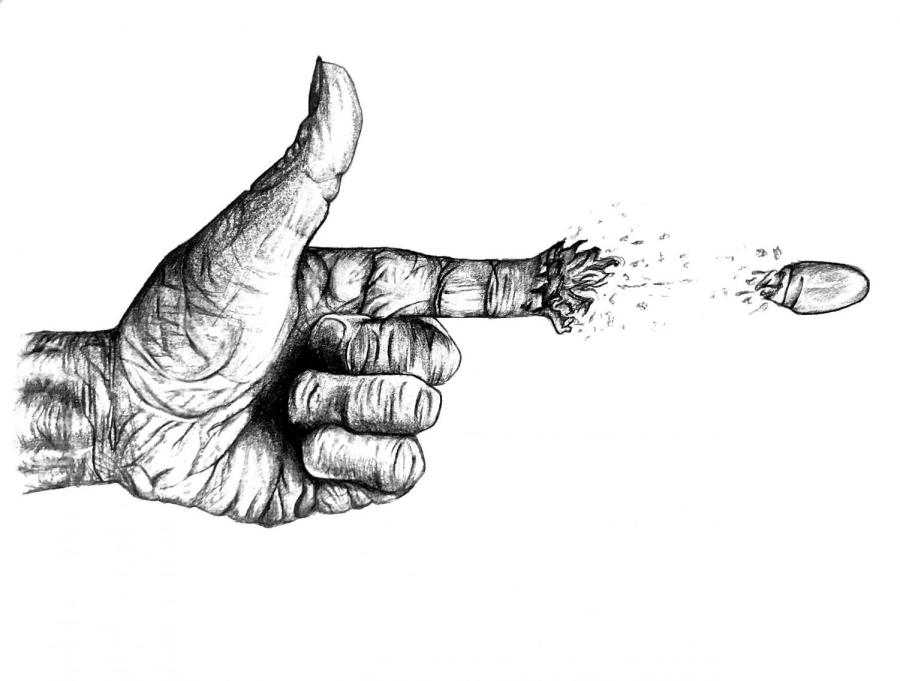 EVIE ROBINSON explores the depiction of gun violence in the novels of American writer Jodi Picoult.

A controversial, sensitive and polarising issue, gun violence and the ability to own a gun remains prolific on the American political agenda. The most recent wave of the Black Lives Matter movement, triggered by the shootings of Black individuals such as George Floyd and Breonna Taylor, has sparked debate over the possession of a weapon as a factor in instances of police brutality. With the legal right to bear arms enshrined in the Constitution, through the Second Amendment, many citizens defend their ownership of guns as a quintessentially American endeavour. There is certainly a dichotomy in American society between protecting the right to possess guns and controlling and regulating ownership of them.

Last year, I found myself wanting to find out more about this US phenomenon, and by chance, picked up A Spark of Light from my local bookshop. I finished the book in just a few days, completely captivated. This was the novel that instigated my love for Jodi Picoult and her talent for writing such gripping, poignant and heart-wrenching stories. Both A Spark of Light and Nineteen Minutes are emotionally intense reads, captivating the senses and making us long to find out what happens next. Picoult allows events to unfold slowly but convincingly, letting us become quickly attached to each character and leaving us reeling at every twist and turn.

The events depicted in A Spark of Light take place across a single day but unconventionally, as they are temporally reversed. A man takes a group of people hostage at an abortion clinic, ominously dubbed ‘the Centre’ due to its controversial status as the only centre in Mississippi where a woman can legally obtain an abortion. We begin at 5pm and work our way backwards, hour by hour, each one crucial to our understanding of gunman George Goddard’s motivations. As the events unfold and more clues are revealed, we as readers are tasked as investigators with piecing together the events of the shooting. We hear the voice and story of each character who visits the clinic, and the particular circumstances which led them there that day. The novel follows police hostage negotiator Hugh McElroy’s communications with the gunman, and the stakes become higher when events inside the clinic take a personal turn. A Spark of Light is a masterpiece in tackling two of America’s most controversial issues – gun violence and abortion –  in beautifully lyrical and moving writing.

In Nineteen Minutes – Picoult’s earlier novel dealing with gun violence as its central issue – the entire narrative unfolds in the space of just nineteen minutes. A certain duality is attached to the title; not only does it allow us to reflect on how such a short period of time can permanently alter so many lives, but it also represents in numerical terms the one teacher and nine students that Houghton kills during the shooting. Picoult takes us back through several periods of time: the childhood of her central characters, as well as their teenage years and memories of the shooting itself. In the years leading up to the attack, seventeen-year-old Peter Houghton is subjected to relentless torture by his classmates, bullied for his quirkiness and deviation from the status quo, and driven to breaking point. When police investigators search the Houghton residence for clues about the Sterling High mass shooting, they discover a complex and detailed computer game that Peter created, in which he could target, injure and fatally harm fictional avatars of his high school foes. Peter Houghton finds comfort in technological invention and creation, but instead of channelling this productively, his take is far darker.

Picoult’s writing manages to tackle the highly divisive issue of gun violence without telling us what to think, as she withholds her own opinion on the events she explores and narrates. Her true skill lies in the way she makes the reader feel, positioning them at the crux of the action and inviting them to draw conclusions about exactly who is right and wrong. For me, Picoult is a writer who highlights the capacity for literature as a tool of both political activism and reconciliation: her writing serves as an example of the sheer power of literature to challenge and transform the way in which we think about certain issues, and thus provoke meaningful change. Picoult transforms the political into the personal, giving the shooter a human face, digging into their past pains, traumas and what led them to perceive such violence as their only remaining option.

Acts of gun violence and mass murder are constantly on the rise in American society: from the Charleston Church shooting in 2015, in which nine African-American individuals were killed during a Bible study session, to the mass shooting a year later at Pulse, a gay nightclub in Orlando, where 49 people were murdered and another 53 injured. From 2011 to 2014, it was estimated that at least one mass shooting occurred every 64 days in the US, and there was a 32% increase recorded in the number of gun murders between 2014 and 2017. Armed with these sobering statistics, Picoult prompts reflection on what might lead someone to such a point of no return. She floods her reader’s head with questions: should we sympathise with killers? Must we hear their backstories and motivations before we make up our minds about their crimes? Or should they be othered and denounced as the root of a larger societal problem, as so many real-life perpetrators of gun violence often are? As gun violence continues to pervade the fabric of American society, it seems we are far from reaching a clear conclusion to these complex questions.