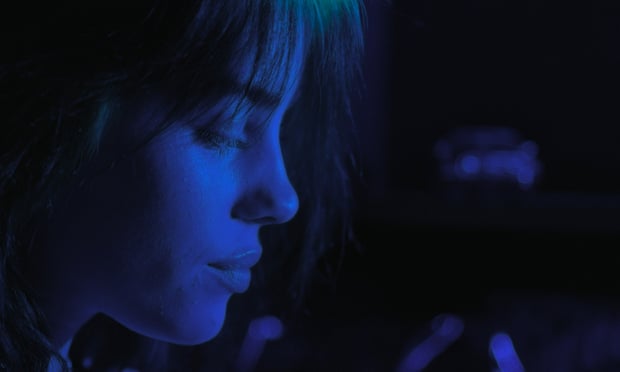 Billie Eilish’s rise to fame has been, in a word, surreal. Making her first viral hit at 13 years old, The World’s A Little Blurry (2021) follows Billie and her family as they produce her first album, complete multiple world tours, and ultimately win six awards at the 2020 Grammys. At first glance, The World’s A Little Blurry falls into the unglamorous category of films which have been made exclusively for, and will only be seen by, existing fans of the musical subject: another One Direction: This is Us (2013) or Justin Bieber: Never Say Never (2011). While The World’s A Little Blurry certainly belongs to that crowd, it stands at the front of the group and with its head held high. Dull on the cinematography front, consisting of home videos and wobbly documentary cameramen following  the family around, the ace up the film’s sleeve that makes it worth watching is Billie Eilish herself.

From the get-go, Billie’s pain and care for her art is palpable. She cries in fear of not delivering the best possible performance for her fans, who she says are more like a family to her, and laughingly admits to completely disregarding her mental health in order to stick to her schedule. She is so evidently exhausted and hardworking that at points it feels morally conflicting to be watching this documentary, as though I somehow gave her more work to do on top of balancing an international career and the stresses of growing up. If Cutler’s cinematography is uninspiring then editors Greg Finton and Lindsay Utz redeem him at least slightly with fantastic editing skills, which bring a certain poignancy to the whole experience. The intercutting of professional tour footage and personal home videos provides a very intimate vision of Billie, who alternates between dominating the stage as the world’s biggest pop star and spraying her mum with a hose while she cleans her first car in the driveway of her family home.

The star’s frankness with the world around her is oddly inspirational: she is unashamedly, unchangingly Billie, and does what she loves in the hope that her songs will give someone out there the message they need to hear. There are no pretences about her personality being false or that she’s holding anything back from the crew, which is clearest when she takes us through her personal journal, outlining the pages’ dark meanings and her history with self-harm. Anyone who knows Billie’s music knows there has been almost continuous controversy about her lyrics, which discuss suicide, drug addiction, and self-harm. After seeing The World’s A Little Blurry, it is easy to understand why Billie has become increasingly annoyed about journalists negatively nitpicking her writing. “I’m singing about the way I feel,” she explains, “it was never intended to be a statement”, laughing happily at a reporter who describes her album as “satanic”. To those who are unfamiliar with Billie, understanding that the discussion around the global teenage mental health crisis was unintentionally brought into society’s spotlight by her gives some understanding of her character, talent, and celebrity power.

It’s not all doom and gloom, however, and certain moments – such as Billie realising that Katy Perry’s fiancé who she hugged a couple of hours ago was Will Turner from Pirates of the Caribbean – are wonderfully innocent. “Can I meet him again?” she asks, dreamily scrolling through pictures of Orlando Bloom in costume on Google images. Moments like these are sadly infrequent; charming peeks into Billie’s life and genuine personality are lost to a bizarre amount of filler. At almost two and a half hours, the film is so undeniably bloated that Cutler places a thirty second intermission in the middle. An hour and a half highlights reel, without  unnecessary sequences of stages being constructed and planes taking off, would have made for a far more streamlined feature.

The World’s A Little Blurry is a film that will be a wildly different experience for each member of the audience due entirely to their age. Parents will be transfixed on Billie’s deeply personal struggles with mental health and Tourette’s syndrome, feeling sympathetic to her stressed and supportive parents who simply want her to be happy. Younger moviegoers will see Billie as some kind of badass, a no-fucks-given deity who balances all the world’s troubles at once and simultaneously creates incredible music. She is a complex, layered, and flawed character who commands the screen and stage, and all the audience can do is hope she’s alright.

Equally inspiring, heart-wrenching, and anxiety-inducing, Cutler’s best directorial decision is simply stepping back and allowing Billie to tell her own story. She carries the narrative with no added drama, no lies, no camera tricks. As with her music, Billie Eilish allows a frank look into her life and creative genius, and it feels wonderful to be along for the ride.