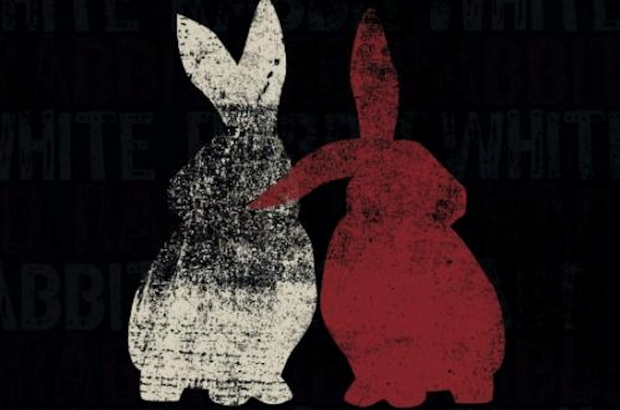 JOE JACKSON adventures through the fourth wall with Not I Theatre

While Samuel Beckett’s infamous one-person play, Not I, is a frustrating quest to try to connect the titular pronoun to an identity, the debut production from UCL-spawned Not I Theatre company centres around a distinctive, self-referential ‘I’: the voice of playwright Nassim Soleimanpour. A twisted master of ceremonies, the ‘I’ who conducts this subversive affair, is channelled tonight through the mighty improvisational skills of the formidable Ola Forman, together forming a devilish anti-narrative which surprises, perplexes and entertains in a wonderfully Beckettian manner.

After refusing to do military service, Soleimanpour was banned from leaving Iran: he responded by penning a transgressive, confrontational play, and White Rabbit Red Rabbit has travelled the globe in its author’s place, being performed in fifteen different languages.

It is staged in the performance area below a ‘Oooh, very nice’ Kentish Town pub, The Lion and Unicorn, which itself echoes the absurdity of a play showcasing rabbits alongside ostriches. Soleimanpour stipulates that the play’s solo performer may perfect their ostrich impression beforehand but is categorically forbidden from viewing the script until onstage.

‘And honest to god’ – Forman cannot contain a loud snigger, which is mimicked by pockets of the crowd – ‘she has some hard work ahead of her, because this is a cold reading and this poor actor is not really playing anyone, not me, not herself.’ A pause: stifled chuckles fill the surreal silence as Forman composes herself.

‘Honestly…’ Forman slips from solemnity to an infectious smile, reading ahead and heeding the preposterousness of her situation, ‘I don’t know what this actor is doing…’ Spluttering pockets of sniggering are now drawn into united, audience-wide laughter.

The billing for the show promises ‘precarious volatility,’ a tautology (or an oxymoron?) that informs a central tension in the play between its unrehearsed and disruptive elements and its smooth plotting and controlled performance. In fact, uncertainty is held in check and the haphazard flows forth only intermittently thanks to Forman’s uncanny ability to stabilise the play and firmly hold together its complicated meta-narrative that pushes the ‘post’ in ‘postmodern’ into the 21st Century’s sunset and beyond.

Although Soleimanpour’s plight occupies the play’s centre, Forman’s struggle with the script’s self-conscious instructions and the live performance’s wild trajectory charge each moment with risk, volatility and meaning, culminating in a current of energy which shapes and sharpens Soleimanpour’s underlying message of understanding and consideration.

White Rabbit Red Rabbit’s meta-narrative contradicts Roland Barthes’s famous 1960s assertion that the ‘Author is Dead’, staging an art experience where the creator’s intentions become part of the foreground, interacting with those of the actors and the company, and offering contexts which may, or may not, prove insightful to us as viewers.

Questions are raised when, all of us having been numbered off, audience member Number 5–flaunting long, white, floppy, rabbit ear-esque hair–is invited on stage to play a white rabbit parading as a red rabbit. These questions multiply with the exuberance of rabbits on heat when Floppy Hair, having returned to his seat, is found conveniently in possession of a notepad and red pen exactly when the play demands a notepad and something to stand in for a carrot.

Is Floppy Hair an undercover thespian planted in the crowd as a means of controlling the play’s volatility, or an innocent theatre-lover who happens to possess a predilection for Iranian postmodernism and an affinity for Ryman’s stationary– thus proving that chaos can be ordered by coincidence, that even the most preposterous of situations can inadvertently produce recognisable form and structure?

In the dark lower levels of an orderly, middle-class pub, during a theatrical event where the fourth wall is repeatedly and gleefully smashed, with audience-members dragged on stage at whim, both figurative and spacio-temporal realms merge into a fun, messy reality. All are disparate yet all are connected, we are individuals who belong to something bigger than our everyday narratives, all punctuated by the illusion of theatre. The frameworks of identity, nationality, convention and conformity are rendered necessary and absurd in our experience of Soleimanpour, Forman, Floppy Hair, the interactive audience and the Not I Theatre team, because negotiating reality demands negotiating contradictions.

With recent global events somewhat Trumping belief, the benign universe’s indifference towards our personal narratives can feel callous, unfair, ridiculous. Sometimes, however, if we are lucky, we glimpse something wonderful in the unexpected. Like the case of Forman and White Rabbit Red Rabbit, there are no rehearsals for tumultuous times: the best performances must come from those who show their teeth, bite the bullet, ride their ostrich into battle and embrace waves of chaos with the aim of conquest.