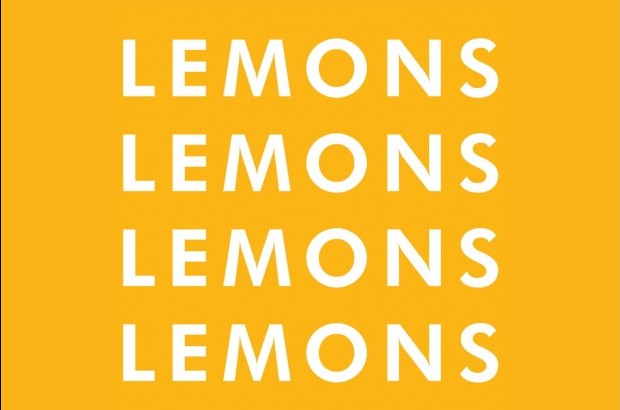 Sam Steiner’s Lemons Lemons Lemons Lemons Lemons seems built upon a series of questions: is democracy slipping between our fingers? Has public discourse broken down? How did we get to a place with newsfeeds, twitter-feeds and timelines providing megaphones to voices everywhere? Am I the only one in my own personal echo chamber unable to understand what’s going on around me?

Lemons makes a harmony out of these discordant worries and questions. The story is set following a previously unforeseeable  vote in favour of ‘The Hush Bill’, which leaves our characters, Oliver and Bernadette, with only 140 words a day to voice all insecurities and feelings within their relationship. This Orwellian setup provides a platform to probe censorship, social media and a myriad of current issues.

‘Initially, in 2015, people saw Lemons as a metaphor for social media, which it was. Later on that year in Edinburgh people responded to the word limit as reflecting austerity: this was after the 2015 elections and it was great to see how current events changed its reception. This year, people were talking about the similarity to Brexit!’ It is a mark of the success of Steiner’s script that, as he says, ‘people can take from it what they want’.

Lemons probes our ability to communicate, bearing witness to how hard it can be to say what you mean within a relationship, and the ways in which we develop idiosyncratic linguistic patterns with certain people. The play is concerned with an unusual and insightful strand of the current wide-ranging free speech debate: ‘how free speech is useless unless anyone is listening’. We may go and shout to the hills about something, but ‘nothing improves in society if we don’t listen and understand the significance of what others are saying. Often only the loudest voices are heard’. This, Steiner believes, is where democracy breaks down.

We are collectively being encouraged to care only about our own voices and ignore cultivating our capacity to listen: ‘social media has asked us to perform ourselves. This has made us overly self-conscious’.  As a result real communication is failing. Excessive speech and content leaves us saturated, unable to listen. Anything we attempt to take in remains merely on the surface for a matter of seconds, before spilling over the brim to be forgotten.

The sparse staging of Lemons exposes Oliver and Bernadette’s tactical word choices and failures to find the right word.  The frustration of having the words but not being able to use them has a chilling effect on the audience, but also echoes the plight of populations under extreme censorship. It is no wonder the rights for lemons are being bought by companies in Turkey.

Like Arthur Miller’s attack of McCarthyism via The Crucible, the significances behind Lemons run far deeper than what an audience member can glean from one sitting. It harnesses theatre’s specific power to get people into a room in order to probe what is going on in the world. If enough people take part in the conversation and do what Lemons tells us to do and listen, theatre can play a role in change the mindset of a whole population. Although times have changed significantly from ancient Athens, perhaps Steiner has a point when he says ‘it is no coincidence that theatre and democracy arose first in the same city’.

Lemons has just followed up a sell out run at the Edinburgh Fringe with another sell out run of dates this last week at the Camden People’s Theatre.